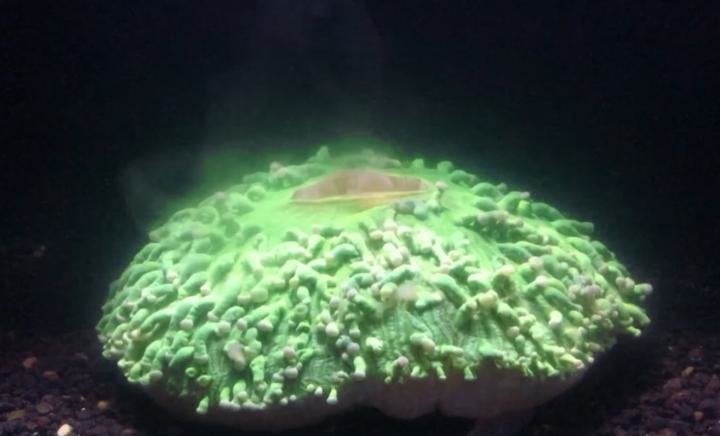 For the first time, scientists have captured coral bleaching on video. The time-lapse footage reveals how corals inflate and contract to pump algae out when they are under stress. The new findings, published August 5 in the journal Coral Reefs, offer insights into how corals are responding to climate change.

Normally, corals live in harmony with algae called Symbiodinium, which are the source of their bright colors. In exchange for providing shelter, the corals feast on sugars created by their algal tenants. But as waters warm, the algae become toxic to their hosts. Coral bleaching happens when stressed corals expel their algae, leaving themselves pale and cut off from food.

To see how this happens, researchers at Queensland University of Technology in Australia put Heliofungia actiniformis corals in aquaria and began to crank the heat up. Over 12 hours, the temperature in the tanks climbed from about 79 degrees to 90 degrees Fahrenheit.

Within two hours, the corals began to purge themselves of algae. You can see them expand and vomit “a green plume” of algae cells in the video. “What’s really interesting is just how quickly and violently the coral forcefully evicted its resident symbionts,” coauthor Brett Lewis said in a statement.

The corals survived 2 to 8 days in the heated waters, although the scientists noticed some tissue breakdown as the experiment wore on.

Corals worldwide are in the grip of most severe bleaching event on record. But some corals can recover from bleaching, if the surrounding water cools and they recover their denizens quickly enough. Previously, the team has found that H. actiniformis is more resilient than many other corals in the face of bleaching. The enthusiasm with which this species pulses to get rid of algae might actually be helping it survive until (or if) conditions become more favorable.