Under the Shroud of Mt. Pinatubo’s Massive Climate Impact

An experiment in global cooling 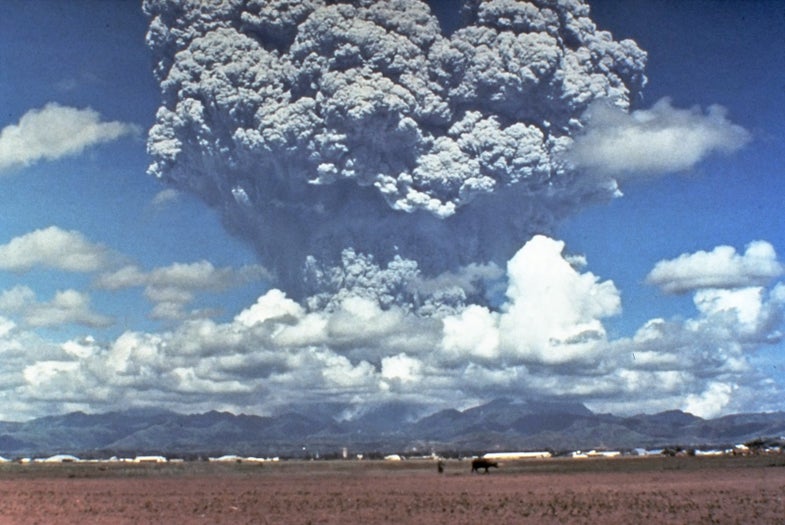 When Mt. Pinatubo erupted in 1991, it was a truly catastrophic event. Its gasses spread across the globe, and led to measurable cooling. Recently, climate scientist John Fasullo and his colleagues made a surprising discovery regarding that climatic shift. Combining altimeter data with computer modeling, the researchers learned that Mt. Pinatubo’s cooling event delayed the sea-level rise scientists have been expecting from global warming. The researchers presented their findings in Scientific Reports. Below, Fasullo shares his perspective on this discovery.

How extreme were Mt. Pinatubo’s emissions compared to those of other major volcanic eruptions, or even the steady releases from minor eruptions throughout a year?

The 1991 eruption of Mt. Pinatubo was exceptional for the amount of particulates that reached the stratosphere. Once there, they could persist for well over a year, whereas in the troposphere they get “rained out” in a matter of weeks. Only a handful of major eruptions in the 20th century were able to inject a similar particulate amount into the stratosphere. Steady releases from minor eruptions have very little effect due to their particulates being rained out relatively rapidly.

With a model for something as complex as global sea level, you need to manage a wide range of variables. Can you describe the model, what factors you could control, and factors that remain unknowns? How much computing power did the research require?

The capacity to simulate the broad range of processes influencing sea level is one of the major achievements of modern climate models, and particularly the Community Earth System Model (CESM) that we used for our work. The model is able to simulate the flows of energy and water through the climate system with remarkable success, and we have spent considerable time evaluating it through comparisons with the most recent satellite observations of these flows.

The major unknown relating to sea level is the contribution due to melting ice sheets, however our satellite data of such changes suggests that over decades, these contributions to sea level should be secondary to the effects of water expansion.

The model uses as inputs “forcings” from such things as solar intensity, aerosol emissions from both nature and human activity, greenhouse gases, and changes in the land surface (from deforestation and agriculture, for example). The model simulated a large number of fields—ironically sea level is not one—and so we have to estimate it from model fields like ocean heat content and terrestrial water storage.

Those who deny that humans are influencing climate often refer to the Mt. Pinatubo eruption as an example of nature outperforming humans in altering the atmosphere. While atmospheric scientists have long known volcanoes are a baseline above which humans add their emissions, how does your new research help bring closure to that question?

Our work does not seek to distinguish between the volcanic and human influences except for over a short interval when we concur that the influence of volcanic events can temporarily exceed that due to humans. It is worth noting that even over such a brief period, it takes an exceptional natural climate event to compete with the human influence, which is continuous and growing and hence leads to the accelerated change we identify.

How do your models compare with satellite measurements for sea-level rise?

One of the main challenges is that satellite data for sea level did not exist during—and even somewhat after—the 1991 Mt. Pinatubo eruption, so our best insight into sea level during these years is provided by our simulations. We can test other variations in sea level during the satellite record such as changes during El Niño and La Niña, and in this respect the model does quite well.

What aspects of sea-level rise are you researching next?

First, we are trying to use upcoming versions of the CESM to understand what near-future acceleration rates are likely to be, in essence to predict the acceleration that we anticipated happening in our Scientific Reports article, taking into account changes in cryospheric mass, in particular. The second effort is to explore the implications of the 19th and 20th century observed rates of sea-level rise for our understanding of climate change and variability, particularly before the satellite era when we have a relatively poor understanding of the global-scale flows of energy and water through the climate system.