Scientists just synthesized the deadly toxin of an adorable frog

Death in a test tube 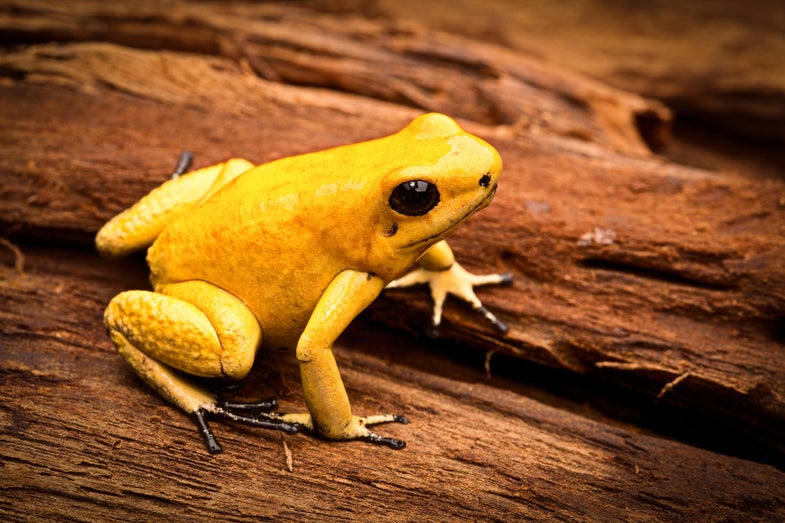 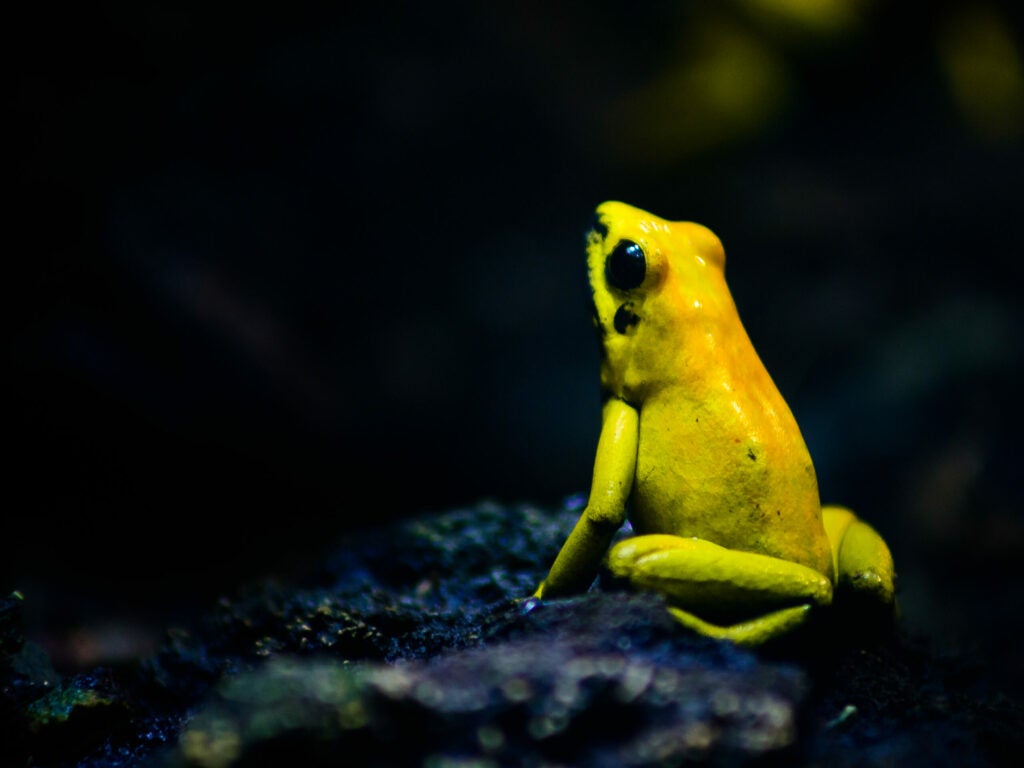 The toxin secreted by the skin of the golden poison dart frog (Phyllobates terribilis) can stop a person’s heart.

There’s just around 170 milligrams – somewhere between the mass of a one-carat diamond and the amount of caffeine in a Monster Energy Drink. That’s how much batrachotoxin (BTX) is left in the world, according to the most recently available figures. Found in the skin of the golden poison dart frog Phyllobates terribilis, this toxin is so potent that one milligram of it would be enough to kill between 10 and 20 humans. Its unique attack strategy makes it a promising subject of drug research, but the frog’s endangered status makes wild collection difficult. (Plus, since the frogs only produce BTX as a result of eating their natural diet in the wild, captive-bred frogs are useless for research, though they do retain their cuteness.)

Fortunately, a team of researchers has devised a way to synthesize the toxin, as well as its enantiomer, a mirror-image version of BTX. You may be wondering, “Who cares?” You may also be wondering, “Can I just see more pictures of these adorable little frogs?” You’re in luck! Popular Science would hate to disappoint you, so I’ll answer both questions. First, I’ll give you a cute picture of a golden poison dart frog, but only if you promise to stick around after. Just do it.

Now that we’ve all gotten a nice little dopamine surge from that cute frog pic, let’s talk about why synthesizing frog skin chemicals matters. BTX is a potent neurotoxin that opens voltage-gated sodium ion channels. These channels, when properly functioning, allow electrical signals to travel to our nerves and muscles. This enables us to walk around, breathe air, circulate blood, and do other basic stuff that living humans do.

But when BTX acts on voltage-gated sodium ion channels, they get stuck open. This renders muscles in a victim’s body inactive, stuck in a contracted state. You may remember learning in school that your heart is a muscle. You may also remember from a few sentences ago that BTX paralyzes muscles. If you connected the dots and realized that BTX stops your heart, here’s another golden poison dart frog as a reward!

Nature is a talented biochemical engineer. Over many amphibian lifetimes, BTX has evolved to bind very effectively to these voltage-gated sodium ion channels. In fact, it binds far better than most synthetic chemicals. One class of synthetic chemicals formulated to bind to sodium ion channels is local anesthetics. Matt Logan, a research scientist at biopharmaceutical company Gilead Sciences, is the first author of this new research. He tells Popular Science that this new research could help us develop more effective local anesthetic drugs. Since the binding site for BTX partially overlaps the binding site for local anesthetics, Logan says a better understanding of that overlapping portion could lead to anesthetics that bind more potently and more selectively to their targeted sites.

Developing anesthetics is not the goal of this research, though. The goal was to synthesize a naturally occurring molecule. But they did one better: They synthesized BTX and a mirror-image isomer of it known as an enantiomer. If BTX is a left-handed glove, then its enantiomer is like a right-handed glove. Since toxins typically evolve over time to fit highly selective binding sites in other animals, the scientists hypothesized that the enantiomer would not fit the binding site in the ion channel where BTX would normally fit. “Surprisingly, what we found in the lab is that the unnatural toxin enantiomer has similar potency to natural BTX but a completely different mode of action,” says Logan. While BTX is an irreversible sodium channel agonist, or opener, its enantiomer is a reversible antagonist, or blocker. “This result was quite unexpected,” Logan tells Popular Science.

On the left is the potent neurotoxin, batrachotoxin. On the right, its mirror-image isomer. The two molecules have the same makeup, but their methods of action are nearly opposite one another.

This second molecule (which is not found in nature) may help scientists enhance our understanding of how sodium ion channels work. It may not sound glamorous, but the proper functioning of these microscopic structures is essential to life. And since scientists will have access to a synthetic formulation of BTX, those cute little frogs will be a little bit safer from harvest. “By synthesizing batrachotoxin in the laboratory,” says Logan, “we no longer need to rely on the natural supply.”