The seemingly opposite conditions of autonomous sensory meridian response and misophonia could have quite a lot in common. 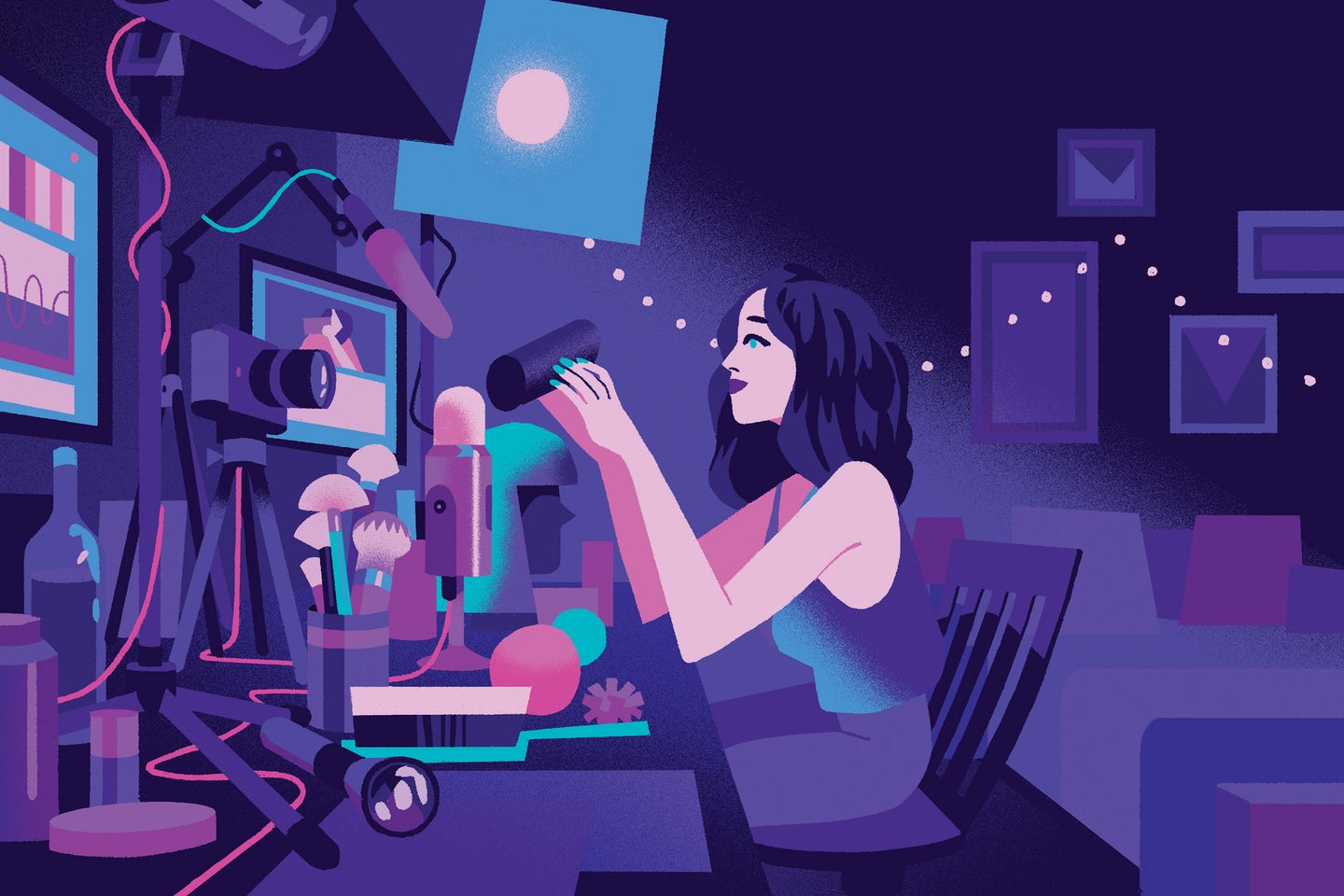 YouTubers use what little we know about ASMR to spark shivers of pleasure in their viewers. They transmit taps and swishes and ­crinkles created by countless objects and presented in clips fitting all sorts of styles. Here’s how vloggers carefully curate soundscapes and visuals to help sooth a squirming subscriber to sleep. Matteo Burton
SHARE

YouTube is a garden of digital delights: Celebrities invite you into their homes, algorithms serve up your favorite music, and strangers whisper you to sleep.

If that last one sounds weird, then you probably ­haven’t experienced autonomous sensory meridian response, or ASMR. For some, things like fluttering fingers and soft voices can trigger “brain tingles,” a pleasurable scalp prickling that cascades soothingly down the body.

Yet other viewers respond negatively to the same cues. Their revulsion is the result of a psychiatric condition called misophonia, in which things like chewing and lip smacking incite a fight-or-flight response. By some estimates, it affects about 20 percent of the population, some so severely they can’t even work or socialize. (We don’t yet know how many people experience ASMR.)

These extreme auditory responses are ­understudied and poorly understood phenomena. But researching ASMR and misophonia together could yield new insights into the mechanisms that underlie both, says Agnieszka Janik McErlean, a senior lecturer in psychology at Bath Spa University in England. Though the two reactions appear to be opposites (one means “hatred of sound” in Greek, while some describe the other as a “brain orgasm”), the noises that bring disgust and inspire bliss aren’t split down any logical line. The same video of a person crunching sloppily on a pickle can leave one viewer soothed and another enraged, as can a clip of someone squishing their fingers into a pile of slime. If scientists can detangle the pathways connecting audio to pleasure, the thinking goes, they might be able to bring the benefits of ASMR videos—​which viewers use to relax, fall asleep, and even cope with anxiety, depression, and post­traumatic stress ­disorder—​to the tingle-less masses.

McErlean herself had experienced ASMR’s signature shivers all her life but never thought to study them until 2014. While researching synesthesia—a brain quirk where different senses overlap to create colorful music or ­strange-​­tasting names—​one of her subjects described an additional sensation in response to certain sounds: a tingle. ­McErlean’s resulting lit search turned up hundreds of YouTube channels dedicated to stimulating ASMR but not a single scientific paper. “I was blown away,” she says. “It was a total mismatch.”

To understand how this internet craze actually operated, McErlean began work on a survey of people with and ­without the tingle. But she struggled to find a journal willing to publish her research, in part because the anomaly was easy to trivialize as a ­digital fad: The very name “autonomous sensory meridian response” was coined by cybersecurity professional ­Jennifer Allen, who formed an enthusiast Facebook page in 2010 (“meridian” replaces the potentially stigmatizing sexual connotation of orgasm with a more abstract reference to some developmental peak, while the rest of the phrase describes tingles in vaguely clinical terms). It wasn’t until 2015 that a pair of psychologists from Swansea University in Wales released the first paper on ASMR; McErlean’s data followed in 2017. Both studies defined the condition and identified common triggers, which include whispering, finger tapping, and hair brushing. To ­McErlean’s surprise, she also found that some people with ASMR reported extreme aversion to certain sounds.

That led her to misophonia, which audiologists first ­described in 2001. Experts still aren’t sure what causes it or how best to treat suffering patients, but even the small body of existing research provided McErlean with more reference material than her dive into ASMR. To start, she tapped the Misophonia Questionnaire, a scale developed by doctors at the University of South Florida in 2014. It ­assesses a patient’s symptoms and their severity, as well as the specific responses sounds elicit. The higher the score, the more likely a person will need professional treatment, like cognitive behavioral therapy, to cope. In a small 2018 study, ­McErlean found that 36 percent of subjects with self-reported ASMR had misophonia. Some of the randomly selected control subjects turned out to experience ASMR as well, and 70.8 percent of them fit the diagnostic criteria for misophonia. For those, McErlean suspects, discomfort triggered by some of the genre’s most popular noises could keep them from seeking out sounds that induce pleasant shivers.

Small-scale studies are providing crucial clues about the shared roots of the conditions. Both sensations set off a reaction in the body’s autonomic nervous system, which controls involuntary actions like breathing. When people with misophonia hear certain noises, their heart rates rise; when folks with ASMR get triggered, their tickers slow. Both groups also experience increased sweat on their fingertips, which psychologists consider a measure of nervous system arousal. In the throes of misophonia, this is a sign of discomfort; mid-ASMR twinge, it’s indicative of rapture.

People with intense reactions to sound—whether it’s love or hate—also have structural differences in their brains. Many misophonics have more myelin (which insulates neurons and speeds the spread of information) than average in the ventromedial prefrontal cortex, an area associated with quick decision-making. That might be why people go “from zero to 60” in their reaction to triggers, says Jennifer Brout, a psychologist who specializes in misophonia counseling. Sufferers register a rustle or a lip smack as threatening before they can even identify it. By contrast, scans have linked ASMR to changes in connectivity across various regions of the brain, which could hinder someone’s ability to control emotional responses to such stimuli.

Some of the audible triggers for misophonia and ASMR overlap

Misophonic gray matter also might warp reality. Our brains constantly assess our body’s internal state, a “sixth sense” known as interoceptive awareness. When it goes awry, though, it contorts perception of the body like a fun-house mirror. Faulty interoception is associated with many mental health issues, including eating disorders and obsessive compulsion. Experts like Brout speculate that misophonia might also trigger hyperactivity in this region, sending sufferers into an agonizing feedback loop where physical symptoms of mild discomfort, like elevated heart rate, worsen simply because one begins to focus on them and grow more anxious. Researchers are looking into a similar link with ASMR, where heightened awareness might increase the intensity of the signature shivers.

These preliminary brain scans and survey studies are just the first whispers of a long and complicated conversation about love, hate, and mouth sounds. Some of the questions psychologists want to answer next could, perhaps, help us all calm down. YouTubers want scientists to pay more attention to the role nonauditory triggers such as hand movements play in stimulating the tingles. McErlean seeks to understand how ASMR alters stress-​­reducing hormones like oxytocin. Brout thinks these cumulative efforts could in turn help misophonics cope; at least one of her patients now watches ASMR videos to help soothe symptoms of a misophonic attack. What started as an internet trend could help uncover deep truths about the way we experience sound—and perhaps help us compose a more ­pleasurable world for everyone.

This article was originally published in January 2020. It has been updated.