This looks totally alien (but it's also totally ordinary) 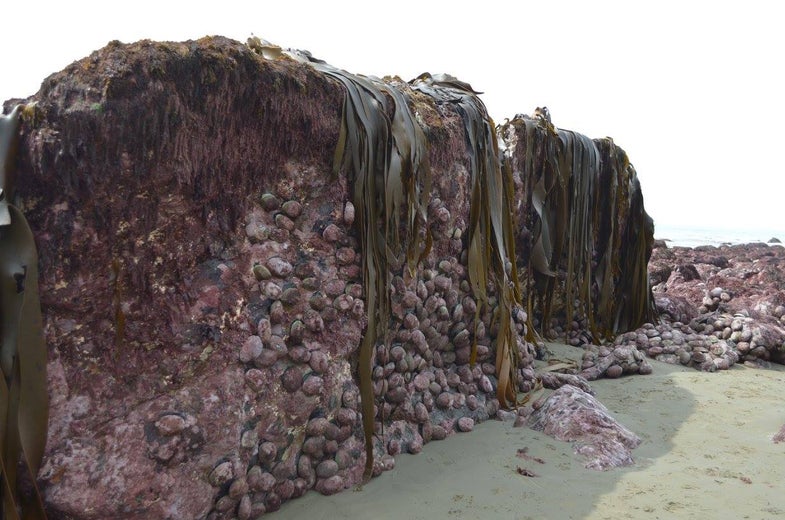 A beach in New Zealand just got a new tourist attraction: a six foot wall of seabed.

The mass of rocks and seaweed comes courtesy of a 7.8 magnitude earthquake that thrust parts of the sea floor up and out of the water on Monday. It triggered tsunamis and landslides, stranded thousands, and killed at least two. But it’s the bizarre photos of the newly emerged seabed that are making the disaster go viral.

Some of the landscapes look completely alien, even though the cause is entirely terrestrial. This is the wonder of plate tectonics. The enormous slabs of Earth’s crust that our continents and oceans sit atop are not stationary. They move around, mostly at rates so slow that we can’t tell there’s movement at all (except by using scientific instruments). Mostly the plates exert a constant, gradual force in one direction or another.

This is how Mount Everest was formed. This is why South America and Africa fit together like giant puzzle pieces. The plates move, and they either collide into each other, separate, or slide past each other. Collisions make mountains, separations create valleys and oceans, and sudden slides causes earthquakes.

The Australian and Pacific plates meet at a series of fault lines right under New Zealand. Sometimes those plates slip past each other in little spurts instead of sliding along gradually — that’s what an earthquake is. And New Zealand is rather prone to earthquakes as a result — there are about 15,000 every year, 150 of which are strong enough for people to feel. This earthquake just happened to rupture an unusual number of fault lines and push them up, instead of the more common side-to-side motion.

A similar shift occurred back in 1855. A magnitude 8.2 quake hit the shoreline between the towns of Wellington and Hutt Valley, pushing a chunk of the coast upwards. Before the earthquake, the road between the cities used to be low enough to flood at high tide. Afterwards, it was safe to drive at any time.

So I guess earthquakes aren’t all bad? If we ignore the death and destruction, New Zealand is really just gaining beachfront property. And who doesn’t want a giant wall of rotting seaweed on their beach?