Here’s a newt that kind of looks like a Klingon 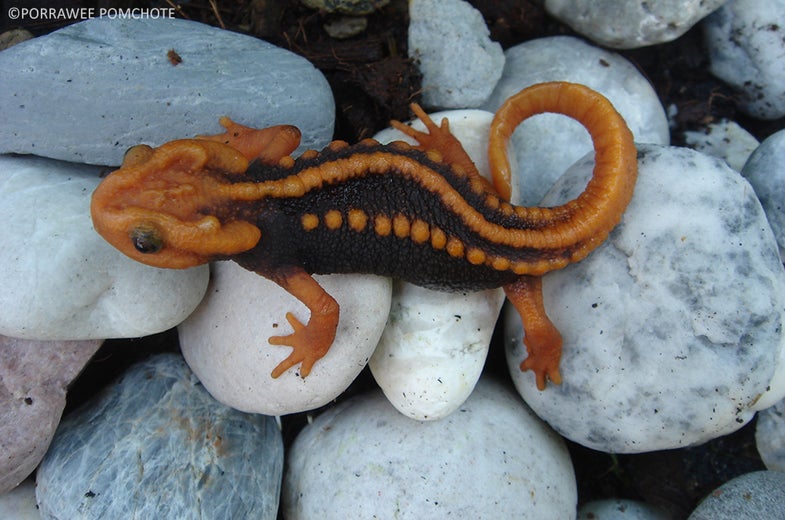 Listen up, nerds: We need to talk about this Klingon newt.

This intergalactic amphibian (Tylototriton anguliceps, one of a handful of newt species native to Thailand) is just one of a staggering 163 new species found along the Mekong River in Southeast Asia in 2015.

“From its origins in China’s Tibetan-Qinghai Plateau to Southern Vietnam where it empties into the South China Sea,” the World Wildlife Fund writes, “the river acts as the backbone of a region where the wildlife is as diverse as the 300 million people that call it home.” Over 2,400 new species have been found in the area in the past 20 years.

Another 2015 find is a reptile that the WWF has dubbed the “Ziggy Stardust snake,” a reference to one of the late David Bowie’s many glamorous stage personas. The resemblance is pretty striking.

Parafimbrios lao—the lucky number 111 snake species in Laos—is distinguished from its close relatives by its unique coloring, among other things. The glitzy reptile actually represents an entirely new genus, but researchers were fortunate enough to stumble upon two examples of the unique snake during their expedition.

Super bio-diverse regions like the Greater Mekong—areas where loads of new species await our discovery—serve as a reminder of just how much we have left to learn about our planet.

But it’s not all Star Trek references and sunshine: While it’s exciting for scientists to find heaps of new creatures, it also highlights just how much we have to lose as our climate continues to warm and change. Many of the species found in and around the Mekong River exist only there, and in small numbers. Slight changes in local conditions could throw these plants and animals completely out of whack, wiping them out before they can even be known to science. And more immediate threats—construction projects, poaching, and bushmeat hunting, for example—are already pressuring these unique fauna.