It exploded from a tropical storm to a category five in just 27 hours. 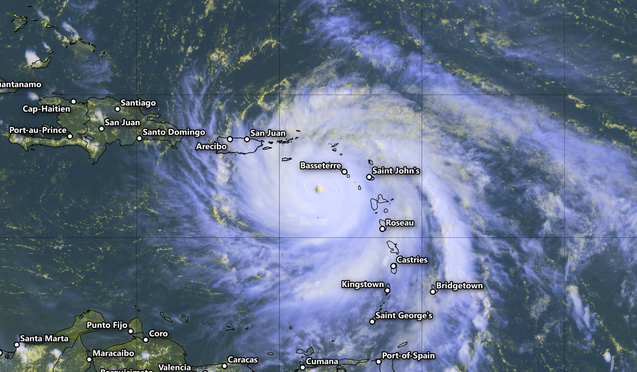 The second scale-topping hurricane to make landfall in the past two weeks will tear through Puerto Rico and the Virgin Islands on Wednesday, bringing to a climax one of the most severe hurricane seasons in recent memory. On Monday evening, Hurricane Maria rapidly strengthened into a category five shortly before striking the small island of Dominica. The tiny eye of the storm happened to hit the island of more than 70,000 people head-on, creating the latest in a string of humanitarian crises set forth by an unusually intense hurricane season. The island nation’s prime minister reported on Tuesday morning that his country was devastated, grimly stating on Facebook that “we have lost all what money can buy and replace.”

It usually takes a couple of days for a storm to slowly build up its strength, but Maria is a reminder that this isn’t always the case—rapid intensification can occur in developing hurricanes with little or no warning. The hurricane exploded from a tropical storm to a category five in just 27 hours. Official forecasts from the National Hurricane Center predicted that Maria would indeed undergo rapid intensification, but the storm still managed to grow faster and stronger than predicted. The forecast issued at 5:00 AM EDT on Monday called for Maria to grow into a category three hurricane by Tuesday morning and a category four by Wednesday. The storm reached category five intensity just 15 hours later.

If a storm encounters favorable conditions—factors like warm waters, light winds, excellent venting of rising air, and ample moisture—its internal structure can come together faster than both computer models and humans expected. Sometimes it only takes a few hours for a solid eyewall and deep, clear eye to develop. A clear eye allows the deep thunderstorms in the eyewall to pull massive amounts of air away from the surface and vent it up and away from the hurricane. This process creates a deep low-pressure center at the surface, and the dramatic pressure differences between the center of the storm and its surroundings can crank up the winds in a hurry.

Most of the intense storms we’ve seen in the Atlantic this year underwent rapid intensification. Hurricane Harvey leapfrogged from a ragged tropical depression to a picture-perfect category four hurricane in 48 hours as it approached the Texas coast in August. Hurricane Irma’s maximum winds grew from 140 MPH to 175 MPH—the same as Hurricane Andrew at its strongest—in a mere 12 hours.

The National Hurricane Center expects Maria to make landfall in the Greater Antilles early on Wednesday morning. Hurricane Maria’s core is compact enough that tiny wobbles in its path will determine who sees the worst conditions, but all of the Virgin Islands and Puerto Rico are in grave danger when the storm approaches. Unfortunately, the islands in the hurricane’s path are spread out in such a way that someone, somewhere will almost certainly get hit with the storm’s full fury. Forecasters on Tuesday afternoon expected Maria to slightly weaken—a relative term in this type of situation—before making landfall, but it could easily maintain its strength as it draws closer on Wednesday.

Hurricane Maria is small; the eye of this category five hurricane is just 11 miles wide. But it’s a powerful system nonetheless, with winds increasing to 165 MPH on Tuesday afternoon. The storm’s size is its saving grace—strong winds will cause widespread damage, but only a small area will see the horror of a landfalling category five hurricane. Winds in excess of 74 MPH only extend a few dozen miles away from the eye, and the core of catastrophic winds occupies just a tiny portion of the northeastern eyewall. That’s not much comfort to those in the storm’s path, but it will help to prevent an even larger catastrophe.

Still, the effects of this hurricane will be devastating and long-lasting, sowing destruction reminiscent of what Hurricane Irma so recently left behind. Winds will be even stronger at higher elevations, further exacerbating the tornado-like damage the eyewall could cause. A storm surge—sea water pushed inland by a storm’s strong winds—up to nine feet above ground level could devastate coastal communities, especially those areas on the southern and eastern shores of the affected islands. Extremely heavy rain will cause life-threatening flash flooding and mudslides.

Hurricane Maria would be a heavy blow under any circumstances, but the islands affected by this powerful hurricane have a recent history of devastation. Floods and mudslides triggered by the passage of Tropical Storm Erika in 2015 killed dozens of people on Dominica. The looming storm will compound issues left behind by Hurricane Irma earlier this month in Puerto Rico and the Virgin Islands. The Daily Beast reported on Saturday that 80,000 customers in Puerto Rico were still without power nearly two weeks after the previous storm brushed by the island. The core of Hurricane Irma—at the time also a category five—passed north of the island on September 6, but the hurricane’s expansive and damaging wind field still blanketed the island. Puerto Rico’s fragile electricity infrastructure could take a substantial hit from Maria, leading to extensive blackouts that could last for weeks or months after the storm.