In cities across the US, police have been shooting rubber bullets into crowds. Here’s how you can protect yourself. 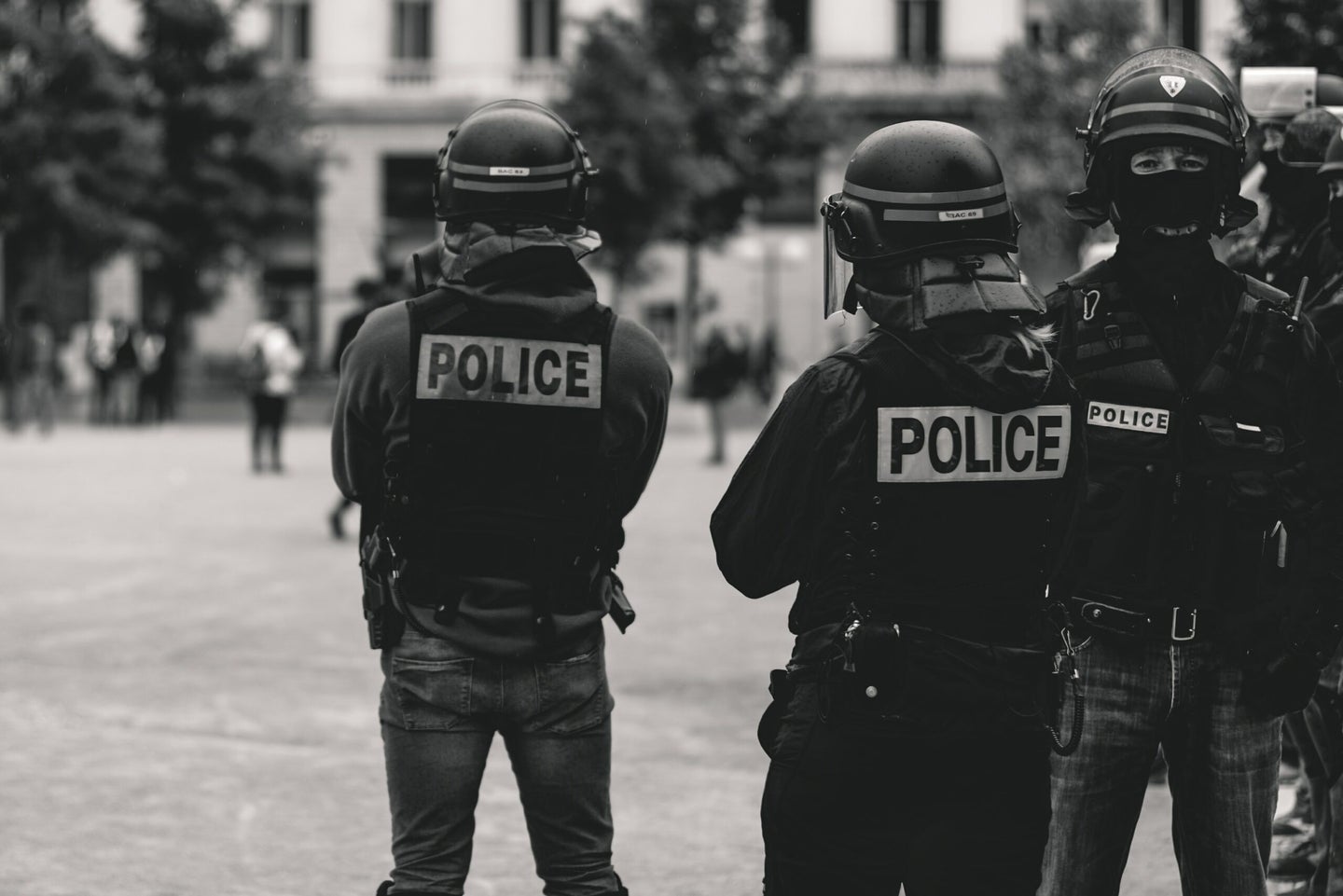 “Nonlethal” weapons, like rubber bullets, have been used by police personnel since the 1880s and they are far more dangerous than they may seem. Unsplash
SHARE

Fifteen minutes before curfew at 9 p.m. in Minneapolis, on May 29th, photojournalist Linda Tirado lost her left eye. She doesn’t remember much from the rest of the night, only the feeling of her face exploding and her goggles shattering. “I squeezed my eyes shut and started screaming,” Tirado says.

Someone grabbed her hand and pulled her out of the tear gas, saying, “Come with me.” Tirado was herded into an old 1970s-style van, where a street medic bandaged her eye, which had been directly hit by a rubber bullet, shot from the direction of the police. Within an hour of her injury, Tirado’s eye underwent intensive surgery. The impact of the projectile bullet had lacerated her eyebrow and detached her retina, as well as caused serious trauma to her eyeball. “My prognosis is I will be able to see light and shadow, maybe movement,” says Tirado. “I won’t be able to tell if it’s a dog or a tree.” Now, resting and recovering at home in Nashville, Tirado has been on anti-vomiting medication and cough drops, because any coughing or vomiting spell would put extensive strain on her injured eye.

Tirado has covered multiple protests in the past, including those in Ferguson, Missouri in 2014. But never before had she anticipated high-speed projectiles, like rubber bullets. “I hadn’t been worried about being in the path of projectiles because it seemed fairly unfathomable that police would be targeting journalists like they are,” says Tirado. She quickly realized that the police were acting indiscriminately—attacking anyone from camera crews, photojournalists, reporters, to protesters. Before heading out that Friday night, she donned a pair of high-end welding goggles, only to find that they shattered on her face due to the impact of the rubber bullet.

Tirado’s experience isn’t an isolated case—across the country, police have been deploying so-called “nonlethal” weapons, from rubber bullets, tear gas, flash grenades, to beanbags. Two nights ago in downtown Sacramento, California, eighteen-year-old Dayshawn McHolder was shot directly in the face via rubber bullet by a police officer, suffering a broken jaw and excessive bleeding, before he was carried out of the crowd to the hospital. Police officers followed him to the hospital to incite him on charges of assault on police. About three other incidents of injured and blinded eyes have occurred, according to Tirado.

What are rubber bullets?

“Nonlethal” weapons have been used by police personnel since the 1880s. Among the first reported cases was when Singapore police shot sawed-off broom handles into crowds. Police clubs have been in use ever since policing first began. During the Civil Rights Movement in the 1960s, police deployed water hoses and dogs to attack protesters, and “prevent people from being able to move as a nonlethal way of brutalizing people and terrifying them,” says Carolyn Roberts, a professor of African American Studies and History at Yale.

Rubber bullets, however, were first introduced by the British army in 1970 to control protests in Northern Ireland. Soldiers killed three protesters with rubber bullets, one of them an eleven-year-old boy named Francis Rowntree, and blinded another child, Richard Moore, before the UK switched to supposedly safer plastic bullets in 1975. Both rubber and plastic bullets were designed to be shot at the lower half of the body or the ground, but ended up killing 19 people, mostly due to head injuries.

Many countries, including the United States, still use rubber bullets to this day, mostly for animal control, riots, and protests. Hong Kong police have been seen shooting protesters directly in the head with rubber bullets. In Chile, a bandaged eye is now a rallying symbol amongst protesters. In November, a twenty-one-year-old college student, Gustavo Gatica, was shot by rubber bullets in both eyes. He’s now completely blind. At the time of the protests in November, 285 Chileans had suffered from severe eye damage from the police’s use of rubber bullets.

How dangerous are rubber bullets?

Now, as violence erupts in cities across the United States such as Minneapolis, Los Angeles, New York City, Oakland, and countless others, reporters and protesters have documented police officers’ use of tear gas and rubber bullets. 4100 protesters were arrested over the weekend, across 40 U.S. cities. Images circling around Twitter and news reports reveal open gash wounds, dark purple bruises and welts, bloodied and blinded eyes, head wounds, and bone fractures.

These scenes call into question how “nonlethal” rubber bullets actually are. The weapons, which are projectiles coated in rubber about 2.5 cm in length, are shot from standard firearms or specialized riot guns. Originally, the bullets were designed to be shot at peoples’ lower bodies in order to disperse violent crowds—in other words, alternative, safer ammunition to keep someone at bay without lethally injuring them. According to the 2018 Consultation Text for Geneva Guidelines on Less-Lethal Weapons and Related Equipment in Law Enforcement, developed by the Geneva Human Rights Platform, rubber bullets must be carefully used by police officers to control violent crowds.

The guidelines claim that rubber bullets should be fired “against the lower body of a violent individual when a substantial risk exists of immediate serious injury to either a law enforcement official or a member of the public,” and never directly aimed at the head or torso. The document also advises against firing into the ground, in case of dangerous ricocheting. The United Nations published similar guidelines in 2020, and police departments across the U.S. have yet to release their own.

But some police officers have been disregarding the aforementioned guidelines. “Rubber bullets basically fire out of the weapon pretty much as fast as a bullet,” says crowd control weapons expert Rohini Haar to Prevention. The bullets are made of hard plastic, unlike Nerf gun bullets, and once fired, have a wildly unpredictable trajectory if fired at a far range. Most victims of rubber bullets are shot at extremely close range, so they are usually shot at as hard as the bullet comes out.

Victims have described the feeling on Twitter. “It feels like a brick hitting you at 15 mph.” “If this is what getting hit by a rubber bullet feels like, I never want to experience the pain of an actual gun.” The most common injuries from rubber bullets are bruises, welts, abrasions, and contusions. More extreme injuries include bone fractures, internal organ injuries, and death, especially at close range. The most vulnerable part of your body to rubber bullets are always the eyes.

St. John Eye Hospital in Jerusalem conducted a study published in Nature in 2003 on eye injuries caused by rubber bullets, and discovered that orbital fractures, when bones around the eye area break, are extremely common when a rubber bullet hits the eye area. The fractures often penetrate and damage the eye nerves and the retina. More than half of the victims require surgery, and nearly 53 percent never fully recover their vision.

How can you protect yourself from rubber bullets during a protest?

To protect yourself from rubber bullets in a protest, ballistic-rated safety glasses and goggles with an airtight seal are crucial. These can protect your eyes not only from rubber bullets but also tear gas, water cannons, smoke, and debris. Do not wear contact lenses, which can trap tear gas and cause more damage to the eye. Regular safety goggles can be a hazard, especially if they’re susceptible to shattering when confronted by a high-velocity rubber bullet.

Wearing a helmet is another way to protect yourself from head injuries, whether caused by bullets, bodily falls, or projectile debris. Even bicycle or motorcycle helmets can increase your safety. And keep your skin covered—any form of sturdy clothing, whether it’s heavy cloth, flannel, or leather, will help decrease injuries to your body. Try to decrease any amount of skin showing on your body. Males can also consider wearing a cup to protect themselves even further.

Protesters are also known to have created makeshift body shields for themselves by using sturdy tape to attach sheet metal, thick hard plastic, sturdy cardboard, leather, or kevlar to the inside of their clothes. Makeshift shields made of plywood or other similar materials can also be useful for blocking rubber bullets, a tactic used by protesters in the 2014 Ferguson, Missouri protests. As much as you want to protect yourself, make sure not to wear protective clothing that looks too military or police-like, which may confuse protesters around you. Before wearing or bringing anything to a protest, especially when it comes to body armor or body shields, make sure to check your state’s laws for any regulations.

To protect yourself from tear gas, do not apply any creams or cosmetics to your face, as this can make it more difficult to wash chemicals from your skin. Wear a gas mask, if you own one, or a half-face respirator, which can be cheaper but doesn’t provide as much protection as a gas mask. As a last resort, a simple face mask is better than nothing. Consider bringing gloves to protect your hands, and bring water with you to rinse your face, mouth, eyes, and hands in case you’re exposed to tear gas. Some say that mixing Campden tablets (normally used as a sanitizer) with water can help neutralize the burning feeling on the skin that tear gas causes.