The trauma resurfaces in movies, shows, and comics over and over, showing its deep impression on Japanese families and culture. 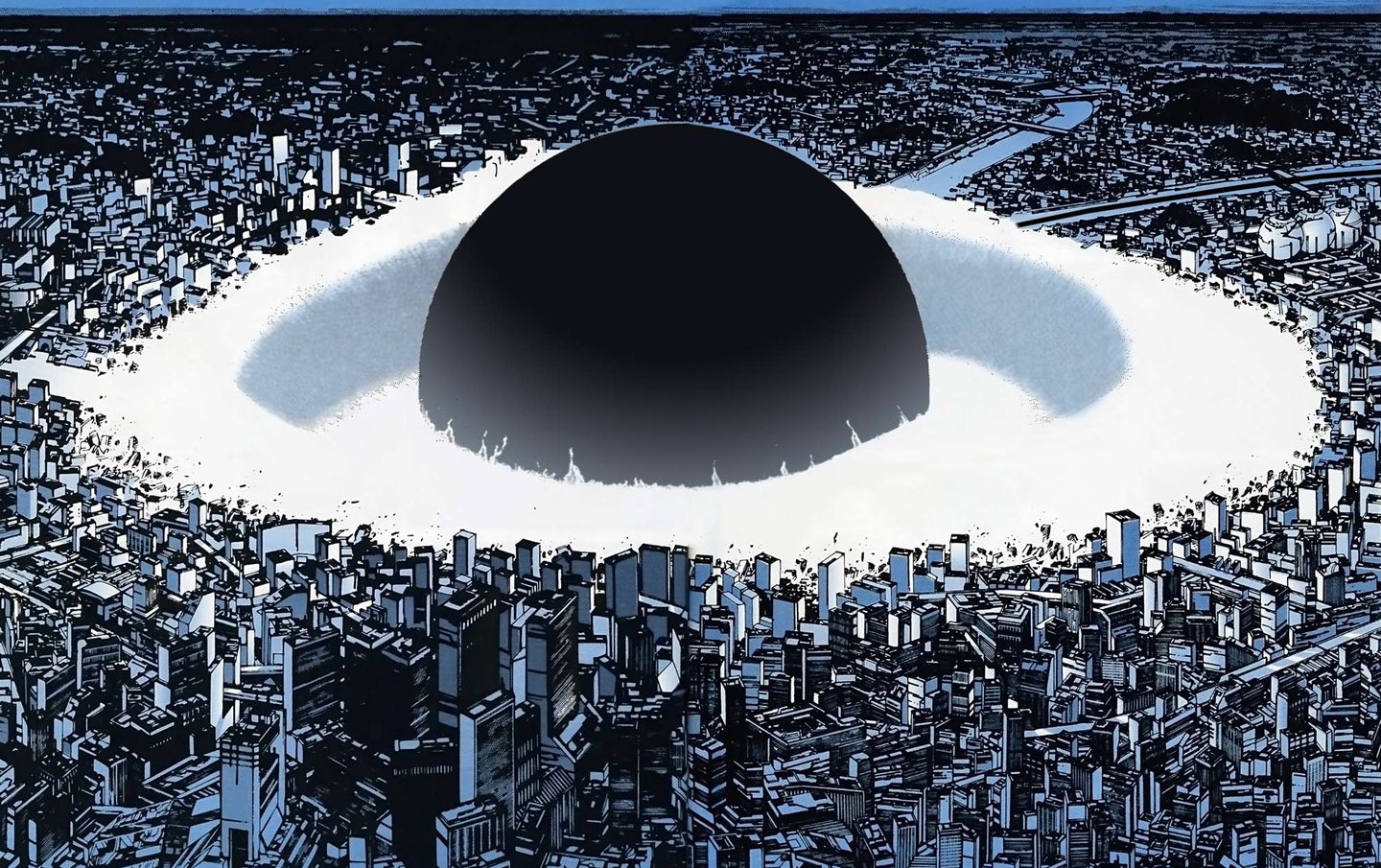 Neo Tokyo – the setting of the popular anime film ‘Akira’ – is about to explode. Neo Tokyo
SHARE

Frank Fuller is an adjunct professor of political science at Villanova University. This story was originally featured on The Conversation.

At the end of Katsuhiro Otomo’s dystopian Japanese anime film Akira, a throbbing, white mass begins to envelop Neo-Tokyo. Eventually, its swirling winds engulf the metropolis, swallowing it whole and leaving a skeleton of a city in its wake.

The atomic bombings of Hiroshima and Nagasaki–along with the firebombings of Tokyo–were traumatic experiences for the Japanese people. It’s no surprise that for years, the devastation remained at the forefront of their conscience, and that part of the healing process meant returning to this imagery in literature, in music and in art.

The finale of Akira is only one example of apocalyptic imagery in the anime and manga canon; a number of anime films and comics are rife with atomic bomb references, which appear in any number of forms, from the symbolic to the literal. The devastating aftereffects–orphaned kids, radiation sickness, a loss of national independence, the destruction of nature–would also influence the genre, giving rise to a unique (and arguably incomparable) form of comics and animated film.

The directors and artists who witnessed the devastation firsthand were at the forefront of this movement. Yet to this day–75 years after the bombs–these themes continue to be explored by their successors.

An iconic filmmaker paves the way

We can see the lasting images of the firebombings and the atomic bombs in the works of artist and director Osamu Tezuka and his successor, Hayao Miyazaki. Both had witnessed the devastation of the bombings at the end of the war.

The bomb became a particular obsession of Tezuka’s. His films and comics both address themes like coping with grief and the idea that nature, in all its beauty, can be compromised by man’s desire to conquer it.

His stories often have a young character who is orphaned by particular circumstances and must survive on his own. Two examples are Little Wansa, about a puppy who escapes from his new owners and spends the series looking for his mother; and Young Bear Cub, who gets lost in the wild and must find his own way back to his family.

The tensions of technology are apparent in the works of Tezuka and his successors. In Tezuka’s Astro Boy, a scientist attempts to fill the void left by his son’s death by creating a humanlike android named Astro Boy.

Astro Boy’s father, seeing that technology cannot replace his son completely, rejects his creation, who is then taken under the wing of another scientist. Astro Boy eventually finds his calling and becomes a superhero.

Like Tezuka, the award-winning animator Hayao Miyazaki witnessed some of the American air raids as a child.

Miyazaki’s work often refers to the abuse of technology, and contains pleas for human restraint. In Nausicaa of the Valley of the Wind, the radioactive mutants populate the land; at the beginning of the film, the narrator describes the strange, mutated state of Earth as a direct result of man’s misuse of nuclear technology.

In the postwar years, Japan grew into an economic superpower. Possessing a fascination with technology, the country became a world leader in the production of cars and electronics. Yet in characters like Astro Boy, we see some of the tensions of the modern age: the idea that technology can never replace humans, and that technology’s capacity for helping mankind is only equaled by its capacity to destroy it.

There were also the aftereffects of the bombs, some of which are still felt today: children left parentless, others (even the unborn) left permanently crippled by radiation.

For these reasons, a recurrent theme in anime films is the orphan who has to survive on his own without the help of adults (many of whom are portrayed as incompetent).

Akiyuki Nosaka relayed his personal experiences as a child during the war in the popular anime film Grave of the Fireflies, which tells the story of a young boy and his sister escaping from the air raids and the firebombings, scraping by on whatever rations they can find during last part of the war.

Meanwhile, there are often young, powerful female orphans or independent female youths in Hayao Miyazaki’s works, whether it’s in Kiki’s Delivery Service, Howl’s Moving Castle, or Castle in the Sky.

Likewise, in Katsuhiro Otomo’s Akira, the adults are the ones who squabble: they jockey for power, and their lust for control of the strange, alien technology of Akira causes the atomic-bomb-like catastrophe at the end of the film. The teenage characters, on the other hand, display common sense throughout the movie.

The message seems to be that adults can be reckless when man’s desire for power and ambition outweigh what is important on Earth. And the children, still untainted by the vices that overtake humanity in adulthood and innocent enough to the point of thinking rationally, are the ones who end up making the most practical decisions overall.

Many families were orphaned by the war, and the bomb as well, so a number of children were also mutated or affected by the bomb. In anime and manga, this is seen in the form of radioactive mutations or having some extraordinary powers, in addition to taking on more adult responsibilities at an early age.

A number of films feature characters who display special powers or abilities, with radiation often being the main cause. Several films exploring the idea of unusual events or experiments resulting in young persons having exceptional abilities include Inazuman in the comic of the same name and the character Ellis in the comic El Cazador de la Bruja (The Hunter of the Witch).

Additionally, the manga series Barefoot Gen tells the story of a family wiped out by the atomic bomb, with a young boy and his mother the only survivors. Author Keiji Nakazawa loosely based these comics on his own life: Growing up, Nakazawa watched a sister die several weeks after birth from radiation sickness, and witnessed his mother’s health quickly deteriorate in the years after the war.

Death, rebirth and hope for the future

Osamu Tezuka believed that the atomic bomb acted as the epitome of man’s inherent capacity for destruction. Yet while Tezuka commonly referenced death and war, he also believed in the perseverance of mankind and its ability to begin anew.

In a number of his works, both a futuristic and historic Japan are seen, with the themes of death and rebirth being commonly used as plot devices to symbolize Japan’s (and the lives of many Japanese) wartime and postwar experiences, including the aftermath of its destruction after the bombs fell. But much like the Phoenix – the mythical bird that sets itself on fire at the time of its death, only to experience a rebirth–Tezuka’s Japan experiences a resurrection, which mirrors Japan’s real-life postwar ascension to world superpower.

In fact, Phoenix was the title of Tezuka’s most popular series, one that the artist considered his magnum opus. The work is a series of short stories dealing with man’s search for immortality (given or taken from the Phoenix, which represents the universe, by man’s drinking some of its blood); some characters appear several times in the stories, mostly from reincarnation, a common precept in Buddhism.

Other filmmakers have repurposed this theme. In Space Cruiser Yamato (also known as Star Blazers), an old Japanese warship is rebuilt into a powerful spaceship and sent off to save a planet Earth succumbing to radiation poisoning.

In essence, what we have seen is that the atomic bomb indeed affected Japan to the point that the works of Tezuka and later artists inspired by him reflect on the bomb’s effects on families, society and the national psyche. Much like the cycle of life, or the immortal Phoenix in Tezuka’s case, Japan was able to reinvent itself and come back strong as a powerful world player capable of starting anew, but with the idea that mankind must learn from its mistakes and avoid repeating history.