An exclusive first look at how rigs that mimic the stealthy F-35 communicate with other aircraft sims. 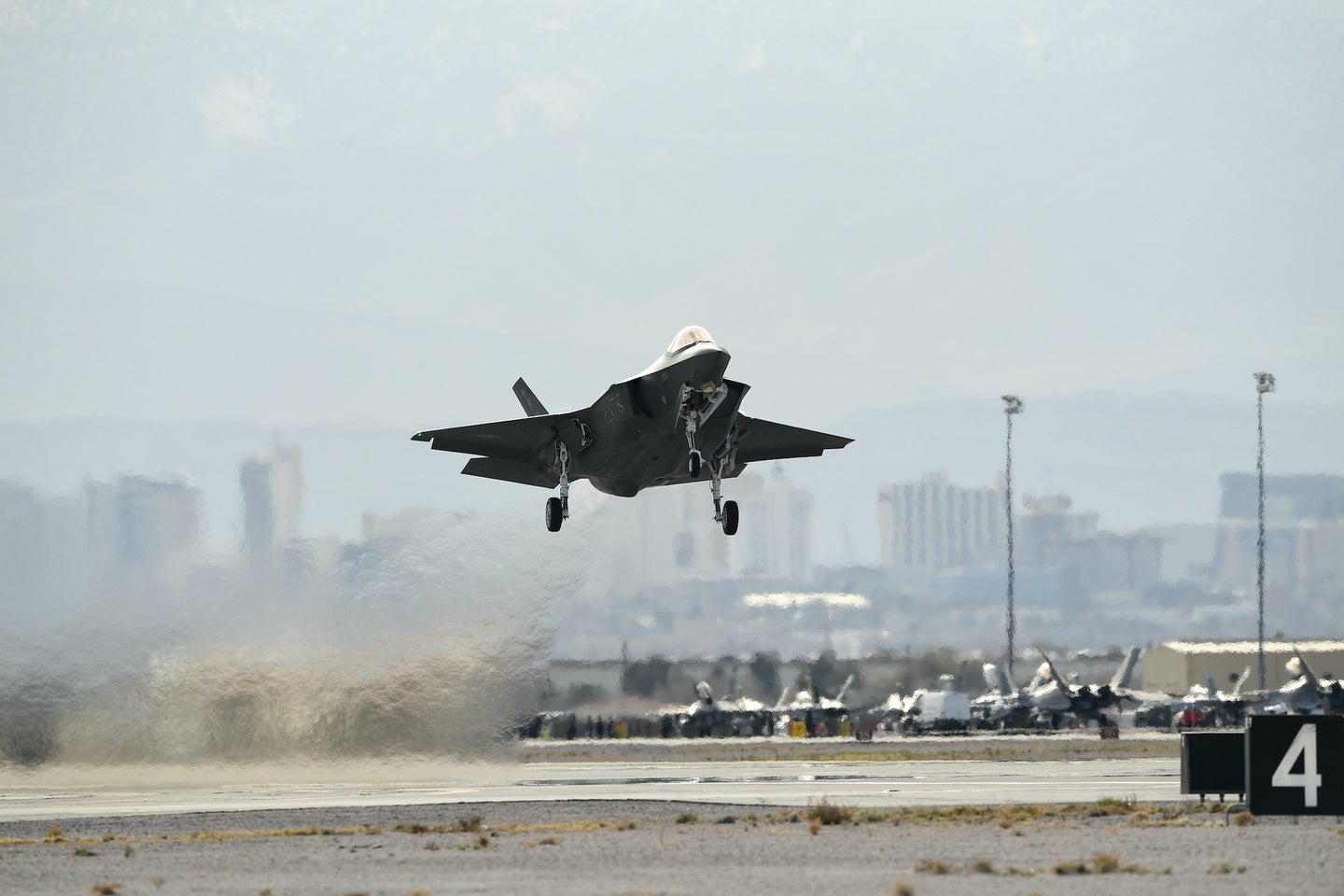 Pilots sometimes train in simulators—machines on the ground that do their best to mimic the experience of operating an aircraft in the sky. This month, the simulators that give F-35 pilots the chance to practice down on terra firma at Nellis Air Force Base in Nevada received an update that allows them to link with a number of other Air Force simulators in real time. Thanks to the new uplink, a pilot in a sim at Nellis can fly their F-35 alongside a virtual F-16 operated by another aviator in a simulator in, say, Asia.

That may sound like basic video game stuff—the equivalent of playing Call of Duty or Fortnite against a friend in another location—but before this month, that capability didn’t exist for F-35 simulators. Previously, the four rigs at Nellis could mimic a four-ship exercise in a virtual flight with each other—like playing Mario Kart with a person sitting next to you—but now they’re capable of flying, in real time, with other simulators for other aircraft in far-flung places.

These F-35 sims can now connect with a variety of other aircraft simulators, most of them for other fighter jets: F-22s, F-16s, and F-15s. So, a pilot in an F-16 simulator in Europe, or an F-22 in the U.S., could digitally fly with one of the F-35 sims in Nevada. The system also works with the Boeing E-3, which is an AWAC, or airborne warning and control system plane.

Getting the F-35s onto the bigger Matrix-like web required building a “complex translator that allows for us to take the way the F-35 communicates and to put it out on a distributed network that can then flow to the other platforms,” says Chauncey McIntosh, vice president for F-35 training and logistics at Lockheed Martin, which makes the stealth jet, also known as the Joint Strike Fighter, or Lightning II. In this case, the simulated jets had to join a pre-existing Air Force system called the Distributed Mission Operations Network, or DMON.

McIntosh also notes that they had to bridge systems that simulate aircraft made by different manufacturers—for example, F-15s and E-3s are Boeing aircraft, while F-35s, F-16s, and F-22s are Lockheed. And the overall DMON system at the Air Force is run by Northrop Grumman, which makes the B-2 Spirit and forthcoming B-21 bombers.

The platform also needed to simulate a “fair fight,” McIntosh says. In other words, the aviators in different simulators “need to feel like it’s going to be that way in the real world.” Lockheed also had to think about how they depicted virtual weather, like rain, in the digital environments that bring various aircraft types together. Ultimately, the goal is for the training to be as similar as possible to real multi-aircraft missions in the actual world. These Nellis simulators, which run on the same code that the F-35 planes do, aren’t the type that physically move to mimic an aircraft’s motion: Instead, a pilot sits in a domed environment that displays high-def images around them.

Lockheed Martin says that uplink of the four simulators at Nellis will be followed by simulator updates at two bases in California: Naval Air Station Lemoore, this fall, and at Marine Corps Naval Air Station Miramar, in the spring of 2021.

The Air Force, the Marines, and the Navy and all fly F-35s, and three different variants exist. It’s a tremendously expensive jet that will cost some $79 million apiece in 2021 for the Air Force model—the least expensive. And, it’s a high-tech flying machine that’s had a troublesome history. “It turns out when you combine the requirements of the three services, what you end up with is the F-35, which is an aircraft that is in many ways suboptimal for what each of the services really want,” Todd Harrison, of the Center for Strategic and International Studies, told The New York Times Magazine in a 2019 feature covering the jet’s turbulent past.

It’s a one-seat fighter jet, but airplane-makers like Boeing and Kratos have even been working on totally uncrewed fighter jets that could complement airplanes flown by people, like the way a wingman does. Because these planes would have no one board and would cost less to make, they’d be the type of craft that an air force would feel more comfortable losing in combat than a traditional crewed one.