When you absolutely, definitely, need an option that isn't killing someone. 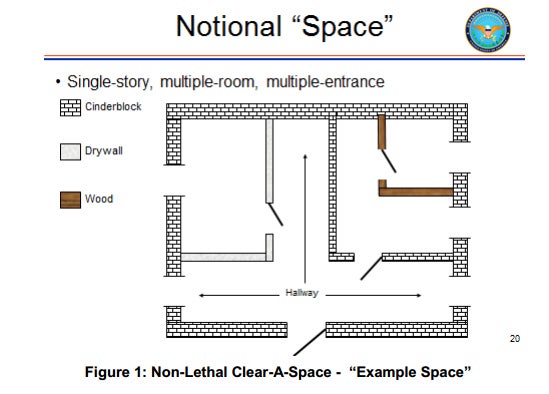 The Office of Naval Research works to make sure sailors, admirals, and Marine commandants of the future have as many tools available for winning the wars of the future. At times, this translates into more accurate or more powerful killing tools. A recent contract solicitation reveals that ONR is also looking in the other direction: they want weapons that don’t kill, and they want a variety of them. If developed, together these technologies would constitute a range of weapons that could make the next war of counter insurgency a somewhat less bloody affair.

Translated out of Pentagonese it breaks down into a few categories: stuff that destroy weapons and equipment but not human flesh, stuff that stuns or disables humans but doesn’t kill them, and stuff that moves humans out of the way without killing them. None of these techniques sound particularly pleasant. Previously, the Pentagon tested a pain ray, and a willing journalist volunteered to feel its effects:

It’s painful and violent, so it’s not an ideal response to a peaceful protest. But that’s not always the right point of comparison. For marines facing a riot, or a medical evacuation team trying to get through a crowd to injured troops, nonlethal weapons that can clear a crowd are a far, far better option than bullets or explosives.

ONR is also looking for nonlethal weapons that focus on breaking stuff, not bodies. Item two, for example, wants to fry electronics with microwaves, leaving them useless on the battlefield and in need of repair. Directed in war, this could mean shutting down an enemy’s cell phone, wrecking the cameras on a surveillance drone, or stopping a vehicle in its tracks.

Part of the logic driving the development of nonlethal weapons comes from the counterinsurgency experience in Iraq and Afghanistan. The “clear a space” technology listed as item four above is about emptying a room, forcefully, but in a way that doesn’t end with dead bodies. The full solicitation announcement specifically cites the 2004 Battle of Fallujah in Iraq, where American troops went house to house, trying to drive out the armed insurgents who earlier killed American security contractors in the city. It was a bloody battle, and took place in a city where hundreds of thousands of civilians lived. ONR wants to give future troops a tool that can make people leave a house within five minutes, and one that minimizes civilian deaths, if possible.

Nonlethal weapons exist in a weird place. There are all clearly, undeniably weapons, tools used to force people into acting more in a way the military wants. When used by police officers domestically in the United States, these weapons fall under a “use of force continuum,” which tries to limit injury by making sure the least-harmful technique is used for the specific situation. It doesn’t always work out that way, and nonlethal weapons originally developed for the military are sometimes misused horribly in police hands.