Downing a drone: Systems work together to fend off attacks

As drone threats and technologies to counter them evolve in the coming years, so will the defenses that protect against them. 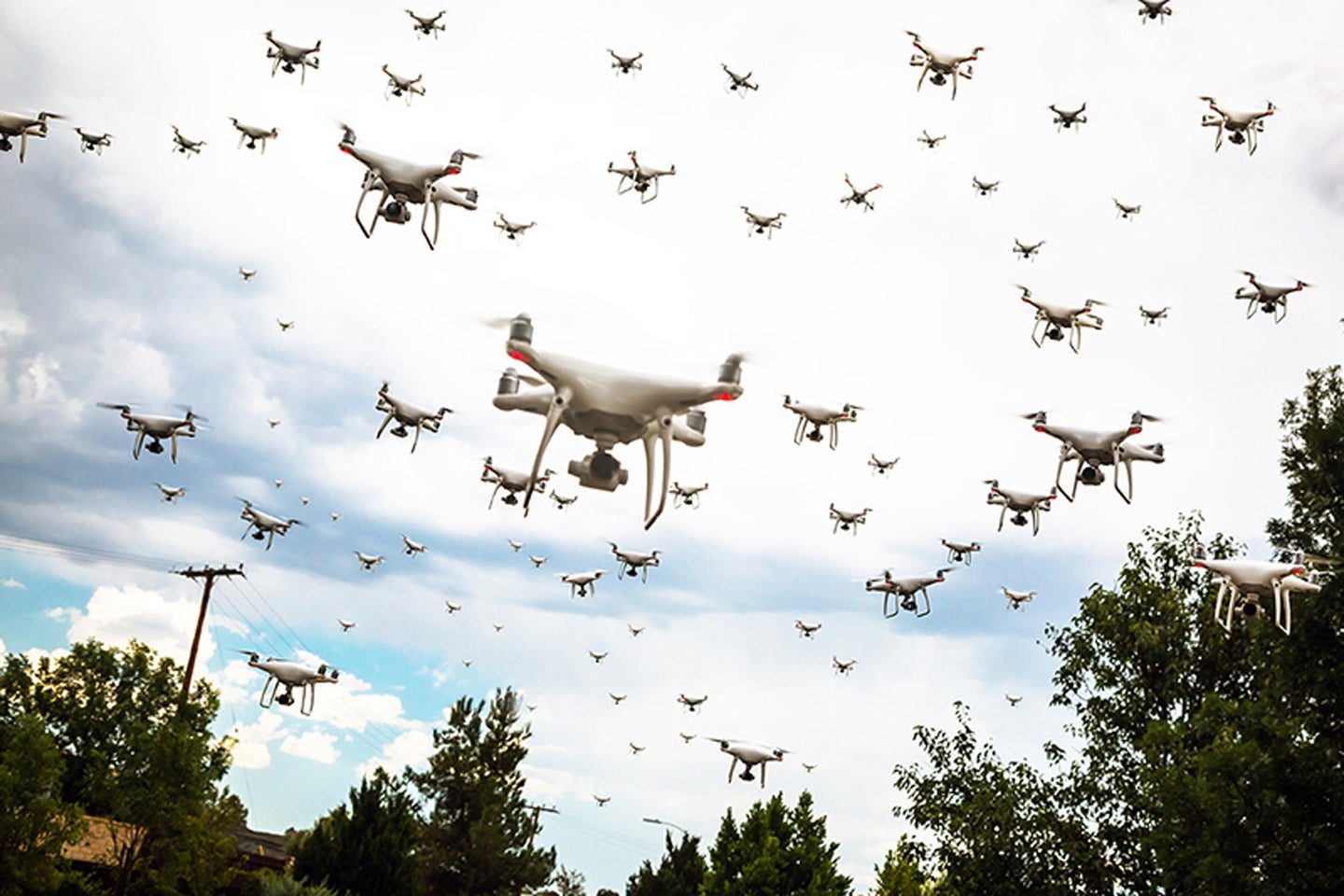 How do you deal with something small that moves 160 mph, 400 feet above the ground? Something small that flies low, slow, and could be launched from anywhere? How do we defeat something with an unpredictable flight path that could take a sudden turn at any moment? And how do you plan for adversarial technology that’s readily available and constantly changing?

The Pentagon, Department of Justice and Department of Homeland Security frequently ask themselves these questions, as drones become more prevalent and sophisticated. From airports and oil refineries to landmarks, government buildings and military bases around the world, drone threats are a problem that is literally flying right above our heads.

According to a 2019 study published by the Center for the Study of the Drone at Bard College, more than 95 countries have access to such drone technology, and that has government officials concerned.

“Drones are one of the most challenging issues in airspace; they’re cheap and easy to get from a store,” said Evan Hunt, director of High Energy Lasers and Counter-Unmanned Aerial Systems at Raytheon Intelligence & Space, a Raytheon Technologies business. “With advanced sensors and strike capabilities integrated into them, they become not just a nuisance, but a real threat.”

In January, Undersecretary of Defense for Acquisition and Sustainment Ellen Lord announced the Defense Department’s plans to identify three to five counter-UAS technologies that could work together, as a system, to defend against drone threats.

Raytheon Technologies builds modern counter-UAS systems that can detect incoming airborne threats, discern what they are with extreme precision, and use lasers and microwave energy to bring them down.

“You have to be able to see that something is coming, identify what it is and quickly take it down with the right effector. The challenge of counter-UAS is pulling together a system that works in concert in mere seconds. These systems follow the steps of what is called the counter-UAS kill-chain,” said Hunt.

The counter-UAS kill chain, a term coined by the Defense Department, is the sequential process to detect, track, identify and defeat threats. It combines sensors, command and control and effectors to take down drones in mere seconds. The first step of this coordinated dance starts with the look-out sensors.

“We have proven air defense radars that watch the skies at far distances, but we’ve also added a new layer of sight.,” Hunt said. “As drones close in or are launched at short range, we use sensors that operate on the Ku-Band of the radio frequency spectrum to identify threats with incredible precision.”

The company’s counter-UAS KuRFS radar, deployed after only 19 months of development, detects an approaching drone swarm and then singles out individual drones. Next, system operators can point directed energy, like a laser, at each drone and burn them down.

High-energy lasers are precise, and with an adequate power source, they have a virtually unlimited supply of ammunition. This makes lasers a cost-effective solution to deal with swarms of relatively inexpensive drones.

High-power microwave systems are similarly effective, but work differently. Rather than pinpoint a weak spot and burn a hole, they send out a pulse that disrupts drones’ control mechanisms and brings them crashing to the ground. They’re effective at downing multiple targets in close formation.

Another way directed energy is revolutionary is it negates the unpredictable flight paths of drones. An energy beam that travels at the speed of light can reach a drone fast, even if it changes course.

The key to the drone kill-chain, according to Hunt, is to avoid relying on just one system. Different drone threats—whether a single drone or a swarm, armed or unarmed, big or small, part of a coordinated attack or a curious pilot—require different approaches to counter them.

“There is not one system that can do it all. To be ready for drone threats facing us today, we need adaptable, enduring systems that can deploy networked eyes with a variety of ways to engage what sensors are seeing,” Hunt said. “Beyond this, there needs to be layers of defense—proven air defense systems designed to engage the more menacing militarized threats at the outer layers into the layers that require extremely precise sensors and non-kinetic effects.”

Dealing with the ever-growing number of autonomous, flying threats may look like sophisticated, with different types of specialized systems stepping in and, in a manner of minutes, doing their part. As drone threats and technologies to counter them evolve in the coming years, so will the defenses that protect against them.