Inside the race to develop a safe COVID-19 vaccine

There’s no guarantee a vaccine is right around the corner, but more than 145 candidates are under investigation. 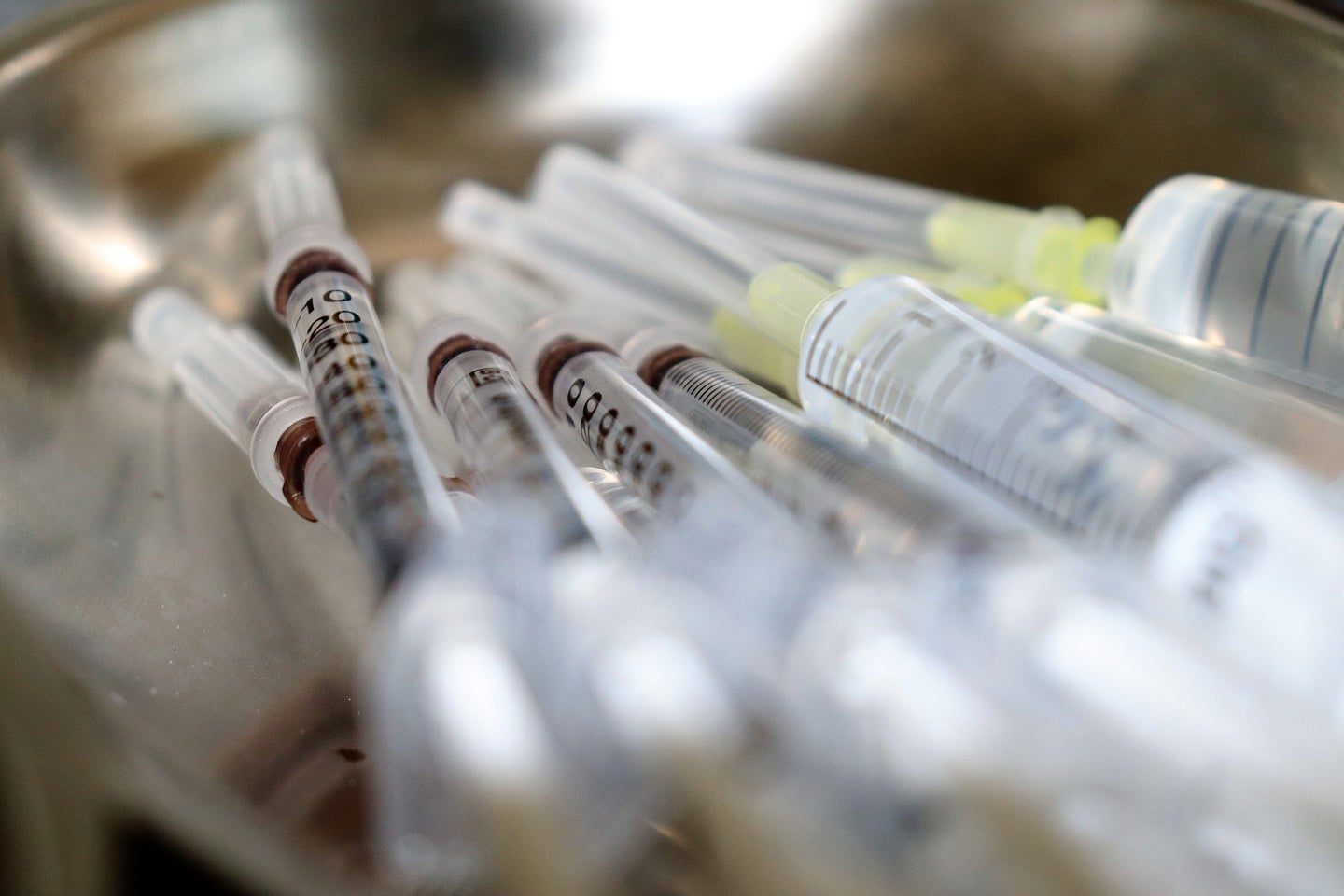 Researchers are working at unprecedented rates to create a COVID-19 vaccine. Pixabay
SHARE

As COVID-19 cases continue to surge in the United States and abroad, researchers are racing to develop a vaccine at record-breaking speeds. In a June 23 hearing before the House Energy and Commerce Committee, Anthony Fauci, the director of the National Institute of Allergy and Infectious Diseases, reiterated that he is “cautiously optimistic” about the possibility of a coronavirus vaccine being ready by early 2021.

“The development of a vaccine for a new pathogen typically takes many years and sometimes decades,” says Dan Barouch, the director of the Center for Virology and Vaccine Research at the Beth Israel Deaconess Medical Center in Boston. “The attempt to develop COVID-19 vaccines in a year is truly unprecedented in the history of vaccinology.”

To date, more than 145 vaccine candidates for COVID-19 are currently under development in laboratories around the world. Barouch and his colleagues are working on a COVID-19 vaccine candidate with the New Jersey-based company Johnson & Johnson, which will begin the first of several stages of human trials later this month. A number of other vaccine candidates have already entered human testing, including ones developed by researchers at Oxford University and the biotechnology company Moderna Therapeutics in Massachusetts.

Before any vaccine can be approved by the Food and Drug Administration, though, its creators must demonstrate that it is both safe and actually protects people from the intended disease—and many potential vaccines fail somewhere along the way. Here’s how researchers are hoping to streamline this complex, expensive process.

“The goal for COVID-19 vaccine development is to move the vaccine programs forward as fast as possible so long as safety and scientific integrity are not compromised,” Barouch says. “What is not acceptable is any sort of cutting corners that would result in patient safety risks, because safety is the most important part of any vaccine, including a COVID-19 vaccine, even during a pandemic”

A new vaccine candidate must first be tested in animals before undergoing three phases of clinical trials in people. These tests investigate whether the potential vaccine could have any harmful side effects, what dose is needed, what kind of immune response it causes, and how effective it is in large numbers of people. Then, after a vaccine has been licensed, researchers will continue to monitor it to see how well it performs in the general population and to make sure there aren’t any extremely rare reactions that weren’t seen until many more doses had been given, says Bruce Gellin, the president of global immunization at the Sabin Vaccine Institute in Washington, D.C.

“We do this with vaccines all the time; even after they’re licensed, even if they’re recommended, there are systems in place that continue to look at both the safety and effectiveness,” he says. “But [it’s] a good sign if it takes a while for a rare adverse event to show up; that means it’s truly rare.”

One hypothetical concern that can arise during this process is that, if a vaccine contains ingredients that resemble molecules found in our bodies, it could trigger an autoimmune reaction, says Patricia Winokur, the executive dean of the University of Iowa Carver College of Medicine in Iowa City. For example, the drug manufacturer GlaxoSmithKline discontinued its FDA-approved vaccine for Lyme disease due to rare reports in the early 2000s of the vaccine supposedly triggering arthritis. To date, researchers have found no evidence that this was actually happening to people who had received the vaccine.

Today, researchers have sequenced the human genome, as well as that of the coronavirus that causes COVID-19, officially known as SARS-CoV-2. “We can see whether there is anything in those proteins that is similar to anything in the human body,” Winokur says. “That helps us make pretty scientific estimates that this vaccine would be safe over the long haul.”

Additionally, the kinds of vaccine candidates that might cause this type of problem tend to include adjuvants—ingredients intended to help the vaccine provoke a more powerful immune response to the virus. While many approved vaccines include adjuvants, verifying their safety adds additional time to the development process. “But the early [COVID-19] vaccines that seem to be on the fast track do not have adjuvants, so you have removed even that concern,” Winokur says.

Scientists will also be on the lookout for the possibility that a COVID-19 vaccine candidate could, in very rare instances, create an immune response that actually worsens the severity of the disease if the person is later exposed to the real virus. Scientists worried that this may have occurred in previous animal studies of experimental vaccines against SARS (another coronavirus). “That’s the scenario that we would need to be watching very carefully in these rapid vaccine studies,” Winokur says. So far, monkeys that received vaccines developed by the Oxford team and the Beijing-based company Sinovac Biotech (which includes an inactivated version of SARS-CoV-2) have not developed exacerbated disease after being exposed to the virus.

There are many different kinds of vaccine candidates for COVID-19 under development. One strategy that may allow researchers to develop a COVID-19 vaccine particularly swiftly is using pieces of DNA or RNA that code for the spike-shaped protein on the surface of the virus. This protein helps the virus latch onto and infect human cells and seems to be the component that our immune systems react most strongly against. These bits of genetic material prompt our own cells to build copies of the spike protein, which cannot cause disease on its own but can train the immune system to recognize the real virus in the future.

Because DNA and RNA vaccines only include fragments of genetic material, they can potentially be developed and evaluated for safety more quickly than traditional vaccines for which a weakened or inactivated form of the virus must be grown. That said, researchers still have to determine how effective this new kind of vaccine will be; no vaccines based on this technology have been licensed yet.

Although COVID-19 is a new disease, researchers have also had a head start on developing vaccine candidates because of previous work on vaccines for other coronaviruses such as the ones that cause SARS and Middle East respiratory syndrome (MERS). The vaccine candidate created by Oxford University researchers was able to move into human trials rapidly because the team had used a similar technique to develop a vaccine candidate for MERS and had already shown that it was safe in people.

Certain characteristics of the novel virus may also bode well for our chances of developing a vaccine quickly. Viruses are often less complicated than bacteria or parasites like the one that causes malaria, Winokur says. This makes it easier for scientists to figure out which parts of the virus are likely to be the components that cause the body to mount an immune response and create antibodies that will protect us from future infections. Preliminary research also hints that the body may create a robust immune response after being exposed to the novel coronavirus or its protein pieces, which could give vaccine makers a blueprint for designing an effective preventative drug.

Still, scientists have not yet determined what an immune response that would successfully protect a person from COVID-19 looks like, Winokur says. Because of this, demonstrating that a COVID-19 vaccine candidate can actually prevent infection could be a challenge. “That will be harder to evaluate in a rapidly developed vaccine,” she says.

To find out whether a vaccine candidate is effective, researchers must inoculate a large number of people and then wait and see whether fewer of them catch COVID-19 than people who received a placebo. “The more disease that is [out] there, the quicker you can assess how well a vaccine performs,” Gellin says. By its nature, a pandemic will provide many potential opportunities for participants in these trials to be exposed to the virus. “There is so much virus out there [that] you’d probably be able to determine that relatively quickly.”

There are also ways to compress the time needed to move a vaccine candidate through clinical trials. Because COVID-19 poses such a dire threat to public health, scientists are planning large clinical trials that can launch as soon as the results from smaller, earlier-stage trials for a vaccine candidate arrive, Barouch says. Normally, researchers would have to wait until these early studies had concluded before they could even begin to contemplate designing their next round of testing.

“There is no additional risk to patient safety because the larger study doesn’t start until data exists from the smaller study, but the time lag between finishing a phase I/II study and starting a phase III study could be on the order of days as opposed to years,” Barouch says.

The process of producing vaccines on a large scale can be sped up as well in response to the pandemic. “Many companies are starting to mass produce vaccines even now as we speak, before they have any indication that it’s actually effective,” Barouch says. “By willingness to take [that] financial risk, companies can accelerate the process at a speed that has never been done before.”

Even though researchers are working at breakneck speed to design and evaluate candidates for a COVID-19 vaccine, their efforts may not bear immediate fruit. “It is theoretically possible that a vaccine could be available for emergency use authorization by this winter, but that is in no way guaranteed,” Barouch says. “That will require many things all happening well the first time around, and as we know from science and medicine not everything works out the first time around.”

And even if a vaccine for COVID-19 becomes available in record time, it’s unlikely there will be enough doses to meet the enormous worldwide demand for it immediately. Ultimately, we will probably need a widely-available vaccine to bring the COVID-19 pandemic to an end. But while we wait for that vaccine to materialize, we can at least use measures like wearing masks and social distancing whenever possible to prevent COVID-19 transmission.

“With a vaccine, you want to have people protected as quickly as possible,” Gellin says. “But should they have to wait, there are still ways that they can protect themselves.”