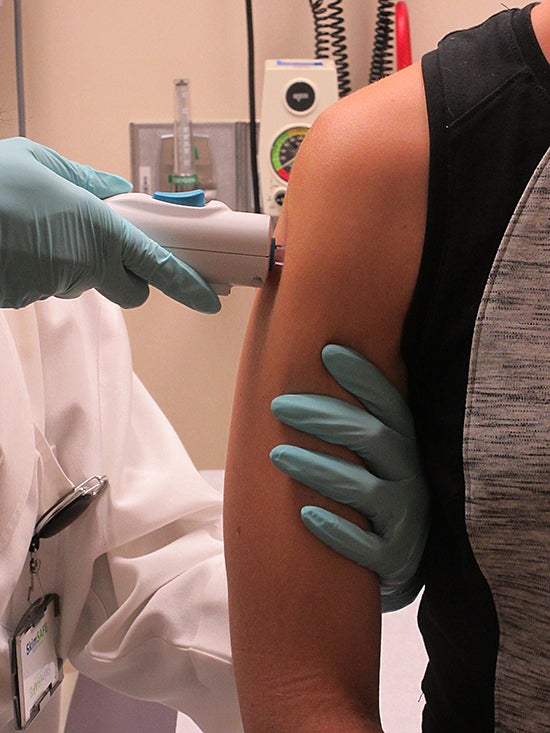 A healthy volunteer receives the NIAID Zika virus investigational DNA vaccine as part of an early-stage trial to test the vaccine's safety and immunogenicity. This is the first administration of this vaccine in a human.
SHARE

The Zika virus which has run rampant throughout South America has just recently popped up in a small outbreak in Florida, where cases of the virus were confirmed to have come from local mosquitoes. While it’s not likely to turn into a full-blown attack, the disease continues to infect many parts of the world, and researchers and doctors have been scrambling to find a vaccine to take on the virus. Publishing today in the journal Science, researchers report the success of three different types of vaccines during a study evaluating their efficacies in rhesus monkeys. While the vaccines haven’t been tried in humans yet, researchers write that this is a step forward toward providing an effective vaccine for humans.

Researchers first started researching a vaccine shortly after the initial outbreak in Brazil, in May of last year. Vaccines typically take years, if not decades to create, and some viruses prove particularly difficult to work with. The Zika virus, which is part of a group of viruses called flaviviruses, though, seems to be relatively straightforward.

In this study, researchers studied three different vaccines: one that manipulated a whole, dead Zika virus called PIV or purified inactive virus, another that took essential DNA from Zika and placed it in a plasmid, and a third that placed Zika genes into adenoviruses, which help to cause an immune response in infected cells. In each of the three trials, they first infected 16 rhesus monkeys with the Zika vaccine and then administered the virus; as a control they did the same for 12 unvaccinated monkeys.

The researchers found that all three methods were successful, completely protecting the animals against the virus. Importantly, the authors wrote, it showed that even very low levels of antibodies (produced in response to the vaccines) were effective enough to protect the monkeys from being infected with Zika. In comparison to other viruses, this shows that the Zika virus seems to potentially be relatively easy to vaccinate against.

While this study does not show what effect the vaccine could have on humans, it does provide clues as to what vaccine will be most effective. While all three vaccines worked, when the researchers compared the responses of the rhesus monkeys to the responses of mice in previous studies, they found that the PIV vaccine was more potent than the DNA-based vaccine.

However, the researchers note, that one thing missing from these initial studies is the effect other flavivirus infections could have on the effectiveness of the Zika vaccine. Specifically, dengue, a flavivirus which also runs rampant in current Zika-stricken areas. Researchers plan to study these coinfection effects in trials in the near future.

For now, the successful results of this study are good news for people in Zika-stricken areas as it provides evidence that an effective vaccine could be available in the near future, not just for this particular outbreak, but any further ones that could also come. Just this past week, the NIH began testing its Zika vaccine in 80 healthy adults and late July, Inovio pharmaceuticals began its first human trials of its Zika vaccine, which is a DNA-based one, in 40 healthy individuals. If they prove successful, larger trials could begin in areas where Zika outbreaks are prominent.