Measles faces many more obstacles than the smallpox eradication effort did. 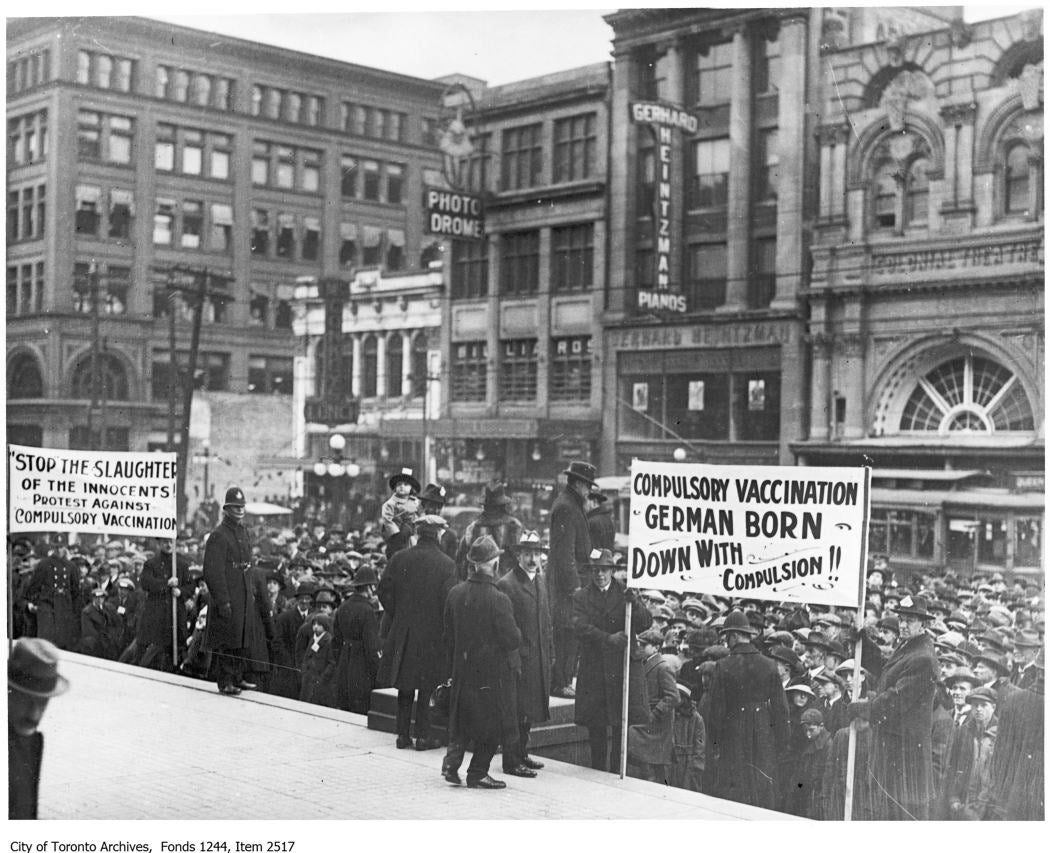 Edward Jenner was a criminal—at least according to his critics. Charles Creighton, a highly regarded physician and author, said he was a money-grabber and a crook. Alfred Russel Wallace, who theorized natural selection at the same time as Darwin, questioned his motives and practically declared him a fraud. Jenner’s crime? Inventing the smallpox vaccine.

Jenner’s original creation, which he developed in 1796, was far from perfect—side effect rates were high, and rather than an injection, it involved transferring infected skin from one person to the next—but immediately, it drove death rates down. In the 1760s, smallpox accounted for more than 10 percent of all deaths in London. By the 1820s, just two decades after Jenner’s vaccine became widely available, it accounted for less than four. Rates were even lower by the time Britain made smallpox inoculation mandatory in 1853, which meant that circumstances were ripe for a pushback of the same kind we’re experiencing today.

“We judge the mathematical probability of events based on how easily we can recall an instance of it,” says Saad Omer, an epidemiologist and vaccinologist at Emory University who regularly serves on national and international advisory boards for vaccine preventable diseases. Plane crashes get much more attention than do automobile crashes, he explains, so people fear air travel more despite cars killing thousands more people annually.

“As you decrease incidence of disease, you have increasing cohorts of parents who don’t hear about the disease as much as they hear about vaccine adverse events, real or perceived, and when that happens you have a drop of confidence,” he says. Many other factors influence whether someone will refuse a vaccine—trust in the government, misinformation, truth in healthcare, and so on—but this lack of exposure to the real risks of infectious diseases matters a lot. It’s what he and other researchers argue is a central factor in when anti-vaccination movements arise.

It only took a few decades of lower smallpox incidence for a vocal minority to start pushing back against the vaccination campaigns of the 19th century, but they eventually died away and gave room for the 20th century eradication effort that eventually wiped the disease out entirely in 1980. Smallpox itself may have been helpful there. The disease’s vector, the variola virus, was extremely infectious and generally devastating, killing about 30 percent of its victims and leaving the survivors permanently marked by telltale pockmark scars. It was terrifying in a very visible way—and that united people against it. That meant that widespread vaccination was relatively easy to get on board with, and incidence plummeted as a result. Smallpox was endemic to 59 countries in 1959. By 1967 it was down to 31, and by 1973 just five saw cases of the infection. The last case came four years later, and the WHO declared the disease eradicated three years after that.

Omer and colleagues argued in a 2013 paper that this short tail—where cases drop off rapidly—was so tiny that a substantial anti-vax movement never had time to materialize after that original opposition faded away.

“Smallpox has many of the characteristics that made it eradicable,” says Katrina Kretsinger, an immunization expert at the WHO. “Measles and polio have different kinds of challenges.”

Measles hasn’t been high on the list of concerns for most parents for many decades now, at least in developed countries, and even though it can be deadly, most people recover from the virus with few long-term repercussions. That’s shifted parental anxiety from the disease itself to the vaccine. One paper on vaccine hesitancy from 2015 notes that “the inability of parents to control the risks of adverse reactions, the man-made nature of vaccines, and the unpredictability of adverse reactions, which are dreaded and seemingly exotic, result in parents perceiving the risks of vaccines to be greater than they actually are.”

“Largely in the developed world, and somewhat in the developing world as well, some of the vaccine preventable diseases aren’t as visible, so people don’t seek the vaccine,” Kretsinger says. But where measles was a killer in recent years, she says that fear still exists—and it prompts people to get vaccinated.

These recent flare ups have prompted an uptick in coverage and awareness of measles, but Omer says it may have been so long that we’ve been living with these low incidence rates that people’s attitudes may be too hardened We’ll have to work harder to combat the anti-vaccination sentiments now that we’re so far along the long tail of measles eradication. And these current outbreaks should prompt us. Omer says while he’s not despondent about measles now, we’re approaching a point where we should be concerned. We’ve maintained elimination in the U.S. for nearly two decades now, but he explains that “it’s not an all or none phenomenon when the herd immunity has been breached.” We won’t just wake up one day and realize we’ve crossed over to endemic measles again. “What you’ll start seeing is more and larger outbreaks,” Omer says, “which is what we’re seeing right now.”