A Day In The Life Of Patrick Hardison, Face Transplant Survivor

After a firefighting accident left him disfigured, Hardison got a new face 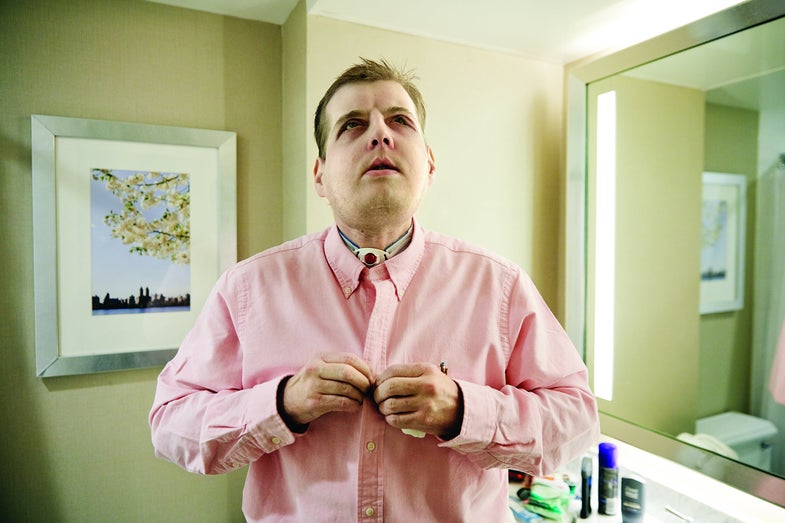 On September 5, 2001, a two-alarm blaze at a mobile home outside of Senatobia, Mississippi, drew dozens of firefighters to the scene. Patrick Hardison, a local tire salesman, was among them.

When the home’s roof gave way and the ceiling crashed down, Hardison was the only one still in the trailer. His respirator mask melted onto his face. His lips, ears, eyelids, and much of the skin on his head were burned off.

Fourteen years and 71 surgeries later, Hardison remained grossly disfigured. Then he met Dr. Eduardo Rodriguez, chair of plastic surgery at NYU Langone Medical Center. He suggested a daring idea: to remove Hardison’s face and attach another. In August 2015, a suitable donor was found—David Rodebaugh, a bicycle mechanic who had been in a fatal accident. He had a matching blood type and compatible genes.

After a 26-hour surgical procedure, Hardison emerged with a new face. This spring, Popular Science tagged along with him during a follow-up visit to Dr. Rodriguez to see what life is like in someone else’s skin.

Back To Daily Life

Hardison’s transplant surgery was the most extensive of the dozens attempted worldwide during the past decade. Nearly a year after his transplant, Hardison is still on a diet of immunosuppressant drugs to stop his body from rejecting the new face. He has yet to suffer a rejection—a first in this pioneering field.

My face still has a tingling ache and pain. When I shower in the morning, I let hot water run over it, which helps some. After the surgery, I was taking 15 pills at 8 a.m., and another 15 at 8 p.m. Now I take six in the morning, and only four at night. The medication can make me feel woozy, but the times it doesn’t are a thousand times better than the times is does. I am also sleeping more. I still get up at 5:30 or 6, but now I sleep three or four hours without waking up.

People stopped staring at me right after the surgery. I went to Macy’s and did some shopping the day I got out of the hospital, and I realized people weren’t looking at me anymore—even though my face was swollen, they just thought I had jaw surgery. They didn’t look at me and think, “He had a face transplant.” It was a great feeling. When I first looked at myself in the mirror, I realized right away that this was my face. There was no taking it off.

Before the surgery, I had two little pinholes that I could see out of. My eye doctor told me I was like a horse with blinders on—I could see only straight in front of me. I was 20/2200 in vision. I am now about 20/30. I don’t have trouble reading the cellphone screen anymore, but I am so used to holding my phone close to my face. Whenever I pick it up now, it goes there automatically.

My surgeon, Dr. Rodriguez, wants to make sure nothing is out of place. I’ve had six or seven touch-ups since the transplant, and I met with him to discuss another, which will raise my forehead and eyebrows. They were too low. There will always be some more stuff they’ll have to straighten out—I still have to come to NYU once a month to do lab work and also see my psychologist—but this next surgery should get me settled for at least the rest of the year.

People label me “disabled.” I hate that. It’s been less than a year since the surgery, and I am way ahead of schedule. I opened my eyes 10 days after the transplant, which everyone thought would take me six months to do. I didn’t want to become a hermit following the procedure—I just want to get back to living my life. I am taking my kids to Disney World this summer, and since Dr. Rodriguez scheduled the removal of my trachea tube, I am finally going to be able to jump in the water. I haven’t done that since the accident.

This article was originally published in the July/August 2016 issue of Popular Science, under the title “Trading Faces.”