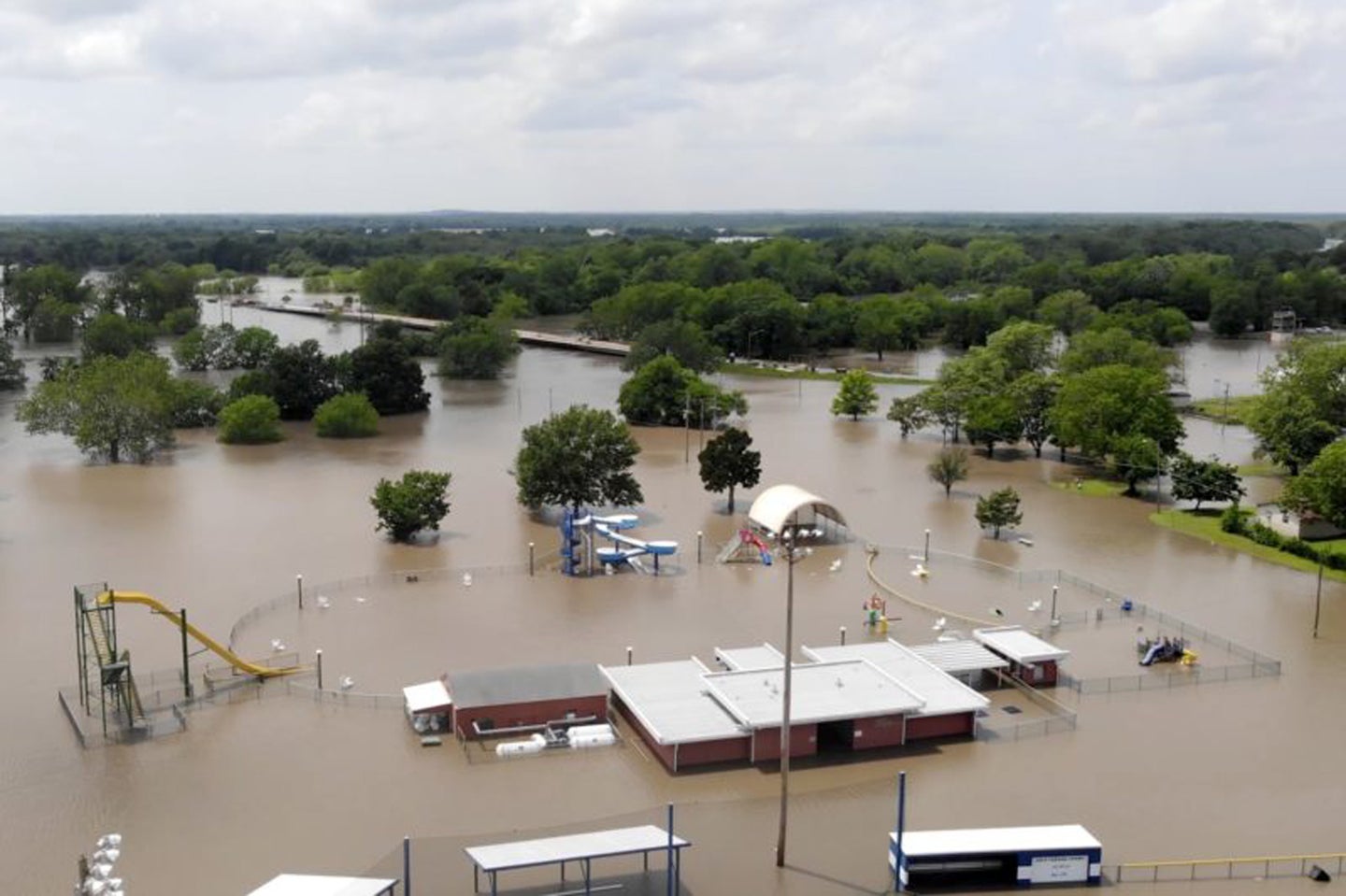 Miami, Oklahoma, is caught in a vice, being squeezed from both sides. To the north, dust from abandoned lead mines is seeping into the ground and into waterways. To the south, homeowners on Grand Lake o’ the Cherokees are pushing to raise the lake level. But doing so would worsen the already devastating floods upstream, in Miami, bringing lead-tainted waters to more doorsteps in and around town.

“When you have flooding, that lake backs up and it carries that contaminated water into people’s homes, people’s yards and streets,” says Steve Emerman, a retired professor of earth science at Utah Valley University who is studying lead contamination in the region.

Miami—pronounced My-AM-uh by locals—is a microcosm of the larger fight over climate change and pollution, where battle lines are drawn according to the combatants’ wealth, power and influence. In Miami and the surrounding tribal lands, residents are short on money and political power. But on Grand Lake, which is wreathed by cushy vacation homes, wealthy residents have found a powerful ally in Senator James Inhofe (R-OK).

Inhofe, who owns a house on Grand Lake, has a long record of dismissing environmental issues—he once brought a snowball to the Senate floor in February in an attempt to discredit climate science. Inhofe and his neighbors want to raise the water level on Grand Lake by two feet in the late summer to make it easier to navigate by boat.

The lake was formed in 1940 by the Pensacola Dam, which is overseen by the Federal Energy Regulatory Commission (FERC) and the Army Corps of Engineers. Last year, Inhofe made it easier to raise the lake level by adding an amendment to the 2020 National Defense Authorization Act that would prevent FERC from considering the impact that higher water levels would have on flooding upstream, including on tribal lands, as it considers whether to relicense the Pensacola Dam. This cleared the way for the Army Corps of Engineers to raise the lake level.

Inhofe’s office did not respond to a request for comment. Previously, he has said that raising the water level would “make the lake a better place for recreation and commerce,” and his office has said that higher water levels won’t impact flooding upstream from the lake, since Miami and tribal lands are at a higher elevation.

Locals, however, say that every time the lake level rises, floods grow more severe. A graduate thesis from the University of Oklahoma, found that raising the water level on Grand Lake would raise water levels upstream in Miami—only a few inches, but even a small increase can extend the reach of floods.

Miami leaders have decried Inhofe’s amendment as “unfair” and an example of “power play politics.” And a local environmental group, the LEAD Agency, is continuing to advocate against higher water levels and is considering legal action on the matter.

“Regulators have been doing backflips to avoid confirming what is quite well known, which is that when levels rise and when flooding happens, it’s a new Superfund event each and every time,” says Travis Stills, an attorney with Energy and Conservation Law in Durango, Colorado and legal advisor to the LEAD Agency.

For the first half of the 20th century, companies excavated lead and zinc from mines in the region and left behind huge mounds of limestone and other rocks laced with heavy metals. Those metals eventually leaked into Tar Creek, just north of Miami, and into the soil, posing an ongoing threat to children who live nearby.

“If you have a yard contaminated with lead, you have a lot of issues,” Emerman says. “You can have children playing in the dirt, eating the dirt, or the wind blows up dust and it can flow through the house. There are a lot of pathways for lead to get into a child.”

Lead creates dead zones in the brain, Emerman says, and it can cause profound developmental issues in children—stunted growth, learning difficulties, anxiety, depression and aggression. In 1983, a 40 square-mile area around Tar Creek was declared an EPA Superfund site, but progress on a cleanup was slow. Ten years later, a third of native children in the Tar Creek area still tested for high levels of lead in their blood.

In the decade that followed, the state of Oklahoma undertook a vast cleanup effort and a controversial plan to pay residents to relocate from contaminated land—Inhofe secured tens of millions of dollars in federal funds for this work. But many homeowners were underpaid for their homes, and lead contamination persisted. Last year, the EPA put forward its latest cleanup plan for Tar Creek, which remains tainted almost 40 years after being declared a Superfund site.

“Tar Creek is one of those examples of a very difficult problem that federal agencies simply don’t have the political will—and, to be fair, the financial capacity—to really dig in and go after like the law requires,” Stills says.

One challenge to the cleanup is that no one is entirely sure how much lead is in the soil or how far it is likely to spread. Indian Health Services hired Emerman to collect samples of soil and floodwater to determine how much lead is currently in the ground and how much floodwaters are likely to bring in. Higher water levels on Grand Lake could complicate this calculation.

“If you raise the level of the lake, you’re going to increase the area that will be flooded when you have rain,” Emerman says. “Places that were never flooded will now be flooded occasionally. That means you could have someone with a yard that is now free of lead, and after the next flooding event, they could have lead introduced into their soil.”

“Many people in our community are having to buy flood insurance for the very first time—people who have never, ever been flooded,” says Rebecca Jim, executive director of the LEAD Agency and a member of the Cherokee Nation.

Jim says these issues are particularly egregious for Native American tribes, like the Quapaw, who were forcibly moved to northeast Oklahoma in the 19th century. When mining companies dug up the Quapaw’s new land in Oklahoma, they denied royalties to most Quapaw landowners—even as mines in the region supplied roughly half the lead used by the United States in World War I. Now the Quapaw are coping with the mess that mining companies left behind.

“We want the place cleaned up so that years from now a person can go to their inherited land and build a home and know that they can build a garden,” Jim says. “We want a cleanup that is respectable.”