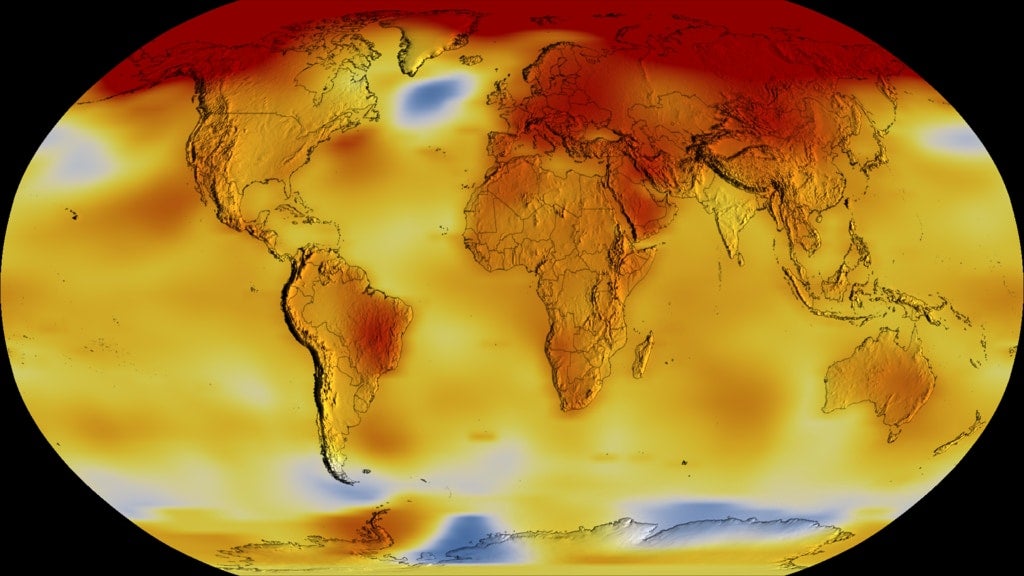 NOAA found that temperatures in 2019 were 1.71 degrees Fahrenheit higher than the 20th Century average.
SHARE

Last year was a scorcher of epic—but not surprising—proportions, according to independent analyses by NASA and the National Oceanic and Atmospheric Administration (NOAA). The agencies reported on January 15 that 2019 was the second warmest year on record, closing out the warmest five-year period and the toastiest decade ever recorded.

“By itself, one year’s global temperature is an interesting note. But put in the context of the warming we’ve seen over the last several decades, it’s kind of an exclamation point at the end of a long run of warming,” says Deke Arndt, chief of the monitoring branch of the National Centers for Environmental Information, which undertook the NOAA analysis.

Both reports drew from largely the same temperature measurements; however, each organization analyzed them a little differently. Notably, the NASA analysis was more aggressive about extrapolating what conditions were like in areas with few weather stations, such as the Arctic. Being able to compare the findings from these two methods is helpful, Arndt says, “especially when they land so close to each other like they did this year.”

The most disturbing aspect of the findings is “how relentless this is; it’s year-in, year-out,” says Gavin Schmidt, director of NASA’s Goddard Institute for Space Studies. According to their reports, the global average temperature in 2019 was 1.8 degrees Fahrenheit higher than those seen in the mid-20th Century. Global average temperatures are now about 2 degrees Fahrenheit above those seen in the late 19th Century, when recordkeeping began.

NOAA found that temperatures in 2019 were 1.71 degrees Fahrenheit higher than the 20th Century average. Additionally, the amount of heat stored in the upper levels of the ocean—which absorbs more than 90 percent of the excess heat trapped in the atmosphere by our greenhouse gas emissions—reached a new record in 2019.

All of this means that we clearly aren’t succeeding in our efforts to prevent the devastating impacts of climate change, Bob Ward, the policy and communications director at the Grantham Research Institute on Climate Change at the London School of Economics, told The Guardian. “We must focus on cutting global emissions to net zero as soon as possible.”

The findings agree with those from other recent analyses. The World Meteorological Organization and the United Kingdom’s Met Office also found that the average temperatures in the past five and ten-year periods were the warmest on record. For now, 2016 continues to hold its spot as the warmest year on record.

The results of the new analyses are also in line with predictions that scientists have been making since the 1970s regarding how our planet would warm in response to increased emissions of carbon dioxide and other greenhouse gases, Schmidt says. “Not only are the data increasingly stark, but unfortunately we predicted this ahead of time,” he notes. “One degree doesn’t sound like a lot, but for the planet it’s a big number.”

The NOAA report also drilled into the extreme conditions that 2019 brought to many parts of the world. Arctic and Antarctic sea ice shrank to the second-smallest amount recorded since 1979 (sea ice grows in the fall and winter and thins out in the spring and summer). Record-high temperatures were seen in parts of central Europe, Asia, southern Africa, New Zealand, Mexico, and eastern South America.

It was a bad year for natural disasters as well. In the first half of 2019, extreme weather events including floods and cyclones displaced a record-breaking 7 million people, according to the International Displacement Monitoring Center. Hurricane Dorian slammed into the Bahamas as a Category 5 hurricane, the strongest ever recorded for the island nation. And Australia endured its hottest and driest year on record, setting the stage for the wildfires that have devastated much of the country since September.

Climate change is increasing the frequency and severity of heat waves, droughts, storms, and flooding. “These extreme events are a natural part of the weather and climate system; the relationship with climate change is really more about long-term influence rather than a driver of specific individual events typically,” Arndt says.

Still, there’s no doubt that 2019 was a year of extremes.

The Met Office has predicted that 2020 will continue Earth’s streak of extreme heat and be amongst the top six warmest years on record.