These adorable sharks have evolved to walk across the seafloor 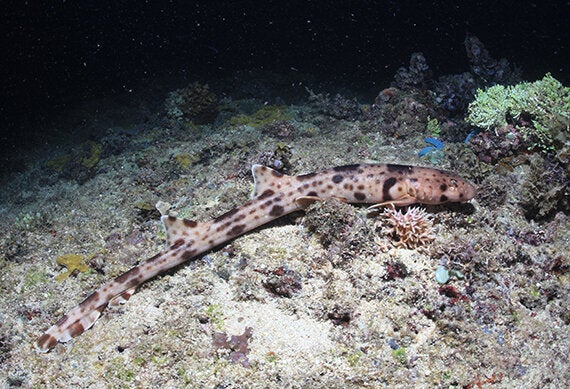 Walking sharks have strong muscular pectoral fins that allow them to take strides along the seafloor.
SHARE

In the waters surrounding Australia, Indonesia, and Papua New Guinea, there lives a very unusual kind of shark. Known as walking sharks, the nine species of the genus Hemiscyllium have the ability to crawl across the seafloor.

“They’ll stand up on their very muscular pectoral fins and they’ll kind of wiggle along and walk instead of swimming,” says Shannon Corrigan, an evolutionary biologist at the Florida Museum of Natural History in Gainesville.

Walking sharks can even tolerate short stints in open air as they scramble between tidal pools in their shallow coral reef habitats during low tide. But they’re also noteworthy for another reason: Walking sharks are one of the newest groups of sharks on the planet, appearing on the animals’ evolutionary tree around 44 million years ago, Corrigan and her colleagues reported January 21 in the journal Marine and Freshwater Research. And they suspect that the group may not be done splintering into new species yet.

The researchers looked at when and how the animals evolved into their own species. They found that their ancestors might have colonized different locations by hitchhiking on roving islands. The team hopes that studying these mysterious little sharks can give conservationists information about how best to protect them and perhaps even lead to broader insights about shark evolution in general.

Corrigan is among a group of collaborators who have spent the past 11 years studying walking sharks, work that has included the discovery of four of the group’s nine species. The first ever species of walking shark was described in 1788 and the most recent in 2013. Some walking sharks range across wide swaths of Australia’s northern coast, while others are confined to very small areas. Their territories don’t overlap, but seem to form a rough ring around northern Australia, the island of New Guinea, and several satellite islands.

The researchers suspected that the walking sharks might have split into different species around this ring. But when they began investigating how these sharks evolved over time, they realized that the shark’s history is probably a lot more complicated. “We found this really weird pattern of relationships between the species,” Corrigan says.

The researchers examined genetic material from tissue samples taken from both live walking sharks as well as museum specimens. From there, they constructed an evolutionary tree for the entire group. In several cases, one kind of walking shark was found far from its next closest relative. Walking sharks aren’t very strong swimmers and cannot cross areas of deep water, so they probably didn’t travel so far on foot (or rather, on fin).

Instead, the explanation for the sharks’ scrambled distribution might align with the geologic history of their home region.

“It’s been extremely geologically complex over relatively recent times, so you have a lot of different plates moving together and colliding, and that’s…constantly creating new habitats for marine species,” Corrigan says. “A lot of that ties in pretty nicely with the patterns we were seeing.”

She and her team think that small groups of walking sharks hitched on small island fragments. As these islands were moved about by plate tectonics, the sharks were carried to a new territory far from their fellows. Eventually, barriers the sharks could travel over, such as channels of deep water, formed between the groups. Over time, the two separated groups of sharks would have evolved into different species.

The easiest way to tell the different kinds of walking sharks apart is by their striking color patterns; the team has noticed variations in these patterns even within the range of a single species. It’s possible that new species are soon to emerge, or already have emerged but haven’t been recognized yet.

“It really is this nice natural experiment of how sharks evolve,” Corrigan says. “We can go sample and study it in the present day because it’s still happening, we think.” This makes walking sharks ideal for studying more ancient events that might have caused other shark species to evolve as well.

Today, the parts of northern Australia, Papua New Guinea, and eastern Indonesia where the sharks live are hotspots for biodiversity, particularly among fishes. But they are also currently facing habitat destruction, pollution, and overfishing. The fact that most walking shark species are restricted to very small areas makes them particularly vulnerable to these threats. However, because so little is known about walking sharks, scientists aren’t sure yet whether they are in danger.

Corrigan and her collaborators are now working to understand in more detail where exactly each of these sharks is found, how tied they are to particular regions, and what threats they face. Hopefully, this will give scientists the information they need to come up with strategies to protect each of these species.