Kea parrots use statistics to get what they want

Polly wants a black token — and knows how to get it. 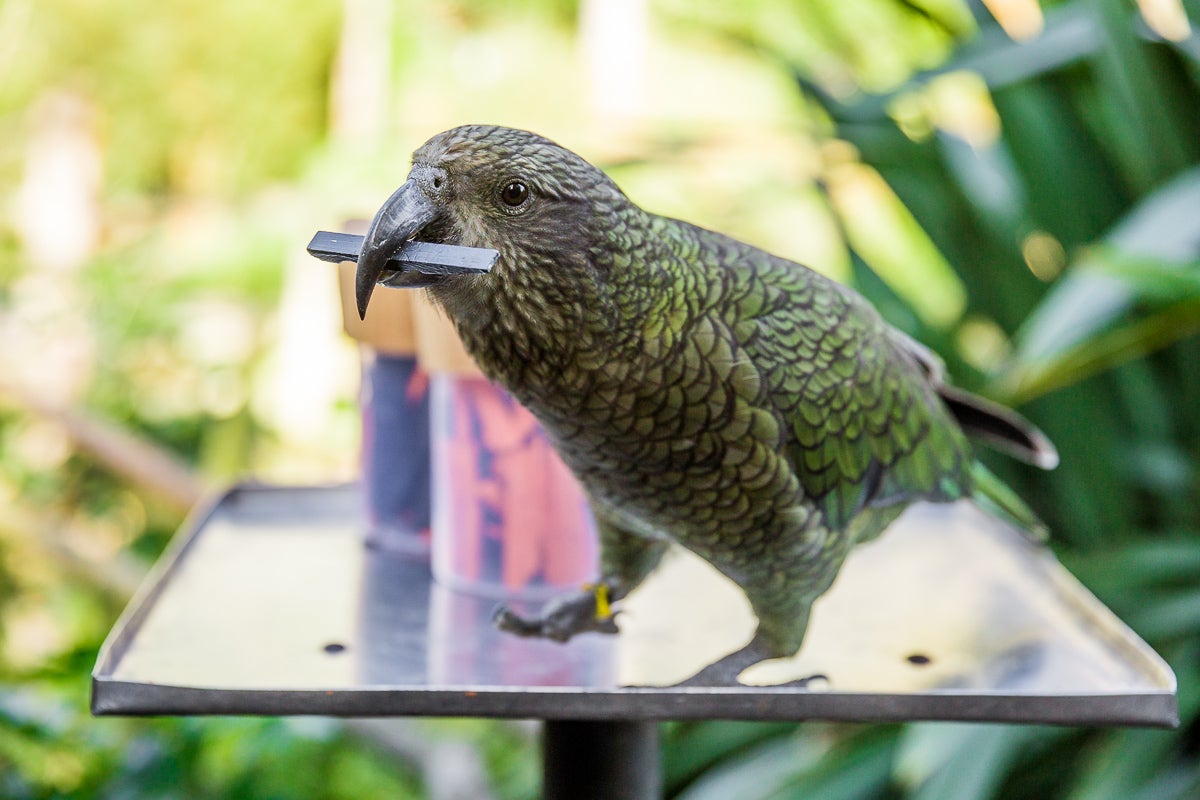 These smart little guys knew which bowl would be more likely to land them a black token, and in return, a yummy snack. Amalia Bastos
SHARE

Let’s say there are two bowls of M&Ms in front of you: one with 90 blue candies and 10 yellow candies, one with 50 blue and 50 yellow. If blue were your favorite color — which bowl would you choose to blindly pick from? Or, if someone dug into the first jar, what color would you guess they have?

“Seeing as the majority is blue candies, they should guess blue,” says Amalia Bastos, a PhD student in comparative psychology at the University of Auckland. Statistically, it’s more likely that if you dive your hand into bowl #1, you’ll score a blue M&M than if you go for the 50/50 route in bowl #2.

That might sound like painfully simple statistics, but that’s only because you’ve known it for a long time. Humans have been shown to understand this statistical concept at a very early age, and they can explain their thinking around elementary school age. But even adult humans don’t have a perfect understanding of probability—just look at how many people dig out their umbrellas around when it goes from a 20 percent chance of rain to 30.

But it turns out birds also have an inkling of this mathematical understanding. In a new study led by Bastos and colleague Alex Taylor, keas, one of New Zealand’s most intelligent parrot species, were able to act on their sense of probability to get a treat. In some tasks, they even outperformed primates.

The researchers laid out three different tasks to test whether or not the cute parrots were also statistical whizzes. The birds were first taught that if they picked out a black token, they’d get a treat. Pick out an orange token, no treat.

In test one, they saw two different jars, one mostly black, one evenly mixed, and then a researcher drew one token from each and kept it hidden in their fist. The parrots tapped on a separating glass to let the researchers know which hand they predicted had a black token. The smart little birdies, at a rate around 17 out of 20 tries, tapped on the side with the high-percentage black jar.

This even worked if the number of the black tokens was the same in both jars, but one had a higher ratio of orange to black.

In experiment two, a boundary was added between the top and bottom halves of both jars, adding a physical component to the simple probability question. The birds were able to guess which fist was more likely to hold a black token: looking only at the top half of the jar—ignoring the rest underneath the divider.

A third experiment added a twist: two experimenters chose a token each, where one was fishing around for a black token in a mostly orange jar, and the other chose randomly. When the kea picked a person to take the token from, they successfully remembered the researcher who clearly had a bias towards black tokens.

That final round tests something called “domain-general intelligence,” or an ability to put together multiple cues to predict the future, says Bastos. It’s the same kind of thinking people use playing poker. “You can sort of guess what the next player is going to do, not only on the probability that they have a certain card but also, telling if they are lying or bluffing,” she says.

Irene Pepperberg, a Harvard researcher and parrot expert, isn’t sure that all of this adds up to real statistical understanding. In the first two experiments, she says that the birds might be able to understand relative amounts. However, they’re not necessarily clued in to the fact that even if they pick the mostly black jar, they could still lose. “To really understand probability and statistical reasoning, a subject must understand that although X is more probable, Y can still happen,” she told PopSci in an email. “Even though ‘more is more likely,’ it doesn’t guarantee success.”

So when it comes to being just as bright as apes and infants, she notes that both of these groups just showed an intuitive sense of statistics,’ which is really just a way to generalize the world around them.

With all this knowledge about bird decision-making, she says perhaps those in the tech world can take some inspiration from the powerhouse brains of our smartest feathered friends.