The award for Most Valuable Pee-ers goes to… 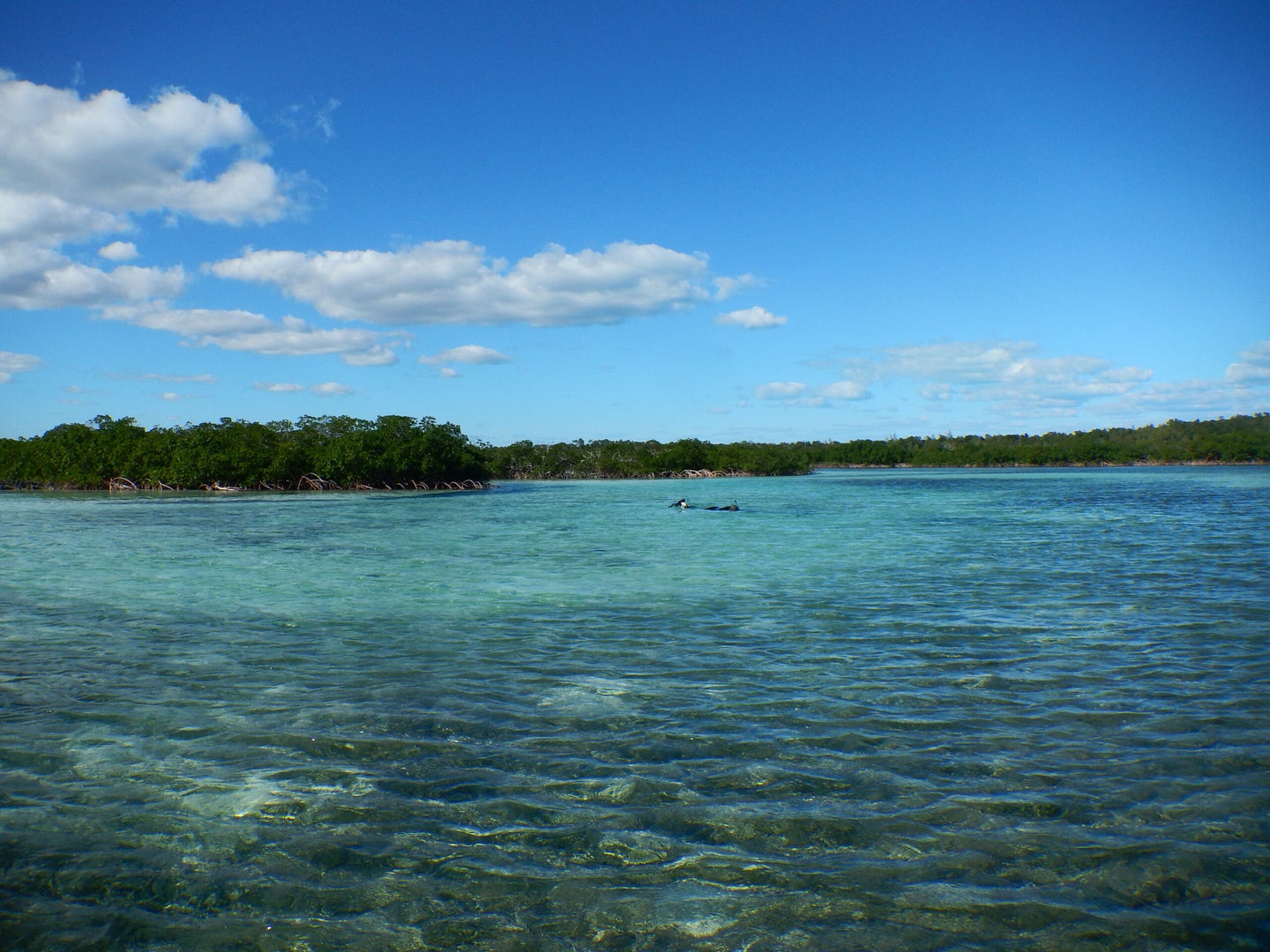 The mangrove-lined estuary on Abaco Island in the Bahamas. Craig Layman
SHARE

For the mangrove forests that line the coast of Abaco Island in the Bahamas, fish pee is a precious resource. While fish such as cubera and gray snappers roam the mangroves in search of a meal, they excrete “fish pee” through their gills which, among other substances, contains the valuable nutrient nitrogen. However, it turns out that some of these fish do more than their fair share of this important and messy work, scientists reported February 26 in the journal Science Advances.

These MVPs spend more time swimming around their mangrove homes than other members of the same species. The busy fish spread more nitrogen around during their wanderings, fertilizing the mangrove trees and algae growing on their roots so they can grow lush and feed the fish, crabs, and other animals that people depend on in turn.

“There are certain individuals that really do have disproportionate roles in the cycling and distribution of nutrients in these [ecosystems],” says Jacob Allgeier, a coastal ecologist at the University of Michigan in Ann Arbor and coauthor of the new study. “It’s essentially fueling this food web that is so important for the subsistence of millions of people…throughout the world.”

Scientists have long understood that a diverse array of species of plants, animals, and other organisms is critical for healthy, resilient ecosystems. Researchers have also recognized that certain so-called keystone species can play an outsized role in keeping an ecosystem running smoothly—such as mangrove trees that buffer the coastline from storms, hold soil in place to prevent erosion, and shelter many kinds of animals.

But it’s becoming increasingly clear that individuals within a species matter too, says Simone Des Roches, an ecologist and evolutionary biologist at the University of Washington in Seattle who was not involved with the research.

“The trait differences among individuals…within a species can be really, really extreme,” she says. “We’ve always known that, but we haven’t really acknowledged how much of an ecological effect that can have.”

Epidemiologists have seen this principle in action during outbreaks of infectious diseases. Some people seem to have a greater ability to transmit diseases than others, and during an outbreak each of these super-spreaders can infect many other people around them.

But variation between individuals can also be a boon for ecosystems, as Allgeier and his colleagues saw. The team had previously found that certain fish species supply more nutrients to the mangroves than others, and that larger fish pump out more fertilizer than smaller ones. However, they suspected that this wasn’t the whole story.

The researchers implanted radio transmitters into 33 gray snappers and 25 cubera snappers and inserted nine receivers into holes in the seafloor where the fish shelter during low tide. Whenever the researchers picked up a signal from a particular fish, they knew the fish was resting in one of the holes instead of exploring outside.

The team tracked each individual fish’s activity over a period of 30 days. They also recorded the temperatures of the animals’ surroundings, which were warmest in the shallow, sunlit waters where the fish foraged.

Allgeier and his colleagues then estimated how much fertilizer each of these fish sprinkled on the mangroves. For the sake of comparison, they also calculated the amount of nitrogen each fish would hypothetically contribute based on body size alone.

They found that the fish were a motley crew—some individuals were much livelier than others. Both exercise and time spent in warm surroundings gave the animals’ metabolisms a boost. This meant that the more active a fish was, the more energy it needed to consume, the more nutrient-filled urine waste it released, and the more places it fertilized.

When the researchers took these industrious urinators into account, their estimates for how much nitrogen was present in the mangrove ecosystem nearly doubled. The most active fish weren’t necessarily the largest ones; it’s not clear why some individuals moved around more than others, Allgeier says.

Gray snappers and cuberas are popular targets for spearfishing and anglers throughout the Caribbean. “This is the kind of fish that you’d see at any fish fry in the Bahamas; this is standard in peoples’ houses on the dinner table,” Allgeier says. While fishermen usually go after larger fish for spearing, anglers are more likely to catch bolder, more active individuals.

Allgeier and his colleagues estimated what would happen if 50 percent of the gray snappers and cuberas in the estuary were caught by fishermen under different scenarios. To their surprise, they found that removing the most active fish would slash the amount of nitrogen in the ecosystem by up to 69 percent—a larger impact than targeting fish randomly or based on their size would have.

Just because the most important fish are prime targets for fishermen doesn’t mean the mangroves are in danger, Allgeier says. “[This species is] fished commercially but it’s not on a really large scale,” he says. “It’s not on the level of cod.” The estuary he and his team examined is also rarely visited by fishermen, Allgeier adds.

However, the findings do show that certain individuals play a more vital role in their ecosystem than their peers, and and losing them in larger numbers could have more profound impacts.

“I’m not necessarily saying that we should manage these ecosystems based on fish pee,” Allgeier says. “We need to learn a lot more about these [ecosystems] to become really good managers of these fisheries.”

There are likely many other cases where differences in how members of the same species behave shape the surrounding ecosystem. If we want to conserve these habitats, it won’t be enough to keep plant or animal populations from dwindling, Des Roches says.

“If we’re considering the ecological role of species…we can’t just say, ‘let’s conserve this certain number of individuals,’” she says. “We also have to consider the variation and representation of different traits within those populations.”