A healthy wasp microbiome can fend off pesticides

Scientists hope to one day develop probiotics that shield humans too. 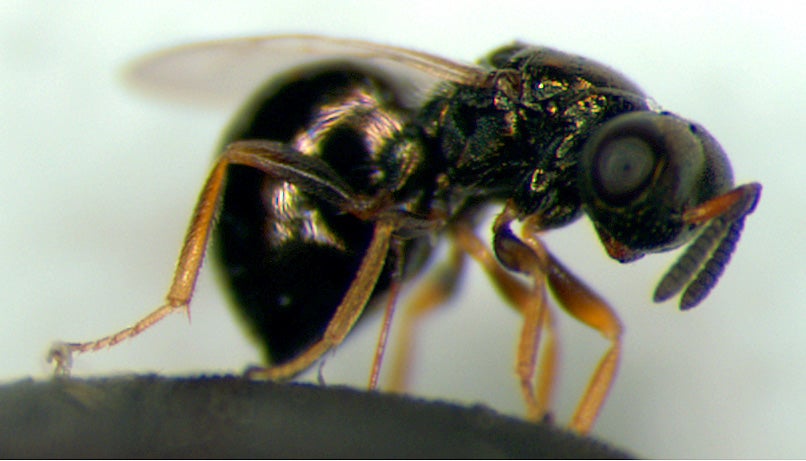 When wasps were exposed to low doses of a common pesticide, the makeup of their microbiomes changed and the insects became more resistant to the chemical.
SHARE

It’s easy to forget about the teaming community of bacteria and other microscopic life forms that live in the guts of every animal. But without these tiny organisms, us larger life forms wouldn’t survive. They do everything from helping us digest food to regulating our mood. Now, scientists have identified another bacterial boon in insects. When wasps were exposed to low doses of a common pesticide, the makeup of their crucial gut microbiomes changed as certain bacteria became more abundant. After several generations, these changes made the insects more resistant to the chemical.

The researchers hope to better understand how gut bacteria protect their insect hosts. This could eventually lead to developing probiotics for wild honeybees, other animals, and even people who are at high risk of coming into contact with dangerous pesticides.

Researchers narrowed in on a specific pesticide, a chemical called atrazine, which is the second most commonly sold pesticide globally. It’s often used in the Midwest to clear plants from areas where corn will grow and is less toxic to animals and people than other chemicals.

“Part of why it’s considered safe is that bacteria in soil and water can eat it and make it into smaller and smaller less harmful compounds,” says Robert Brucker, a microbiome scientist at Harvard University, who published the findings February 4 in the journal Cell Host & Microbe. “I wanted to know if gut bacteria could do the same thing.”

He and his colleagues investigated how atrazine altered the gut microbiomes of a species of parasitoid wasp named Nasonia vitripennis. They fed wasps sugar water laced with a dose of atrazine similar to the concentration that wild pollinators would encounter in atrazine-sprayed fields. After this single dose of pesticide, the bacteria in the insects’ guts became more diverse and abundant. Two very rare strains of bacteria that possess the ability to break down atrazine became more plentiful as well. Mother wasps ensured that their offspring had this altered microbiome by laying eggs covered in the bacteria. After six generations, their descendants still possessed the altered bacterial community—despite never having been exposed to atrazine.

The team then fed wasps a slightly lower dose of atrazine and followed the insects and their progeny over 36 generations, giving each fresh generation a single hit of atrazine. Over time, the wasps became “nearly completely resistant” to the poison, Brucker says. By the final generation, the amount of atrazine needed to kill the wasps was 10 times more potent than the lethal dose for regular wasps. The insects also became less vulnerable to another pesticide—glyphosate, a key ingredient in Roundup—that they had never encountered before.

It’s not unusual for insects to develop resistance to a pesticide after being regularly exposed to it for several seasons. However, the researchers were surprised to discover how significant a role gut bacteria played in this survival mechanism. When they deprived the wasps of this altered microbiome by removing bacteria from newly laid eggs and raised the insects in a sterile environment, this resistance completely vanished. Germ-free wasps whose mothers had been exposed to atrazine were just as vulnerable to the pesticide as wasps whose mothers had never encountered the chemical. However, when the researchers fed these deprived wasps gut bacteria from insects that had been exposed to atrazine, the insects became resistant to the chemical. This indicates that it wasn’t any physiological adaptation the wasps themselves had that allowed them to withstand atrazine, but rather it was their gut bacteria providing the protection.

The wasps Brucker and his team examined don’t pollinate crops. However, he suspected that wild honeybees might harbor atrazine-busting bacteria as well, since they’ve been exposed to the chemical since the 1950s. When he sampled bacteria from bees on his family’s farm in Ohio as well as several organic farms, he identified genes in the bacteria themselves linked to the ability to degrade atrazine in a majority of the insects.

“Regardless of where I sampled, I would find honeybees with [bacterial] genes that could metabolize atrazine; whether they’re the same exact bacteria or if it’s different bacteria doing the same thing I don’t know for sure,” he says. “It was a nice confirmation that what we did in the lab is not too far removed from what might be happening in the wild.”

Humans might also harbor bacteria that break down atrazine; when Brucker and his colleagues checked previous reports on the human gut microbiome, they identified genes that were linked to atrazine degradation.

Next, they want to learn more about what kinds of bacteria convey resistance to pesticides, and whether the changes to the microbiome observed have any drawbacks to the host. Then they plan to concentrate the bacteria into a more potent form to use as probiotics.

“The ability for a microbial community to allow its host to adapt in very short generation times is a remarkable aspect of survival and evolution that we need to continue to experimentally test and verify,” Brucker says.