A gentle zap of electricity keeps these animals on the move. 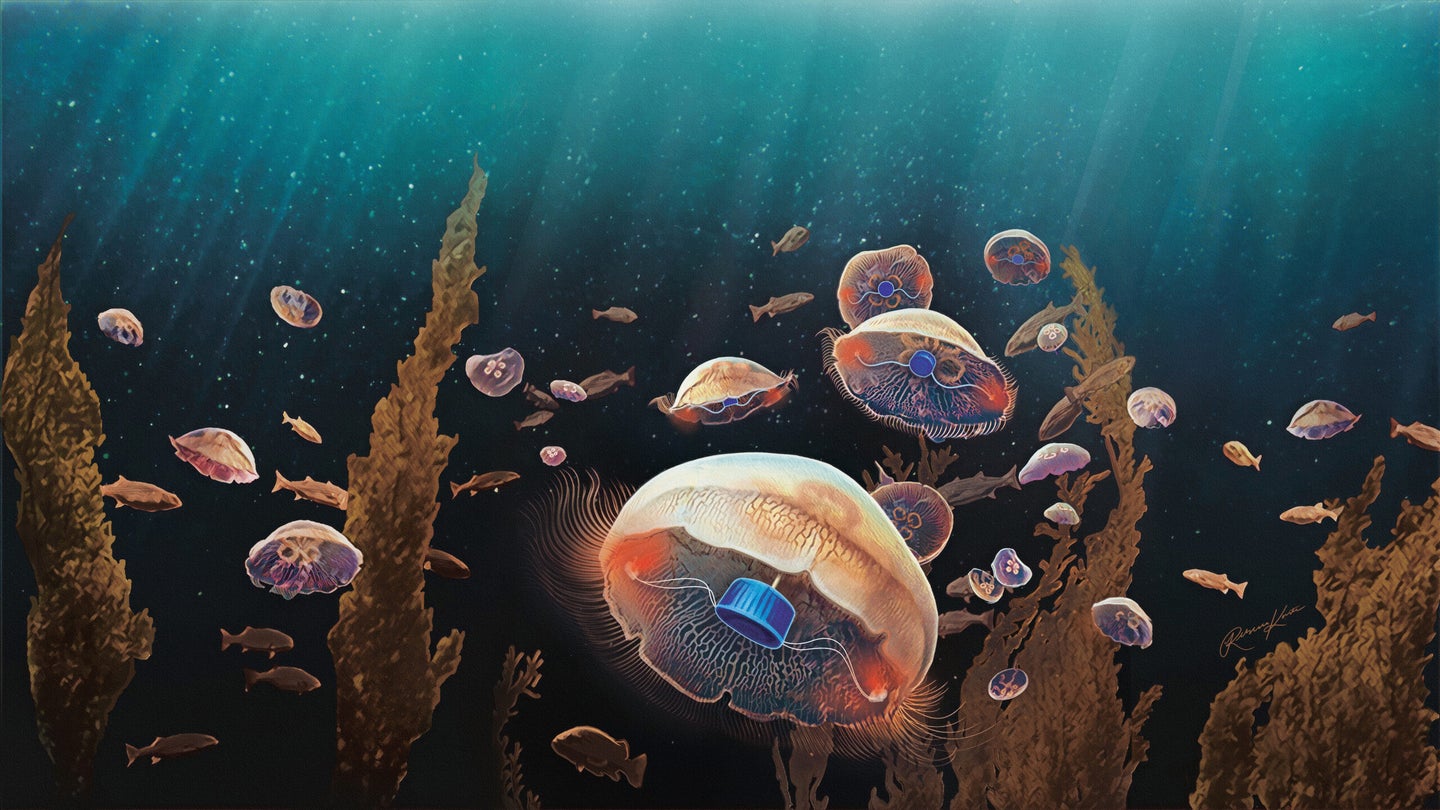 Some people need a cup of coffee to really get moving. For jellyfish, a jolt of electricity apparently does the trick. Scientists have implanted tiny controllers in live jellyfish that use electric pulses to direct the animals’ movement. With the electrical aids, the animals swam at nearly three times the speed of normal jellies while expending only twice as much energy. The prosthetic didn’t injure the animals, and the researchers hope to use the turbocharged jellyfish to explore the world’s seas.

“What we’re hoping this technology can do is provide our first window into what’s happening in the majority of the ocean,” says John Dabiri, a mechanical engineer at the California Institute of Technology, who published the findings January 29 in the journal Science Advances.

The humble jellyfish might not have a brain, but it does have the impressive distinction of being the most energy-efficient of all swimming animals. “Some of that goes to their evolutionary heritage of being the first animals to learn to swim some 500 million years ago,” Dabiri says. Jellyfish move by contracting and relaxing their bells; these pulsating motions create donut-shaped swirls of water called vortex rings that propel the animals forward without much effort on their part.

Before outfitting jellyfish with exoskeleton-like attire, researchers first built soft, flexible robots that mimic the marine animals’ swimming motions. However, the robots demand much more energy than real animals do and are typically tethered by a power cord. Dabiri has also teamed up with researchers at Harvard University to build a less power-hungry jellyfish out of rat heart muscle cells. They could control the artificial jellyfish by contracting the muscle cells, but the delicate robot couldn’t function outside the lab.

Dabiri and his colleague, Nicole Xu of Stanford University, decided to harness the power of real jellyfish instead. The animals feed themselves, so only a little extra energy would be needed to control the prosthetic device. They’ve also colonized every part of the ocean—from the arctic to tropical waters, and from the sea surface to the depths of the Marianas Trench.

“They’re already operating in that domain that we’d like to explore,” Dabiri says. “The trick then is how do we give them a brain so we can tell them where to go and when?”

They implanted microelectric controllers in live moon jellies, a species that is common in both the wild and in aquariums around the world. The team expected that the jellyfish outfitted with prosthetics would swim more quickly than regular jellyfish. “What was more surprising was that they’re more efficient at swimming at those higher speeds,” Dabiri says. Relative to their size, the hybrid jellyfish demanded between 10 and 1,000 times less power than other aquatic robots.

In the wild, moon jellies probably don’t need to tap into these dormant powers of propulsion, Dabiri says. The average jellyfish isn’t actually trying to travel from one point to another; its efficient swimming motions are mainly useful for catching prey. If jellyfish can draw food into their waiting tentacles from the surrounding water using these leisurely strokes, there’s no need to hustle.

Life in the fast lane didn’t seem to harm the jellyfish either. The animals have no central nervous system or pain receptors. Jellyfish do secrete mucus in stressful situations, but Dabiri and Xu didn’t observe the moon jellies engaging in this slimy behavior during the experiments. And when they removed the implants, the jellyfish went back to swimming normally.

Eventually, Dabiri plans to fit sensors on the jellyfish so scientists can send them on voyages into the depths of the ocean. The remotely operated vehicles that currently explore this dark, cold realm typically only have enough juice to last for 12 to 24 hours of traveling. “There is a lot of life in deeper waters that we simply aren’t able to observe,” Dabiri says.

The enhanced jellyfish could also collect valuable information about the ocean’s climate. Dabiri envisions the animals roaming seas around the world, outfitted with sensors to measure key variables such as water temperature, salinity, acidity, or oxygen levels. The jellyfish could even gather data about the microbes that inhabit different parts of the ocean.

Before the jellies can be deployed on these missions, the researchers will need to figure out how to guide the animals in different directions. They’re currently experimenting with sending electric pulses to different parts of the jellies’ bodies to make them turn. By making the muscles on one side of a jellyfish contract at a time, Dabiri says, they can prompt the animal to change course or even make a U-turn.