How minerals and rocks reflect rainbows, glow in the dark, and otherwise blow your mind

Nature's imperfections make a feast for the eyes. 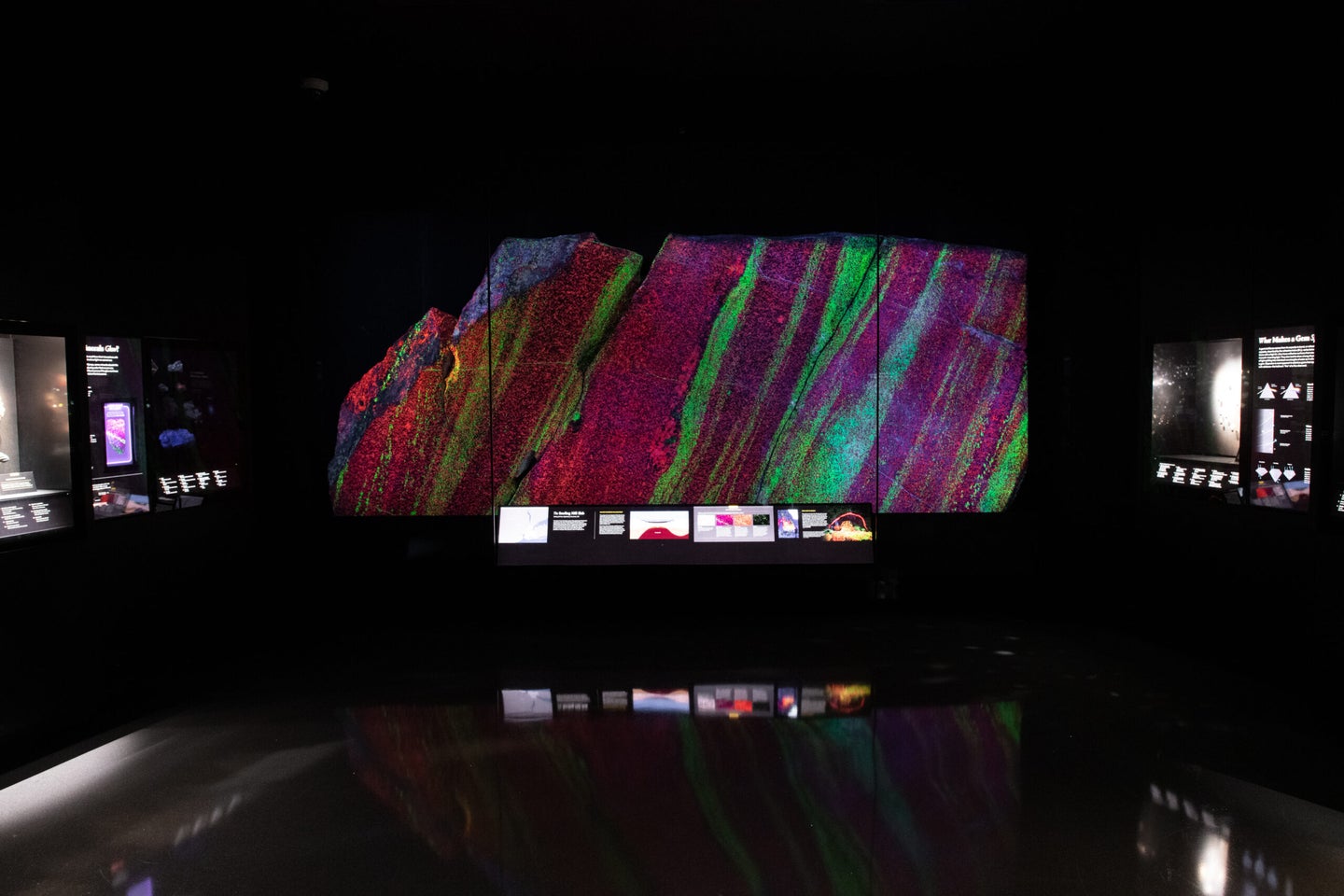 Minerals are the non-living building blocks of the natural world. They form rocks, strengthen our bones and teeth, and even allow our blood to carry oxygen. But even when minerals aren’t assembled into a majestic mountain range or keeping the human body running, they’re still pretty neat.

There are thousands of recognized minerals out there (5,703 to be exact) with many more yet to be discovered. And they come in more hues than you can imagine. “All the colors of the rainbow occur in minerals,” and more, says George Rossman, a mineralogist researching mineral spectroscopy at the California Institute of Technology.

Beyond the striking displays that we see by daylight, many minerals glow with hidden colors under ultraviolet rays. And the coolest part is, their shining colors and otherworldly fluorescence are all thanks to a few small tweaks and imperfections.

What even is a mineral?

Minerals are “considered to be naturally occurring, inorganic solid substances,” Rossman explains. But he says even that definition can sometimes get “fuzzy.” “If a tree decays and leaves some crystalline material behind. Is that mineral or is it a biological material?” he asks.

Nonetheless, most mineralogists agree that their study objects are solid compounds formed by natural processes and characterized by a single chemical composition and crystal structure. Rocks are made up of many different minerals mixed together, and gemstones are particularly structurally perfect pieces of mineral crystals.

Although minerals are classified based on their ideal “pure” composition and form, “we’ve got to recognize that nature has 80 some different elements to play with,” Rossman says. “There are little bits of all sorts of minor components. You rarely get something absolutely chemically pure in nature.” Mineral formation is a chemical reaction. The impurities that end up in a mineral and the atomic structure both come from the environment and circumstances it crystalizes in.

Further, the classification of a mineral not only depends on its chemical makeup, but also its internal atomic arrangements. “Kyanite, andalusite, and sillimanite are three minerals we find in metamorphic rocks that have exactly the same chemical formula, but different structures,” says Rossman. He also points to one of Earth’s most common minerals, olivine, as an example. Olivine is found at relatively shallow depths in the planet’s mantle, he explains, “but as we go to higher and higher pressures, deeper in the Earth, it transforms into other structural arrangements that are given other names.”

The way a material absorbs and reflects different wavelengths of light determines its color. For instance, leaves on a tree are green because chlorophyll absorbs red and blue light, reflecting green and yellow wavelengths back to your eye.

Knowing how minerals are classified can help us understand why they display so many different colors. Both chemical impurities and atomic structure play a role in color because of how they change a mineral’s light-absorption spectrum. 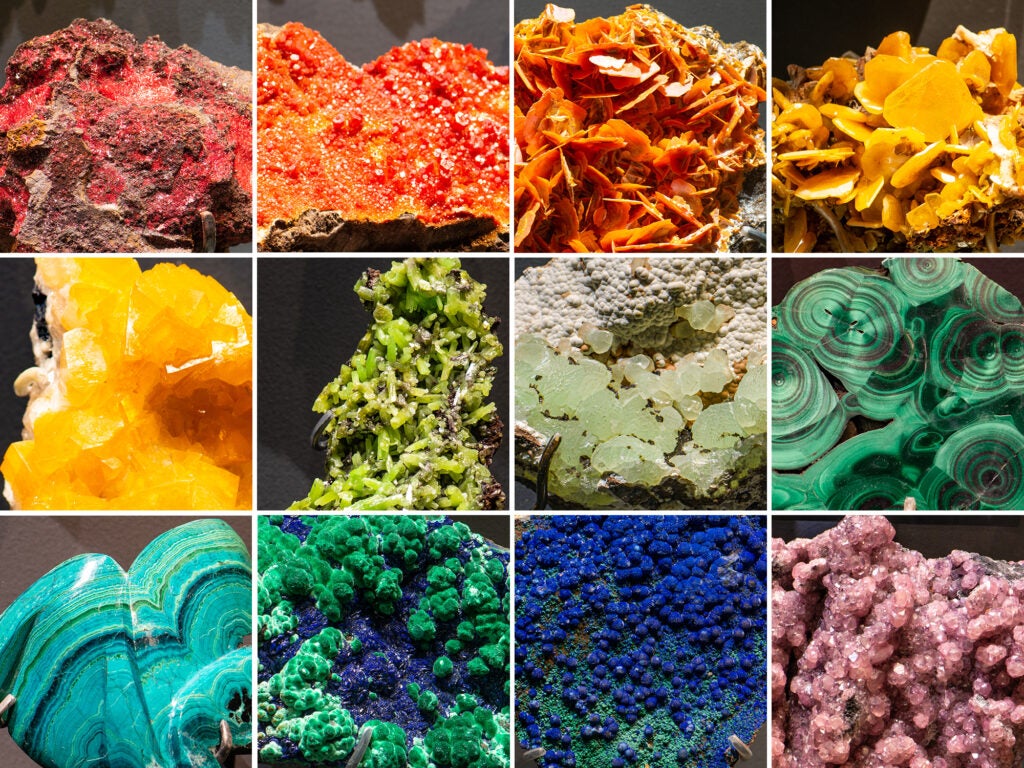 For instance, a ruby gets its brilliant red color by swapping a little bit of chromium for aluminum in its formula. But if you take the same formula and add titanium or iron instead for chromium, you get a sapphire, says George Harlow, a mineralogist and curator at the American Museum of Natural History in New York. Both of the gems are impure versions of the transparent mineral corundrum.

[Related: How humans created colors for thousands of years]

The same chromium (Cr 3+) that makes rubies red can also lead to the formation of bright green emeralds, due to differences in molecular structure, Rossman explains. In rubies, the chromium atoms are positioned close oxygen atoms. In emeralds, the oxygen and chromium sit farther apart, shifting how the molecules absorb light.

Why do some rocks glow?

If color is the way a mineral interacts with light, fluorescence is an extension of that.

Some minerals are so fluorescent that you can experience the effect in full sun. Others require higher-energy ultraviolet rays to trigger wavelengths strong enough for human eyes to detect. That’s why when you look at a neon highlighter or a white shirt under a black light, they seem to glow. Both highlighters and white clothing often rely on UV-reactive dyes to look extra-bright in daylight, so they’re fluoresce a little bit in the sun. Under the targeted, high energy rays from the black light, though, their fluorescence is even more obvious.

About 600 minerals are confirmed to glow in the dark, says Glen Waychunas, a mineralogist who studies fluorescence and spectroscopy at the California Institute of Technology. He adds that it’s common in certain places where geological places, like Franklin, New Jersey, where the famed Sterling Hill Mine sits.

Just like with color, fluorescence in minerals is often the product of impurities, called activators. These elements react with UV light to produce fluorescent colors, working in tandem with the minerals they’re in. Some may exhibit different colors with the same activators, and others may not glow at all. In addition, there are impurities called “quenchers” that can stop an activator from working, even if all other conditions are right. And if there’s too much of a single activator, it can “quench” itself, preventing fluorescence. It’s a complex interplay between different atoms.

Structure is also important for understanding fluorescence. Mineral defects, which are like typos or misprints in the structural scaffolding, can leave a little extra space in the matrix—providing a gap for excited electrons to move around in. The particles then absorb energy and dance it out as colorful wavelengths of fluorescent light, even when no activating compounds are present.

Where can I see glowing and rainbow-colored rocks?

This summer, take advantage of the mild weather and explore the geological formations around your home. You might just catch some fluorescence in action. For the best odds, Waychunas recommends minerals hunting at night with a UV flashlight. “Go to an [old] quarry or go to a place with just an outcrop of rocks,” he says. “People will be surprised at what they might find.” Even in areas where fluorescent rocks are less common (this website can tell you what’s good in your neighborhood), the infill at construction sites or landscaping gravel brought in from elsewhere can offer a secret treasure trove of glow. “It’s just another interesting viewpoint of nature to see this phenomenon everywhere,” Waychunas says.

If you strike out searching on your own, you can probably find fascinating examples of fluorescence at your local natural history museum. In New York City, the American Museum of Natural History has a brand new mineral and gem exhibit, where you can see all of the pictured minerals above in person.