Before they grow into splendor, flamingos are just awkward floofs

Take a photographic journey through the Yucatán's busiest flamingo nursery. 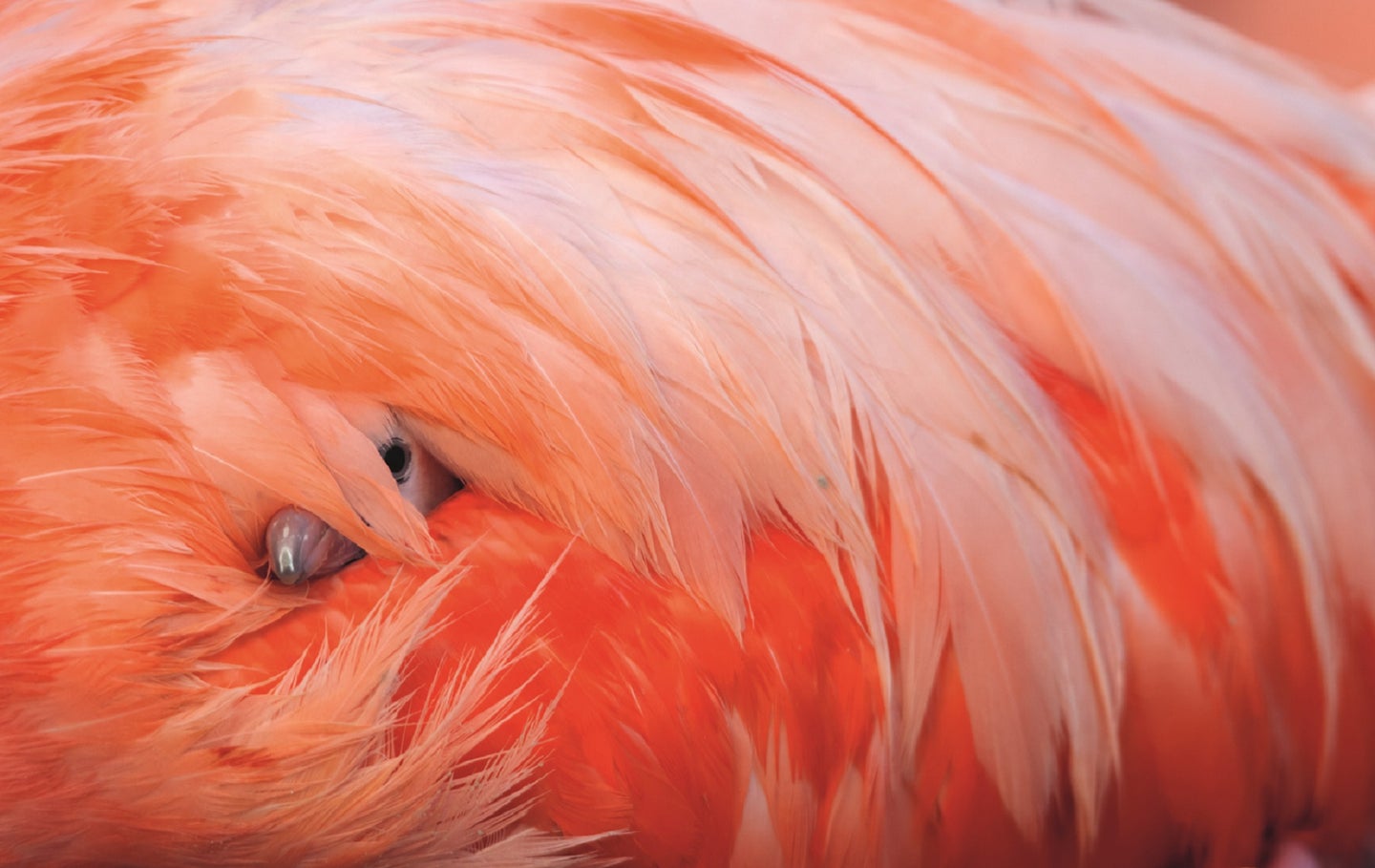 "Soon, I see a little white head peek out of the orange plumage. I imagine that this little creature must think the whole planet is orange". Claudio Contreras Koob / naturepl.com
SHARE

As spring draws to a close, the long wait finally ends with the birth of thousands of flamingos. To document this sensitive process, I had to approach the sandy islet where the birds had settled in complete darkness. From the shore, the murmur of the colony was barely audible, but loud enough for me to estimate that the population was situated some 800 meters away from me, an assessment that I managed to confirm as soon as I crossed the water and mud to reach the islet. Once there, I was surrounded by a plethora of noise.

Crouching down, I sneaked over to a small dune that gave me enough cover to prepare for my final approach. With my equipment ready and myself in camouflage, I crawled as low to the ground as I could towards the birds. Halfway there, I paused, waiting for more light so that I could see the backlit silhouettes of the flamingos, showing me if I could approach and whether they were aware of my presence. If a single flamingo stood up from its nest, that would tell me that it didn’t feel safe, so I would have to stop and retreat. From that point on, I proceeded very slowly and carefully—at no point did I want to disturb the colony.

My patience paid off: by sunrise, I found myself relatively close to the nests. The adults were busy preening their feathers, starting the new day quite relaxed. The cacophony of the colony was deafening. Suddenly, an adult sitting on a nest began to stir strangely, as if something was bothering it. It composed itself and returned to sitting on the nest. As it adjusted itself, I could see a small, white head trying to peer out through the orange feathers. Surrounded by a sea of orange consisting of about 15,000 nests, I imagined that this little creature must have thought that the world was orange.

Frail and curious, the chick managed to stick out its beak. The tip of its beak was a little lighter: it was the egg tooth, a small protrusion used specifically to breakthrough the shell and it would disappear soon after hatching. The chick quickly moved on to the most important activity of its short life: it begged for food from anyone who was around. Through my telephoto lens, I could see it asking for food. Despite my distance from the nest and through all the excitement around me, I could make out the adult being called by the nestling; each flamingo has a unique screech by which adults and their young can identify each other within a colony.

The adult responded by holding the chick’s head between its wing and body, while at the same time, moving its neck and jaw to regurgitate food for its young. Coordination was not easy for the nestling when it could barely hold its head up, but when both beaks managed to touch, I could see a red liquid pouring from the tip of one into the other, as if life itself was being passed from parent to offspring.

The red fluid that fed the nestling is called crop milk. Both adults produce this secretion in the upper part of the intestine. Incredibly, after only a few days of having been fed the crop milk, the chick was wandering around the nest, flapping its little, white down-covered wings, while the adult desperately tried to keep it within the borders of its nest.

This phase is the most dangerous in the life of a flamingo, because although its legs are thick and provide it with good support, the chick itself is very unstable. After barely five days of its life in the nest, it is bored and wants more freedom to roam, but the parents know that a fall from the nest can cause it to break a leg or a wing, thus endangering its chances of survival.

[Related: 8 ‘insignificant’ creatures that will make you dream about the ocean]

The next morning, I waited in the same spot for the sun to rise. Earlier on, I could sense a subtle but constant movement from within the colony: it was the adults’ turn to leave the nest. All together they moved slowly forward, preening at times, along the same route. With each stride, they traversed avenues invisible at ground level, until they reached the colony’s edge. From there, they would take off in search for food. I was also fortunate to witness the reverse process: the adults returning to the colony, entering and disappearing into the orange labyrinth with the knowledge of the exact whereabouts of their own offspring.

A few days later, I returned to the same spot and saw one of the adults trying to contain its increasingly adventurous nestling by holding it between the legs with its beak, trying to force it to sit down. In the end, what the adult had tried so hard to prevent happened anyway: The nestling made it to the edge of the nest. It took a big step towards freedom, and rolled down the mud walls to the ground.

Luckily, everything turned out well: the chick was upside down on the ground, but it was okay. It quickly sat up and began to explore its surrounding world with its beak. It discovered pebbles, small shells and pieces of eggshell as it wandered around the alleys that separated its nest from those of its neighbors. Everything was new for the young animal. For the first time, its legs experienced the sensation of wading through water; something this bird will do for the rest of its life. Finally having satisfied its curiosity, the chick returned to the nest; or rather it precariously scaled the high, volcano-like walls of the nest using its beak and wings to stabilize itself while pushing upwards with its sturdy, pink legs.

At ten days old, the nestling’s restricted life in the nest was over. It left its nest, never to return to it. At that age, when its down feathers were replaced by grey ones, it wanted to wander the clay streets, to explore every little corner of the orange city with its peers, with whom it formed a crèche or nursery. The little members of this nursery mimicked the behavior of the adults: dipping their beaks into the water as if to filter something and moving them from side to side as they waded through the puddles that had formed around the nests in recent days. At one point, the chicks suddenly decided all together to abandon their expedition and take a different route, and this new route led straight to where I was positioned. I didn’t know what I would do when faced with these innocent little birds which were heading towards me. Luckily, the adults in charge of them stepped in just in time and herded them back to the safety of the colony.

Time flew. Almost two months later, there were only a few inhabited nests and the crèche had grown. Those that were previously chicks were now bigger and covered with plumage, and they kept flapping their wings. The more advanced fledglings, on the other hand, were able to fly a few meters above the water before crash-landing.

The parents had to be very patient when it came to feeding the fledglings because their young were insatiable. To show their dissatisfaction, they would circle the adults and scream at them, despite their seemingly submissive posture. They wanted more and when they didn’t get anything, they stamped around angrily in the water. Unsurprisingly, when an adult had no food for its fledgling, it would escape these tantrums in the only way in which it still had an advantage over its young: by flying away.

Unfortunately, I also saw the lonely chicks roaming around with their wings hanging down; the consequences of a hard fall. Because they were no longer able to fly, their growth was obviously slower. Faced with the lack of mobility, they tried to raise their broken wings with the support of a leg, but to no avail; their fates were sealed.

Towards the end of summer, most of the offspring were able to fly and so the young birds dispersed in all directions. In the three years it took them to become adults, they dedicated their time to gaining experience. It is still not clear whether flamingos simply like to travel or if they have been displaced by the experienced adults from areas that are rich in food, but some have been sighted in the United States, the Cayman Islands and Cuba. Throughout that period of time and up to the age of six years when they have their first offspring, they must learn several lessons: the importance of staying close to the breeding grounds, identifying the best foraging areas and acquiring the skills in terms of couple coordination as it has been shown that those who venture into parenting too soon, fail.

The adults in turn leave the colony after the nesting period to regain strength at their preferred feeding areas along the Yucatán coast. In contrast to when they came to settle in the colony, their plumage looks discolored. The whitish coloring on the head, neck and back comes from the fact that the pigments that once made them so beautiful during their stay in the breeding colony were now destined to fulfill other functions, such as an antioxidant, within the body.

[Related: Songbirds near the equator really are hotter, color-wise]

The day finally came when dawn at the nesting colony was silent; it was strange to be present in the calm after so many months of commotion. The flamingos had left a landscape that resembled something out of a science fiction novel. It felt strange to walk through the alleys which, only until recently, were off-limits, an orange hubbub of noisy activity. Having had the privilege to spend so much time there, it felt bittersweet. On the one hand, walking past the empty nests, I recalled all the birds that had once filled them with life. On the other hand, I could also recall those who had left that one lonely egg in its nest.

If conservation continues to move in the right direction, I know that the calm will be short-lived and also necessary, given the fact that the next surge of colors won’t belong in coming. My greatest wish is that someday, the flamingos will allow me to be with them once again.