Even plastic art decays, but museum curators are on the case

Scientists can help them save their polymer-based collections. 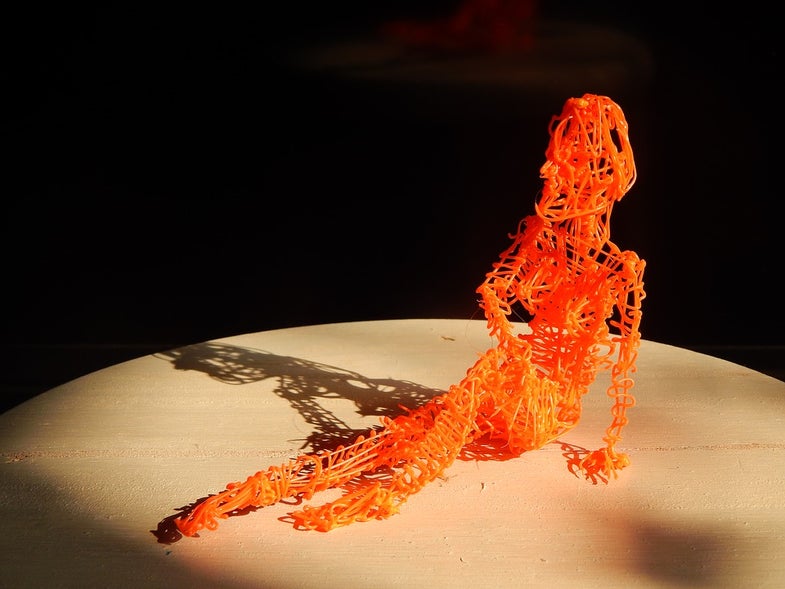 On its face, art is often about beauty. From Mona Lisa’s demure smile to the blue dapple of Monet’s “Impression, Sunrise,” we flock to museums and galleries in search of the sublime. Museum curators ostensibly choose to dedicate their lives to art for the same reason—a profound desire to be closer to beauty—but they quickly learn something many viewers don’t: That art is more often a story of decay and destruction.

Take Leonardo Da Vinci’s other great work, “The Last Supper.” Painted on the wall of a dining hall in a church in Milan, the mural survived a World War II bombing, the carving of a door through Jesus’s feet, and the more mundane—but dastardly—progression of time. Within just two decades of its completion, poor paint and an uncontrolled climate meant the mural was flaking. After just six decades, “The Last Supper” was described as “ruined,” the Apostles unrecognizable. Multiple restorations, namely one project stretching from 1978 to 1999, have brought back its original luster, but the lesson is there. Much like the humans who make it, art is always on the verge of falling apart.

In the last century, curators and restoration experts have made numerous advancements in the preservation of paintings and sculptures. They keep a hawk-eyed watch over the “The Last Supper,” carefully monitor Michelangelo’s David and his weak ankles, and clean and preserve medieval tapestries like “The Unicorn.” But Katherine Curran, a chemist at the University College London’s Institute for Sustainable Heritage, says it’s only in the last two decades that anyone stopped to consider the preservation of artful plastics.

“There was something, for awhile, known as plastics denial syndrome,” Curran says. While artists have relied heavily on plastics since the 1960s (see: Charles Biederman’s pristine plastic and wood sculpture “New York, Number 18” or Naum Gabo’s poorly aged “Construction in Two Spaces: Two Cones,”), Curran says as late as the 1990s, curators “denied they had plastics in their collection.” As a result, many artful plastics started to degrade. “You do get plastic objects in museum collections that have degraded to the point where it’s too late,” she says. Some can no longer be transported without fear they’ll fall apart. Others have decayed to the point of being unidentifiable; an artist may no longer recognize the work they once made.

But, Curran says, plastic denial syndrome finally petered out at the dawn of the 21st century. Now, chemists and curators are in near-constant collaboration, working to preserve the world’s modern and contemporary art collections with methods derived from the field of heritage science. The thing is, no one’s actually certain what the best course of action is.

“Compared with other museum objects, plastics are quite new,” Curran says. While experts have been honing oil paint restoration techniques for centuries, museums are still stumped by plastics. Little is known, Curran says, about how plastics degrade, let alone how to stop it. But perhaps most surprising is the fact that most museums don’t even know the type of plastics in their collection.”Things often get classified as ‘plastic,'” Curran says, “and that’s not that helpful.”

The first step toward preservation, then, is determining what plastics are incorporated in a given piece of art. Cellulose acetate, cellulose nitrate, polyvinyl chloride, and polyurethane foams are often the major causes for concern among heritage scientists, according to Curran.

Cellulose acetate and cellulose nitrate are both central components of old film. And, unfortunately, they’re both susceptible to vinegar syndrome. When the plastics react with moisture, they produce acids, like vinegar, that degrade the material. Worse still, the vinegar syndrome can spread, as acids move from one decaying film to its neighbor. As a result, improperly stored celluloid-based films can turn brittle and ruddy brown over time.

Polyvinyl chloride, more commonly called PVC, is a supremely functional plastic, making its way into just about everything—it’s used as both an alternative to rubber and as imitation leather, among other things. It’s been transformed by artists into conceptual pieces, too. Artist Wang Jin fashioned an imperial dragon robe out of PVC in 2008. Today, “Dream of China” is under the care of The Metropolitan Museum of Art. It’s in stable condition today, but without proper management the materials in the PVC could leach out, creating dusty puddles of waste and making the sculpture susceptible to cracking.

Like PVC, polyurethane foam is an essential component in arts and crafts, but also wheels and tires, adhesives, and synthetic fibers, some of which end up in museums like the Smithsonian as artifacts with cultural or historical significance. While the material is long-lasting, harsh light can cause it to change color, and moisture can cause foams to crumble.

Once a museum has identified the specific type of plastic its working to preserve, Curran says it’s time to analyze the state of decay. Right now, that often requires a museum curator to eyeball signs of trouble. But in a recent study, published this month in the international edition of the German journal Angewandte Chemie, Curran’s team proposed a radically different method for determining the state of a plastic: Smell.

The scientists placed testing strips at the base of several plastic-based artifacts from London’s Tate museum. Over a period of a few days, the strips absorbed the chemicals in the micro-atmosphere within the art’s storage container. When the strips were removed, Curran’s team used a gas chromatograph to identify and measure the volatile organic compounds, or VOCs, emitted by each piece of art. By assessing these plastic vapors, they were able to determine the state of decay for a given artifact. According to the paper, the accuracy of these initial tests was somewhere in the range of 50 to 83 percent.

Curran says her method will need refinement, but it already appears to be an improvement on existing options. “The potential for this is that you could catch these processes at an earlier stage, before the damage is so visually problematic that the artifact has lost its significance,” she says. By using an atmospheric strip test instead of a sample, this smell-based test bypasses potentially-damaging samples and keeps the art intact. And understanding the conditions and rate of decay for various plastics could lead to better storage in the first place, too. If Curran can crack the code, then only the most sensitive objects would be put into energy-intensive, climatically-controlled storage, saving museums time, money, and carbon emissions.

While plastic denial syndrome has disappeared in the museum world, it’s reappeared, albeit in slightly altered form, among museum visitors. Most people think that plastics are forever. They know the water bottle they throw out today will still be sitting in a landfill hundreds of years from now, looking much the same way it does right now. But that thinking is fallacious.

Modern synthetic plastics are remarkably durable, but they do decay—whether they’re on display or dropped in a dump. Plastic water bottles don’t sit tight, maintaining their shape. It’s worse than that: They leach chemicals into our waterways and slowly break into bite-sized bits birds can’t resist. They don’t outlast so much as outpace us, turning the ocean into what many call “plastic soup.” Though museums and environmentalists appear to be doing very different work—the first group is trying to prevent natural decay to man made products, while the second aims to prevent man made products from destroying nature—both are grappling with the two-faced personality of plastics. Based on Curran’s latest research, one can only imagine how both endeavors must occasionally stink.