Better meals and less harassment are perks for females who take on more flashy, masculine coloring. 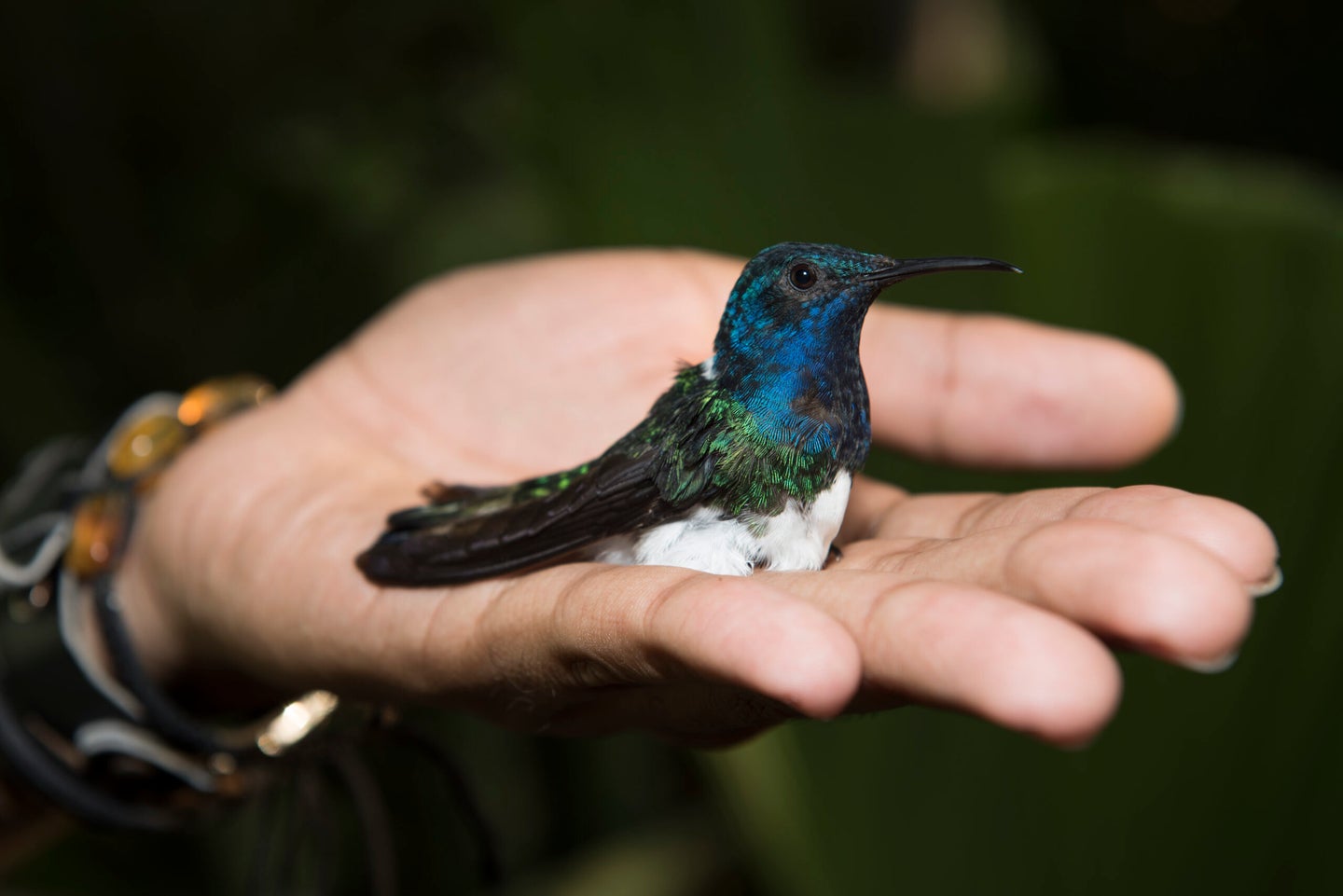 This female hummingbird has taken on the bright blue coloring of her male counterparts. Mendez Cruz
SHARE

However, about 20 to 30 percent of female White-necked Jacobins resemble their masculine counterparts, according to a study published today in Current Biology. Turns out, looking like a male means the fluttering females are much less likely to be harassed by them, which improves their access to food.

“Sexual selection is the dominant narrative in the field for why we expect to see ornamentation in birds,” says lead author, Jay Falk, who conducted the study while completing his PhD at Cornell University’s Lab of Ornithology. “But that doesn’t tell the whole story here. If we want to look at ornamentation in White-necked Jacobins as a whole, including females and males, we have to use social selection.”

While Falk and his team did not discover the phenomenon of some masculine-traited female white-necked Jacobins, they are the first to determine why it happens. “There have been quite a few museum specimen studies, but none trying to look at the behavior which is really needed to understand what might be adaptive about this trait,” says Falk.

[Related: Hummingbirds can see colors we can’t even imagine.]

They found that the change in plumage helps some females and all youths escape social harassment that would otherwise prevent them from feeding. This would mean social competition, not sexual selection, is the main driver of ornamentation in female White-necked Jacobins.

To determine this, Falk’s study was conducted in three parts. During the first phase, the evolutionary biologists captured over 400 hummingbirds over the course of five years, took note of their physical characteristics and drew a bit of blood for genetic identification. They found that not only do all males and some females display the brilliant blue hues, but so do all young hummingbirds regardless of gender.

“There was this interesting thing going on with all the juveniles looking like adult males, which is unusual,” says Falk. “Because of that, we already had an idea that sexual selection was not playing a significant role.”

Falk then had to prove male hummingbirds did not have a preference for ornamented females, to truly rule out sexual selection. He placed two feeders in the field and rotated a taxidermy of the nectar-feeding birds on each. The taxidermy mount was either a male, an ornamented female, or a non-ornamented female. Cameras then captured how their real-life feathered friends reacted.

“Basically, we found that when there was a non-ornamented female present, the males had a very strong preference in terms of mating behavior with those mounts,” says Falk. This was a very strong indication that sexual selection was not responsible for some of the hovering females’ unique coloring.

While reviewing the 78 hours of footage—which also captured how living hummingbirds interacted with one another—the ecologists noticed the traditionally feminine  avians were 10 times more likely to be chased from the feeders than the flashy fliers.

[Related: Hummingbirds get their wild coloring from ‘air-filled pancakes’ in their feathers.]

Thus, for the final portion of the study, the ecologists placed rice grain-sized trackers between the birds’ wings to keep tabs of when, and  for how long, the birds stopped at any of the 28 feeders placed throughout the Panamanian town of Gamboa.

After 278 days and 88,500 feeds, Falk analyzed the data and found male-like females visited the feeders more often and for longer periods of time than the non-ornamented females. This disparity was even more pronounced at desirable and competitive feeders with a higher concentration of sugar. Basically, to have a relaxing, fulfilling meal, the best bet for the birdies is to look as manly as possible.

However, more research is needed to fully understand this rare trait, which is estimated to affect a quarter of all hummingbird species, according to Falk. “One of the big questions that we have yet to answer is that even though there are all these advantages to looking male, only 20 to 30 percent of adult females are ornamented. So why are they still in the minority?” says Falk, who is in the process of writing grants to find funding for future research into the spectacular species.

Plus, he wouldn’t mind watching the winged-critters for a bit longer. “I just really love white neck Jacobins at this point. I feel like in terms of their personality among hummingbirds, they’re just kind of like these jocks. I’ve even seen one of them do a backflip which felt like they were just showing off.”