Frogs have the biggest eyes of any vertebrate in relation to their body size. Researchers are just starting to understand why. 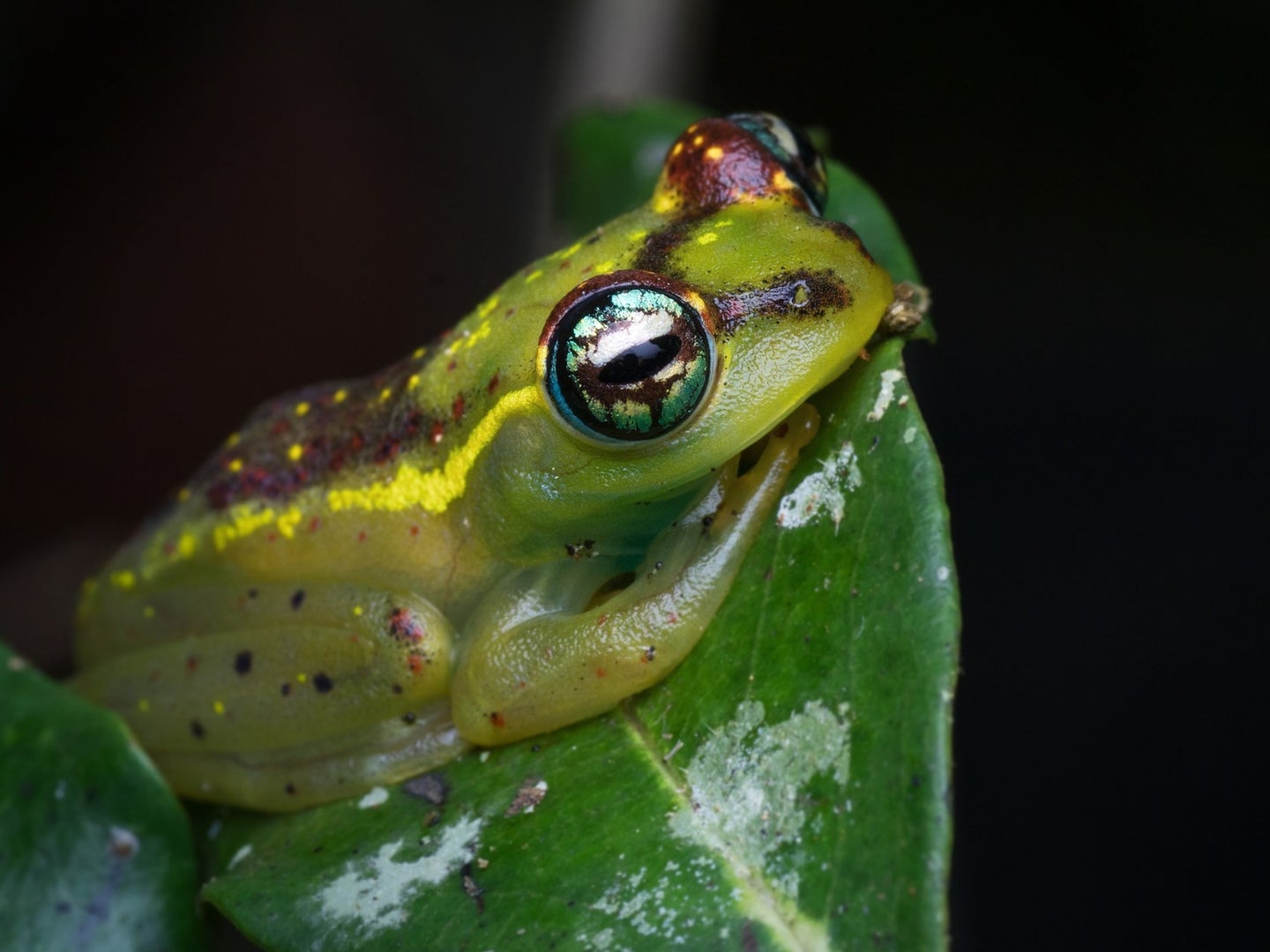 The researchers found that fro frogs that live on trees have the biggest eyes in proportion to their body size. mika mamy en Pixabay
SHARE

Frogs have big eyes. But as evident as it is to the casual observer, scientists need actual data to state what seems obvious—and that data didn’t previously exist. And contrary to mammals, birds, or fish, we didn’t know much about what shaped their evolution.

“It was exciting looking at frogs in the context of broader vertebrates and realizing that, wow, they actually have enormous eyes, and it really merits further study into what they’re doing with these huge eyes,” says Katie Thomas, a biologist at the museum and lead author of the new study.

The research, published in the journal Proceedings of the Royal Society B, fills a gap in the scientific understanding of amphibians’ visual systems, says Carola Yovanovich, an Argentinian biologist at São Paolo University in Brazil who wasn’t involved in the study. “This type of study is very necessary, and I am thrilled that it has been done,” she says.

Almost everything we know now about the eye’s anatomy came out from research done in frogs during the mid-twentieth century, Yovanovich explains. They are the perfect species to study vision: their eyes have huge photoreceptor cells, which makes them easier to manipulate and measure. And since frogs don’t self-regulate their temperature, their extracted retinas can continue operating for hours in a freezing lab, since it mimics the frigid body of the amphibian.

“But all this knowledge was built using a couple of species from the US and Europe. You know, they’re the frogs that scientists found in the university’s garden once they stepped out of the lab,” Yovanovich explains. “We know a lot about those few species, but we don’t know anything about the variety, which is immense.”

In fact, with 7,100 species, frogs are among the most diverse groups of animals on Earth. They exist on four of the five continents–except Antarctica–and can live in ecosystems varying from the deepest and murkiest waters to the highest of treetops.

To capture all of that diversity, Thomas’ team measured eye size in 220 species. To do so, her team dusted off hundreds of pickled frogs in museum collections from three continents searching for answers. “I opened 640 jars of dead pickled frogs and measured their eyes and corneas and bodies,” she says. That included jars at the Natural History Museum in London, the North Carolina Museum of Natural Sciences in the US, and the Bombay Natural History Society in India. She stresses that without these well-preserved collections, research of this scope wouldn’t have been feasible.

She got to see the whole spectrum: frogs with “big, bold, amazing, beautiful eyes,” and the ones that “are super weird and have giant bodies and really tiny eyes.” To make sure that the years spent in those jars hadn’t affected the eyes’ size, the team also sampled 67 live frogs from 50 different species spanning 17 families to compare them with the preserved frogs. They didn’t find any difference between the pickled specimens and their living, breathing relatives. Besides eye and body size, the team also recorded information on where the frogs lived, whether they were diurnal or nocturnal, and certain aspects of their reproductive behavior.

Then they applied an algorithm to look for patterns in the data. Something surprising came up: the frogs with the tiniest eyes live primarily underground and in the water. The team thinks eye size is related to the availability of light in those environments. “If you’re hunting and eating underground, you’re probably not relying on vision as much,” Thomas says. Also, having large eyes sticking out the side of their heads increases the risk of getting injured, scraping them on things like rocks. For those living an aquatic life, small eyes might be related to the fact that they live in turbid water. Even if they had big eyes, they wouldn’t be able to see much. In an evolutionary sense, “it might not be worth growing these big eyes.”

One question the study left unanswered was about how the time of the day in which the animals are active influences their eyeballs’ size (the group tried, but couldn’t find any pattern). Yovanovich thinks that a lack of detailed information about frogs’ behavior could have influenced the final results. “You can easily spot a rhino or a condor and say ‘ah, look, it’s eating right now, it’s behaving this way.’ But you pass next to a frog, and you don’t even realize it,” she explains. Being small, generally silent creatures, they’re easy to miss. That, and the fact that a lot of information for some species has been gathered at the height of their reproductive frenzy (when they’re easier to locate due to their constant singing), could be altering the model.

In the end, this is just a first step in understanding the diversity of frogs, says Thomas. We still don’t know what specific aspect of their habitats fueled an increase in eye size in most of them. Thomas and her colleagues still want to know which genes influence these differences, how and when night color vision evolved (frogs are the only vertebrates that see colors at night), and how they manage to change their visual system as they develop from tadpoles.

“At this point, all we know is that they have big eyes,” says Thomas. “We don’t know specifically why, and that’s something we’re really excited to keep delving into.”