Bed bugs once ate bat blood—so why do they bite us?

The blood sucking critters are not as scary as you might think. 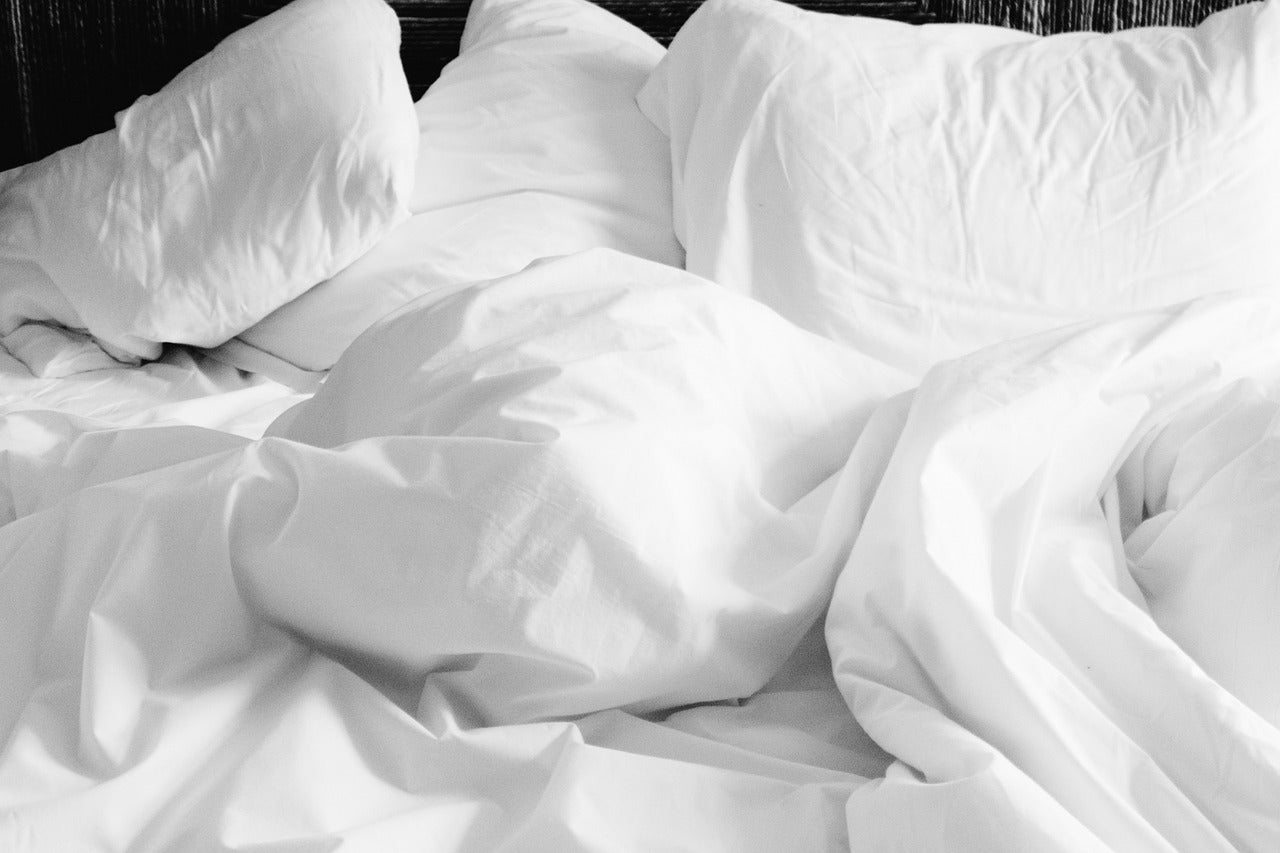 A line of unidentified bites on your arms or legs might have sent you on a Google-spiral and landed you here. Don’t panic: Getting rid of a bed bug infestation is complicated, but far from impossible. And if you’re worried about bringing bugs home, you can take steps to prevent that from happening. The first step is to understand bed bugs.

Bed bugs’ diets only contain one food group: Blood, preferably human. The insects, which go through multiple immature stages before reaching reproductive maturity, need a “blood meal” to level up to each next stage. Once they reach adulthood, they must feed every 5 to 10 days to survive.

The insects are also particularly sneaky about the timing of their attacks. While they only take a tiny drop of blood with each bite, that mouthful can take up to 10 minutes, says University of Florida entomologist Roberto Pereira. So, he says, it’s more beneficial for them to get you when you are sleeping, and therefore immobile.

Bed bugs also don’t like being on a human for very long: being relatively hairless, we’re easy to bite but difficult to climb, and we tend to move, even in our sleep. They tend to sit on the bed and bite several times in one feeding. That’s where the characteristic pattern of bedbug bites comes from: For someone who gets raised bumps from a bite, they often appear in lines of three on one area of the body, a pattern that’s specific to bed bugs.

Of course, lots of insects like to bite humans: If you find that you have bites only around your ankles and you have a pet, you might have fleas (which also don’t tend to bite in a line). If you have a rash, it could be scabies instead. If you have just one or two swollen bites, that might be a mosquito.

As they feed, or just after they are done, bugs eliminate the remains of their last meal, often leaving rust-colored stains or little black dots of excrement on the bedsheets, especially down the side of the bed as the bugs head back to their lairs, known as “harborages.” These insect homes are usually within five feet of the bed, although they can be up to 20 feet away. These spots are a good way to determine if bed bugs are causing your bites or if you have other reasons to suspect an infestation. Using light-colored sheets can make the stains easier to identify.
Many people first notice the bites because they itch. For some, bed bug bites cause an allergic reaction, which can result in anything from a swollen bite mark (think mosquitoes) to an unpleasant itchy rash. Not everybody reacts, though, so looking for bites isn’t a surefire way to know if you have bed bugs)

These symptoms, as well as the knowledge that bugs are in your bed feeding on your blood can be anxiety-inducing. The entire bed bug experience can cause major psychological distress for some people.

But from a health perspective, bed bugs aren’t the worst blood-sucking parasites out there. “People don’t think twice about going fishing or going out in the yard and getting tons of mosquito bites,” says Pereira. But mosquitoes, he says, “transmit some very serious diseases. Bed bugs don’t transmit any at all.”

The only disease that has ever been shown to be transmissible by bed bugs in a laboratory environment is Chagas disease. But it wasn’t passed by a bed bug’s bite, as with a mosquito. Rather, mice who had been bitten by bed bugs scratched infected bed bug feces into their wounds, and contracted the Chagas virus that way. There’s no evidence that has ever happened in the real world with people who have bed bugs, although it seems to be theoretically possible. On the other hand, mosquitoes are known to cause millions of deaths each year.

In the line of scientific duty, Pereira has even allowed bed bugs to feed on him. It’s very hard to start a colony of bed bugs in the lab by artificially feeding a few insects, he says. So he, quite literally, offered up some of his own blood. “I just put a jar of bed bugs on my arm or leg and let them feed for a while,” he says.

Where they come from

Bed bugs have been with humans since we lived in caves. And that’s where many scientists think the critters originated. Bats live seasonally in caves, and as the animal hangs upside down to nap, the bed bugs feed on their blood. In between meals, the bumpy, crevasse-filled walls of caves are great hideouts for the bugs. When no bats were around, the insects would go into a state of dormancy. Bed bugs still have this superpower: they can go up to two years in a state of dormancy without feeding, waking up when there are delicious blood-filled humans around.

When humans moved into the bats’ caves, ancient bed bugs suddenly had an all-year-round supply of food that didn’t have thick, hard-to-navigate fur like bats do. When early humans left caves, they brought bed bugs along with them. They thrived in human dwellings, that had warmth, protection from the elements, and, like caves, lots of places to hide. Thus began their evolution into the pests we know today.

Just like modern times, bed bugs of the Middle Paleolithic era–when early Homo Sapiens dwelled in caves and the first evidence of genetic differentiation in bed bugs has been found—could affect anybody, regardless of their wealth. But poverty and the lack of resources that came with it meant the invaders have always been particularly bad for people with limited financial resources. One 1500s source wrote of bed bugs, “They do not breed in beds of which the linen and straw is frequently changed, as in the houses of the rich.”

Once they made the jump to humans they never looked back. Bed bugs are now quite specialized to live alongside us, says Zachary DeVries, a postdoctoral researcher who studies urban entomology at North Carolina University. Their feet no longer have sticky pads that allow them to walk on cave walls, which is part of the reason why they like beds and other upholstered furniture so much: the texture of the woven cloth is easy to climb. They also don’t really like to get through all that fur to our pets’ skins, which means they rarely feed on dogs or cats—although they can hitchhike on them, according to the American Veterinary Association.

Until the mid-twentieth century, bed bugs were everywhere we were in North America, when they abruptly disappeared. Nobody knows exactly why, but researchers suspect it probably had to do with changes in the ways people lived and the kinds of chemicals they used. Theories abound about why bed bugs have made a triumphant return, and the answer is probably a combination of factors. Everything from frequent travel to a reduction in the use of certain kinds of pesticides may have helped bring bed bugs back.

Almost unheard of in North America of 25 years ago, today the common bed bug (Cimex lectularius) can be found in hotel rooms, transit systems, and homes near you. “Today, they occur everywhere,” says Pereira. In the early 2000s, suddenly bed bugs were everywhere and pest control companies didn’t really know what to do about it. But now, the good news is “there are ways to deal with [an infestation],” says Pereira.

What to do about them

If you think you have bed bugs, don’t panic. Horror stories aside, pest control methods have gotten a lot better since their resurgence in the early 2000s. First, contact pest control experts. If you’re not sure who to call, DeVries suggests reaching out to the extension office of your local state university. “You can get advice from them about who are reputable companies who do good work,” he says.

Some people try to tackle a bed bug infestation on their own, but DeVries cautions against this. “I’ve talked to people who have done it on their own, but it is labor intensive and it is tricky,” he says. If you miss a single fertile female or a few tiny eggs, the whole problem starts all over again.

Instead, he suggests looking for a company that practices what’s known as Integrated Pest Management, rather than just spraying insecticide. “With bed bugs you’ve got to use multiple tactics,” De Vries says. That means insecticides, but also other treatments like a mattress encasement, traps, or heat treatments. Follow the specific protocol your pest treatment company suggests.

The trick, no matter what, is to remain as calm as possible. If humans all through history could handle this, you can too.