Zoos and aquariums are letting their animals go on adventures during the shutdown. But should they?

Sloths hanging with dolphins, penguins chilling with whales—for the right individual, reality can be as cute as the photos. 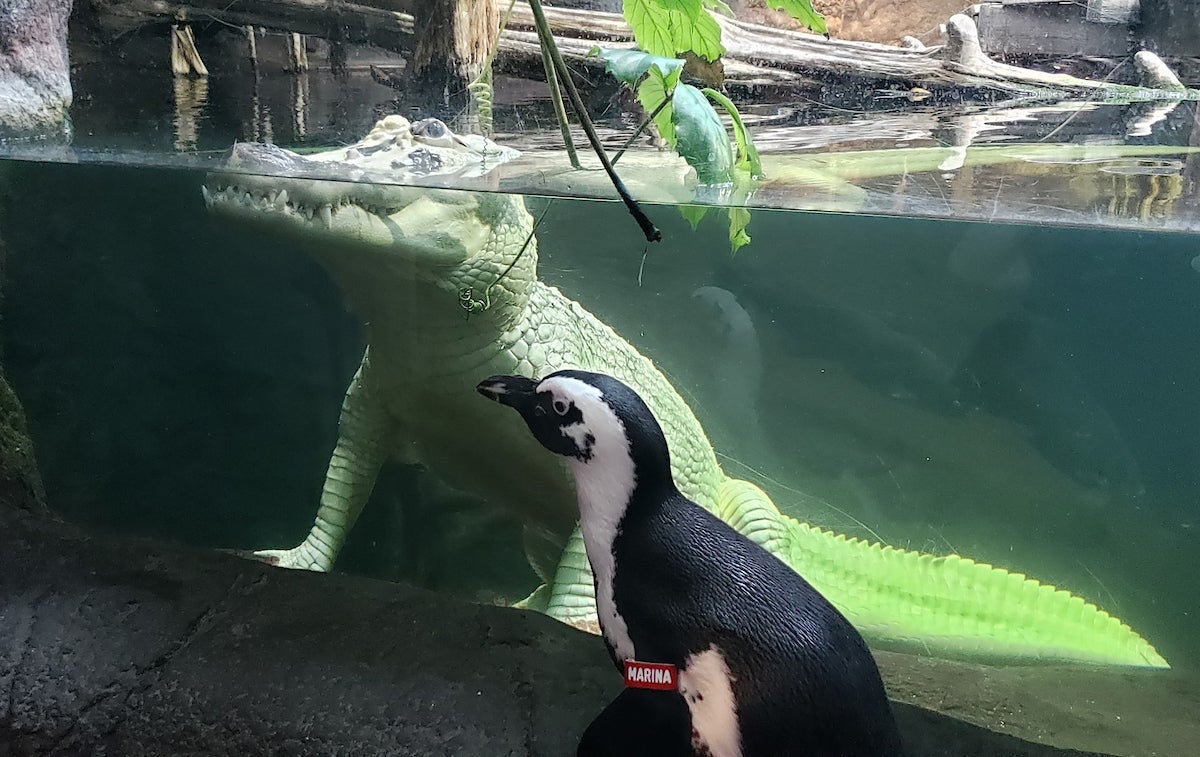 What do you get when a tegu lizard, a penguin, and a sloth walk into an aquarium? Some very precious photo ops. Due to to COVID-19, creatures in captivity have a lot more alone time; so, zoos and aquariums have taken it upon themselves to provide little field trips for their residents.

That means beluga whales can have staring contests with penguins in Chicago, a sloth can chum around with dolphins in Texas, rescue puppies can discover the deep sea in Georgia, and gorillas can experience the crankiness of llamas in Canada. These meet-and-greets don’t just add delight to people’s social media feeds—they also give the wildlife involved a break from the monotony.

“These experiences could be enriching for the animals by exposing them to unique objects, smells, sounds, etc.,” Josh Plotnik, an animal behavior expert at Hunter College in New York City, says. “Zoos often focus on providing enrichment for animals to prevent boredom, reduce stereotypical behavior, and to increase cognitive stimulation.”

For relatively friendly and curious critters, these adventures offer a dose of entertainment when there aren’t any visitors around. Similar to humans, animals can grow tired of the same scenery and routines, especially when they have fewer strangers to interact with. In the wild, they can wander about and bump into other species, but in a zoo or aquarium, their circles are limited to keepers and whoever’s next to them in confinement.

Of course, it’s important to note that we can’t read animal minds, so there’s no way to know what they’re feeling or processing sensory-wise. It’s also essential that we don’t anthropomorphize the little guys: Animal behavior is complex and doesn’t always come across in the way we’d expect.

Research has shown, though, that zoo and aquarium enrichment does have concrete benefits. Whether it’s in the form of amenities like pools or lakes, tasks that make individuals to “work” for their food, or even walks around the property, it provides outlets for these animals to be their natural selves. If creatures remain idle for too long, they can suffer from cognitive decline and start showing repetitive behaviors, including pacing, neck twisting, over-grooming, or biting on bars. Wandering around other exhibits can provide them with a little physical and mental stimulation. It can also help fend off boredom in the animals behind the glass, who for logistical reasons, can’t be taken out.

But even if these interactions are largely positive, it doesn’t mean every animal will enjoy visiting other members of its kingdom. Even with a normally adventurous species, some individuals might be “neophobic,” Plotnik says, meaning they’re easily freaked out by new sights and surroundings.

The key to a safe interaction in this case would be to keep an eye out for what the animal does when they make it to the rendezvous point. Are the penguins waddling enthusiastically, or hiding in the corner? Is a puppy bounding around playfully, or moping about?

Another big part of the meet-and-greets is knowing who to introduce to each other. Out in the wild, interspecies relationships can get hairy, especially when they span different parts of the food chain. Some visitors could look like a snack for the animals behind the glass.

Take the charismatic African penguin, for instance. The bird might be cool with getting up close and personal with an American alligator because it won’t necessarily even register what it is, says Bonnie Beaver, a veterinarian and behavior scientist at Texas A&M University. But the same might not ring true if the wee feather ball locks eyes with a seal or shark.

In that same line of thinking, it’s probably not wise to take a carnivorous animal on a walk around the zoo, Beaver says. Controlling a big bear or lion is no simple task, and giving them open views (and sniffs) of potential prey items would only frustrate the individuals, she explains.

But for the right animal with the proper disposition, zoo and aquarium trips are like a vacation to an exciting new place. Imagine your first time leaving your hometown to visit the big city, or your first spin on a Disney World ride, or even your first encounter with an elephant or giraffe.

Not every individual of a species loves an adventure, but for the ones that do, “it’s good for the animal mind and welfare, which makes it good for us,” Beaver says. And since vacations are pretty much out of the question for humans right now, we might as well live vicariously through our winged, scaled, and furry counterparts.