Ask Anything: Would Cannibalism Make You Fat?

Short answer: It all comes down to portion control. 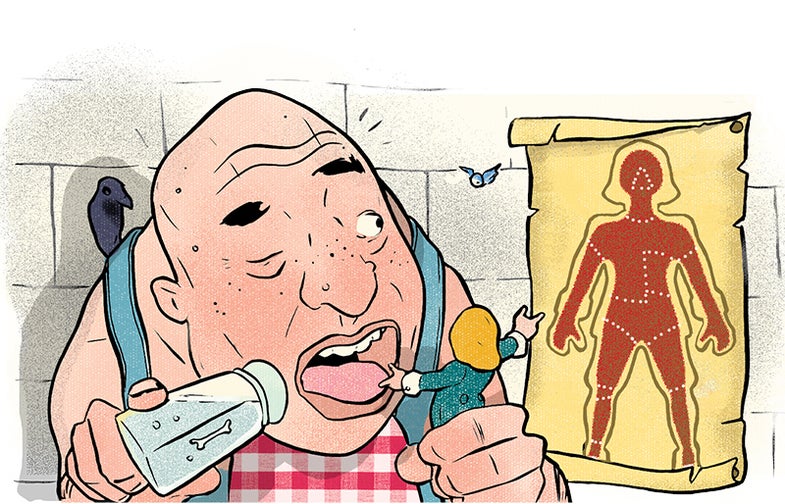 Taken as a whole, a cooked cadaver would yield about 81,500 calories’ worth of food, says James Cole, a lecturer on human origins at the University of Brighton in England. But that’s only if you wolfed down every part that could be consumed. To create his “nutritional template” for cannibalism, Cole used body-composition data published in the 1940s and ’50s, drawn from four dead males between the ages of 35 and 65. From these he built something like a beef chart for human beings, with caloric content listed for every cut of person-meat.

A human arm would supply about 1,800 calories, for example, while each leg would yield 7,150 calories.

Cole determined that a human arm would supply about 1,800 calories, for example, while each leg would yield 7,150 calories. The lungs, liver, and alimentary canal each provide roughly 1,500 calories, while the brain, spinal cord, and nerve trunks together account for 2,700. And what lurks in the hearts of men? Seven hundred twenty-two calories, Cole says.

Archaeologists might use the nutritional template to help settle some tricky research questions. We know that some groups of early hominins engaged in cannibalistic behavior, but it’s hard to know whether they did so for ritual and social reasons (so-called cultural cannibalism) or as an occasional source of nutrients (gastronomic cannibalism). In a cave site east of Burgos, Spain, where Homo antecessor lived one million years ago, researchers have found cut-marks on hominin bones that suggest the latter. The marks look identical to those found on the bones of animals consumed as food. Cole hopes that his work could further help distinguish these behaviors. For example, researchers might check to see if H. antecessor‘s cut-marks deliberately targeted the most nutritious body parts.

The 81,500 calories in a human body may sound like a lot, but it’s paltry next to what’s found in bigger animals. A horse contains more than 200,000 calories, and a bear three times that much. And that’s just from their most appetizing parts. It’s also worth considering that about half the calories in human meat come from adipose tissue. Consuming so much fat might pose problems of its own. “I’m not a nutritionist,” says Cole, “but I would imagine that it would not be very healthy.”