Cow farts are an even bigger problem than we thought 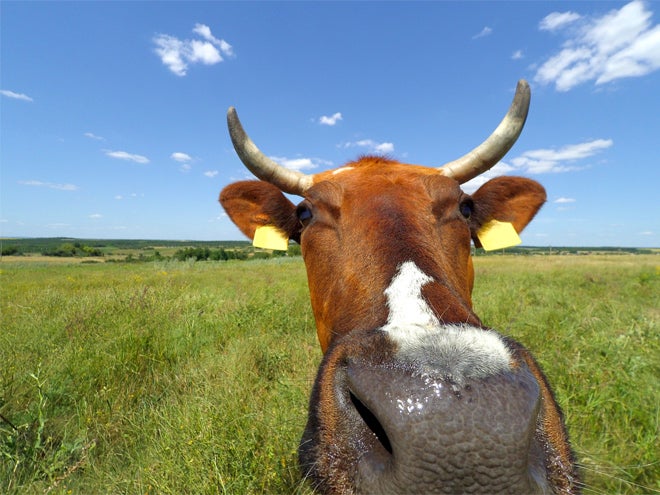 Climate change just isn’t that funny. Cow belches, conversely, are hilarious. It’s the rare issue that’s seriously impactful and giggle-inducing—bovine flatulence is a precious, smelly diamond in the climate change rough. And it turns out to be an even bigger problem than we thought.

A new estimate of the global methane emissions from cow mouths and butts is 11 percent higher than previous stats suggested. The study was funded by NASA’s Carbon Monitoring System program, and published in the journal Carbon Balance and Management. Fortunately, it seems that the U.S. estimates are still on track. It was mainly the global numbers that varied.

That may seem like a tiny amount to be off by, but the dose makes the poison—and boy is there a lot of poison billowing into our atmosphere. This updated estimate says that livestock pushed about 119.1 million tons of methane into the air in 2011 alone. Carbon dioxide emissions are far greater in terms of volume, but because methane captures more of the sun’s energy, it’s actually a more potent greenhouse gas. And underestimating emissions means we also underestimate how much we need to do to combat climate change.

The problem with methane estimates is that they’re just that: estimates. No one from the EPA is standing out in a pasture measuring how much gas comes out of each individual cow. Our estimates are based on data, but scientists have to make certain assumptions in scaling that data up to account for every bovine. And it’s not just “how much methane does the average cow emit in a day?” It’s also how big the average dairy cow is, how much each animal eats, how much dairy and feed cattle differ in size, how their manure is handled, and so on. There aren’t universal guidelines for these things, so climatologists have to build models. When those models are based on outdated information, they’re bound to be inaccurate.

That’s what happened with the global methane emissions data. The 2006 estimates were based on a different rate of change, because post-2006 the rate of methane production shot way up. Plus, the way we raise cows has evolved. Today’s bovines are larger, for example, which means they consume more feed and pump out more gas.

American and Canadian cows have somehow managed to produce increasing amounts of methane, despite their decreasing numbers. One possible explanation? How we handle their poop. Manure also emits methane, so in Europe they handle cow feces in a way that minimizes further gas leakage. North American companies prefer to centralize their manure processing for economic efficiency, but in the process they’re also putting more methane into the air.

Europe has begun to decrease their agricultural methane production, but the rest of the world seems to only be getting worse.

Scientists from many disciplines are trying to figure out creative ways to keep cows from belching out so many greenhouse gases, but they’re not exactly close to implementing it industry-wide. Sure, we can feed garlic to cows and tweak their microbiomes to prevent methane formation in the gut. But those changes will take a long time to really have any effect. And in the meantime, we’re clouding our atmosphere with massive quantities of cow belches.

Of course, we could always just give up red meat. Our consumption has decreased over time, but come on…convincing the majority of the American public to drastically decrease their steak intake? Unlikely. A marbled ribeye is just too enticing. Maybe for one month (#NoRedOctober) or on one day of the week, but not all the time forever.

Still, little changes like that across an entire population can have an impact, and there’s no reason not to do it. The siren song of delicious cow meat can be hard to resist. But if you want to motivate yourself to cut down on your weekly burger intake, try to remember how many farts had to fill the air to create that juicy ground beef.