OSIRIS-REx will launch tomorrow, possibly with my germs onboard 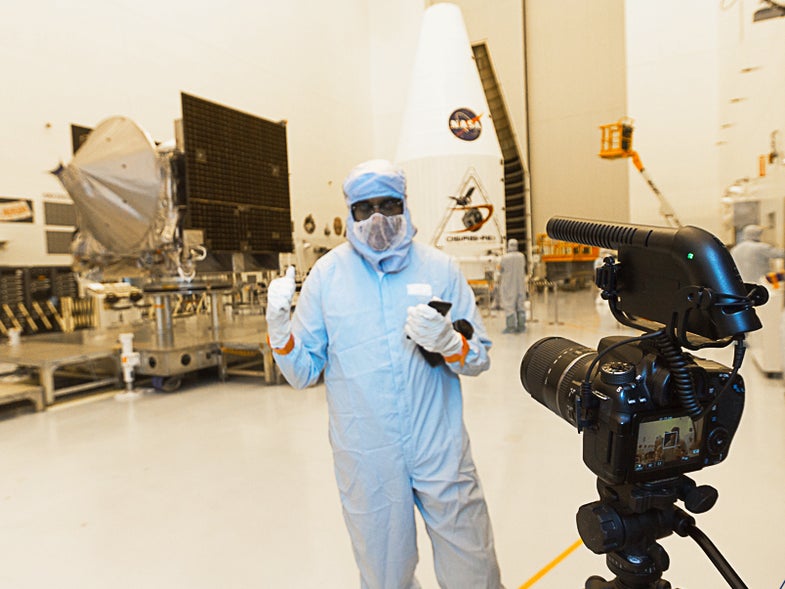 I now have an irrational fear of nylon, thanks to NASA. Or rather, a fear of completely screwing up a groundbreaking mission that’s about to launch to intercept a small but potentially hazardous asteroid.

In August, NASA invited me and a few other reporters to get a last look at the OSIRIS-REx spacecraft before it embarks on its 1.2 billion mile journey to the asteroid Bennu. In the days leading up to the visit in the clean room at Kennedy Space Center, the space agency dropped quite a few warnings into my inbox about nylon–of which, I’ll admit, my knowledge does not extend far beyond seeing it written on my clothing tags.

NO NYLON! NASA insisted again and again. Ok, we get it, but why? Well, on September 8, OSIRIS-REx will launch to Bennu in search of amino acids—the building blocks of life. And it needs to bring back a “pristine sample” of the asteroid’s regolith for scientists on Earth to study.

But what does this have to do with my Target-bought Simpsons-themed boxer shorts? It’s simple: Things like nylon, hair, natural rubber, silk and latex have the potential to contain amino acids and must be “encapsulated, covered or left out of the clean room entirely.” Fair enough. But these fabrics are found in everything from pantyhose to backpacks and toothbrushes. 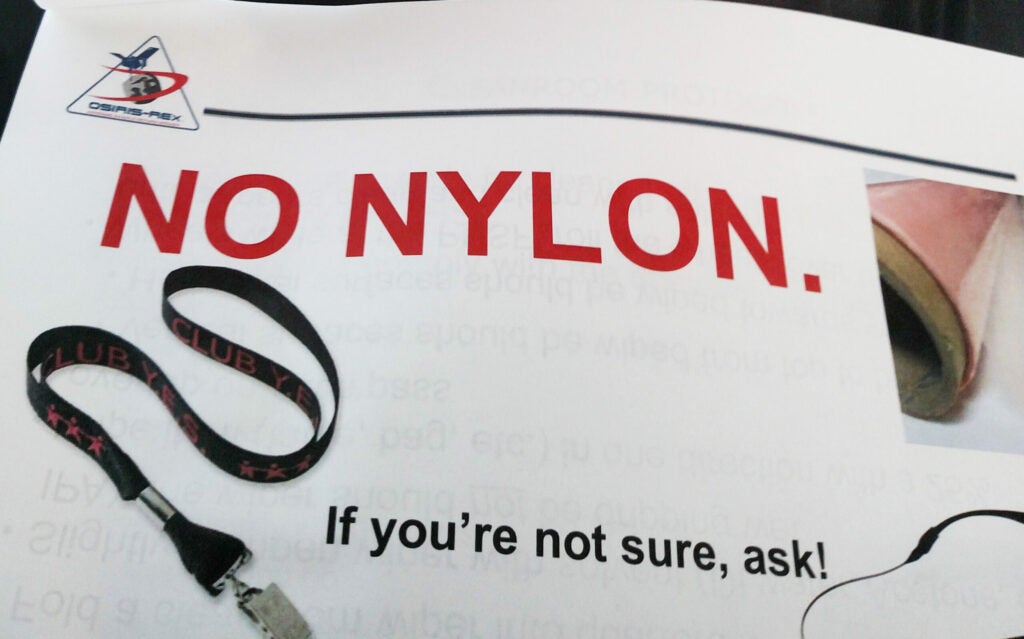 The fifth time NASA warned us about Nylon

So what’s at stake here? What if our clothes were mislabeled? Then a mission costing close to a billion dollars to a deep space destination that happens to be a relatively tiny rock hurtling through the solar system could potentially be for nothing. Maybe I should just stay home, I thought. I’m an awkward klutz and a visit to the Payload Hazardous Servicing Facility could potentially turn into an episode of The Office, with Michael Scott-type hijinks.

OSIRIS-REx will take off tomorrow for a ridiculously long trip that will span two years before it meets up with the carbon-rich target, Bennu. It will then spend 505 days mapping the surface and finding a sweet spot to collect that sample. The spacecraft will have 5 seconds to grab about 60 grams of material. Then, it will begin the trip home for arrival in 2023. At this point, you’re probably wondering the same thing I did: Why is NASA letting me near this spacecraft at all?

“The really big critical thing is the fact that this is a primitive body and it preserves material from over 4.5 billion years ago—the beginning of our solar system. We believe there’s organic molecules,” says Christina Richey, Deputy Program Scientist at NASA. “Those organic molecules are the precursor to life in our solar system, including, potentially, the precursor to life formed here on Earth.”

So yeah, NO PRESSURE AT ALL. Did I mention that researchers also intend to study Bennu’s potential for a catastrophic impact with Earth?

NASA, you really need to rethink this whole spacecraft-visiting thing. As a neurotic, lifelong New Yorker, I’ve already maxed out my levels of anxiety. Or so I thought. The night before I headed over to Kennedy Space Center, I did what any 30-year-old guy would do when frightened that his personal fashion choices could undo a 7-year deep space mission and potentially destroy the Earth (but not really): I called my mom, the original Google.

After confirming that my clothing did not contain any nylon and that my shoes were the furthest from real leather that one could get, I shaved and left to visit OSIRIS-REx.

Although OSIRIS-REx appears to be as clean as a whistle, NASA fights a constant battle against contamination. Fortunately for klutzy reporters, the spacecraft has components to measure any potential contamination before heading to Bennu.

“For the spacecraft itself, we have witness plates on board to collect the contamination environment of the clean room, of the spacecraft re-entry, and curation to compare that to the sample,” NASA Goddard Program Scientist Jason Dworkin said in a short briefing before suiting up.

“We have even collected material from the spacecraft and clean room to archive, to allow future scientists to study those in parallel with the samples when they come back. They can truly understand if they see an exciting compound, even one we didn’t know to restrict today.”

Dworkin joked (I hope) that our stuff or even our selves could be catalogued and stored at a NASA facility if there are any hiccups in the clean room.

In The Clean Room

On visiting day, myself and a few other reporters were bussed over to the clean room facility and started the stringent decontamination process. This is where I would meet a wonderful lady who caught on immediately that I was riding the hot mess express. We’ll call her Mom 2. She dressed me. Yes, literally. Before even entering the locker room area we had to stick our feet into a machine that scrubbed our shoes. I held up the line of course and needed assistance. NASA staffers helped me put on a set of booties.

Now into the changing area, Mom 2 waited with one-piece gowns and sized me up as soon as we entered. First the headpiece was placed over my head and a mouth guard over my face. I put on the one-piece suit all by myself and was proud of it. Mom 2 helped me get on a set of gloves and used red tape to seal everything shut. The suit fit, mostly. We placed our phones and cameras on a table to be cleaned.

Before entering the same room as the spacecraft, we were required to walk through one of those rooms you see in sci-fi movies about recovered alien bodies and mutated viruses. You stand in there for a few moments while tiny holes in the wall blow a burst of air at you. Not sure how this helps, but I’ll take NASA’s word for it.

The clean room glowed with an intense orange hue, making it nearly impossible for photographers to get a decent shot. The spacecraft stood in the middle of the facility looking no larger than a Volkswagen Beetle. A few yards away stood the Atlas V rocket fairing, which the spacecraft will be loaded into and placed on top of the rocket for launch.

The Payload Hazardous Servicing Facility, like all other facilities at Kennedy Space Center, houses the most advanced technology available to mankind, but also scatterings of computers and equipment that seem to have been sitting around for a few decades.

It was hot in there. Real hot. As a person who sweats under normal conditions, this was even worse. Regardless, I stood there among a few others who I assume also had Aerosmith’s ‘I Don’t Want to Miss a Thing’ playing in their heads. In my limited encounter with OSIRIS-Rex, I aimed to see the TAGSAM device–the arm with a seemingly impossible task of grabbing the asteroid sample in a window of 5 seconds. Even Bruce Willis had more time than that.

In the image below, you can just barely see the folded arm cutting up across the center of the spacecraft’s body, and next to the forearm of the TAGSAM device, three small nitrogen tanks wrapped in black Mylar. The arm only needs one burst of gas to shakeup the regolith for capture, but there are two extra tanks just in case.

To keep the sample pristine, an octagon-shaped panel shields the container where the sample will be held–mainly from the bigger burns during engine-guided maneuvering. Those tiny thrusters are fixed to the bottom of the spacecraft with their ‘remove before flight’ tags.

So did I contaminate OSIRIS-REx during my visit? I don’t think so. Given the incredible work that’s gone into the design and its redundancies, the spacecraft was more than amply protected against my bumbling awkwardness. Still, when the sample lands in the Utah desert in 2023, I’ll be at an undisclosed location awaiting confirmation from NASA that the sample was uncontaminated.