How The Juno Spacecraft Will Survive Jupiter’s Devastating Radiation

It starts orbiting the deadly planet in July 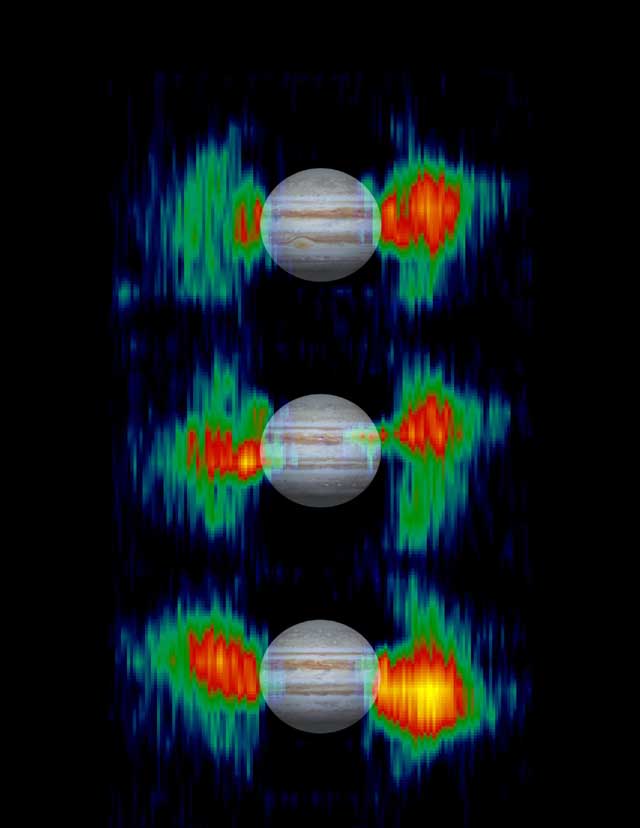 Mighty Jupiter is incomprehensibly large. More massive than all the other planets and asteroids in the solar system combined, Jupiter is the size of 1,300 Earths. As if such a big guy needed any additional protection, Jupiter is also swathed in radiation that’s many thousands of times harsher than around Earth.

“Jupiter is by far the most severe radiation environment of any body in the solar system, other than the Sun,” says Kevin Rudolph, an engineer at Lockheed Martin who helped design and build the Juno spacecraft.

The Juno spacecraft will arrive at Jupiter on July 4 and orbit it for two years. How will Juno survive such blistering radiation? “We’re basically an armored tank,” says Juno principle investigator Scott Bolton. “This mission is a first for NASA in many ways. It’s probably one of the biggest challenges they’ve attempted, to get this close to Jupiter.”

Where Does The Radiation Come From?

Jupiter’s large metal core gives it a magnetic field 20,000 times larger than Earth’s. And just like Earth’s magnetic field, the Jovian magnetosphere traps the electrically charged particles that stream out from the sun.

The particles in the magnetosphere build up over time, and many become more dangerous. As the planet spins, the Jovian magnetic field whips around, too, accelerating all those charged protons and electrons that got caught in the magnetic net. They also take on more energy as they crash into other.

“You end up with essentially BBs,” says Rudolph. But they’re sub-atomic, so they can pass through a spacecraft’s solid hull and spell trouble for a spacecraft’s electronics.

“Those BB-like particles will fly into an electronic circuit and knock the atoms off the chip, or knock the electrons in the circuitry out of position. If they knock enough out, it can destroy the circuit.”

The first step to making sure Juno’s circuitry doesn’t get taken apart by radiation is to limit its exposure.

Jupiter’s worst radiation is concentrated around its equatorial regions, so Juno’s elliptical orbit will make sure it flies through those areas as little as possible.

“The orbits that we have go far away from Jupiter over most of the orbit,” says Rudolph, “and when they come in close, they dive quickly through the intense part, then fly below the radiation and go back out quickly.”

“We thread a needle,” says Bolton. “By going over the poles we’re able to drop down in a small gap between the atmosphere and these intense radiation belts.”

Lockheed Martin based Juno’s design on the Mars Reconnaissance Orbiter. But radiation levels around Mars are much lower than at Jupiter, so the Juno team had to make some adaptations.

The engineers wrapped many of the components of Juno’s avionics systems in a thin layer of lead shielding, which is dense enough that the particles have trouble penetrating.

They also made some of the electronic parts larger, to lessen the impact of each radiation hit. For example, Rudolph says, if a transistor only has five atoms in it and radiation knocks away one of those atoms, then it would have lost 20 percent of its functionality. But if the transistor has 500 atoms in it, than a radiation hit only knocks out 0.2 percent of it.

This kind of radiation hardening makes the spacecraft able to survive a radiation dose of 50,000 rems. But that’s still a far cry from the 20 million rems that Juno will be exposed to over its lifetime. To make it even hardier, they needed to build a special box.

Most of Juno’s electronics are secreted away inside a cube that measures about 3 feet on each side. The “vault” is made built from half-inch-thick titanium that will stop or slow down those fast-moving charged particles before they can smash into Juno’s delicate parts.

Of course, Juno’s solar panels and cameras won’t do much good if they’re locked inside a dark box. Those and other sensors are left outside the vault, with cables connecting them to the circuitry inside the vault.

Those external parts have added protections. For example, the camera that looks at the stars to help the spacecraft orient itself is wrapped in an inch-thick canister, with just one end open.

The solar panel arrays have a 12-millimeter-thick sheet of glass over the top. The glass lets in light so the solar panels can do their jobs, but it also provides a small amount of protection against radiation and damaging dust particles.

To see how radiation would affect Juno’s solar panels, engineers put the cells in what Rudolph describes as a “hot dog”-shaped chamber that fires electrons at the cells.

Those experiments showed that the solar cells would lose 10 to 15 percent of their output over the life of the mission. So to compensate, the team just made the panels 10 to 15 percent bigger. That way, Juno will still have enough power to take photos and measurements even when its near the end of its mission.

Overall, Juno is designed to take twice as much radiation than scientists expect it to have to deal with. Its total radiation tolerance of 40 million rems gives a little room for error, in case the radiation levels are higher than expected, and should also leave open the possibility for a mission extension beyond November 2018.

Paving The Way To Europa

Juno’s radiation-protected sensors show us Jupiter in greater detail than ever before. The mission could help to uncover how Jupiter formed, in turn shedding light on how the solar system, and maybe even life itself, came to be.

NASA is also seriously considering a mission to Jupiter’s moon Europa, which scientists consider to be one of the most likely spots to find alien life in our solar system. Because Europa orbits in Jupiter’s severe radiation belt, Juno’s design could help shape the spacecraft that eventually go there.

“Europa’s radiation dose is much worse than the dose that we’re getting from Jupiter,” says Rudolph. “They’re going to have to come up with some nifty stuff, and I’m sure NASA will take lessons from this mission.”