These dust particles and rocks could hold the secret to the beginning of life on Earth. 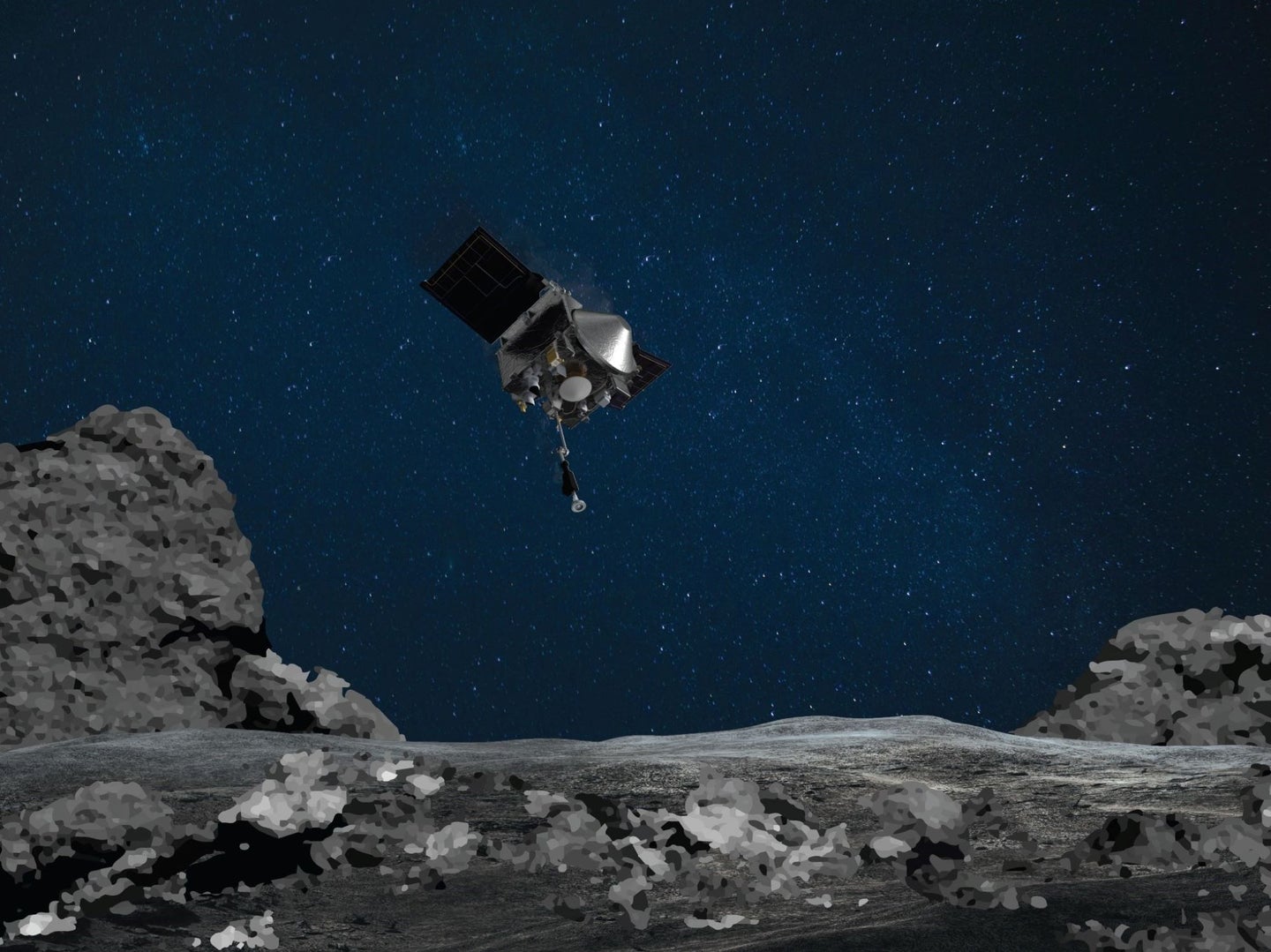 NASA's OSIRIS-REx spacecraft is all set to collect a sample from the asteroid Bennu. NASA
SHARE

Four years ago, NASA launched its OSIRIS-REx spacecraft from Cape Canaveral. Two years ago, the spacecraft finally reached its target of the carbon-rich, Earth-adjacent asteroid Bennu. Today, OSIRIS-REx (the Origins, Spectral Interpretation, Resource Identification, Security-Regolith Explorer) will fulfill its original mission and collect a rock and dust sample of at least two ounces from the asteroid—the largest sample of its kind ever collected.

The mission has been no easy feat for the NASA engineers involved. The engineers selected Bennu out of 500,000 potential asteroids in the Solar System because of its proximity to the Earth, relatively slow rotation, carbon-heavy chemical composition, and large diameter of approximately 500 meters. After selecting the asteroid, the engineers charted a course for the craft and, roughly two years after the launch in September of 2016, it began to orbit the asteroid. For the past two years, OSIRIS-REx has been in orbit, taking photographs and 3D scans of the asteroid’s surface to measure its temperature, rock mineral content, and x-ray emissions. Bennu is the smallest object that any NASA spacecraft has ever orbited.

The sample collected today could hold important information that will allow scientists to better understand the origins of life on Earth. The sample might also be used for more practical purposes, like determining whether it’s possible to use the material that comprises asteroids like Bennu to sustain human life on Mars or other planets. When the spacecraft finally returns the sample to Earth in 2023, it will be studied extensively for years to come.

OSIRIS-REx will use a robotic arm called TAGSAM (Touch and Go Sample Acquisition Mechanism) to grab a fistful of loose dust and rock called regolith from the surface of the asteroid without ever actually landing. The spacecraft has plenty of time and enough fuel for three attempts at collecting a sample from the asteroid.

“It’s a very safe way (if such a thing exists) to retrieve a sample from an asteroid,” Rich Kuhns, Lockheed Martin’s OSIRIS-REx project manager, told Popular Science before the initial launch of the spacecraft in 2016. “Since you just have to be in contact with the asteroid, the technology allows us to collect our sample in only 3 to 5 seconds.”

However, the collection mission isn’t so simple as OSIRIS-REx just reaching out from its orbit and grabbing a bunch of rock. The collection site is hazardous, and NASA engineers will be issuing instructions to the spacecraft from Earth, which it will carry out autonomously. The craft is also designed with these hazards in mind and will perform several automatic functions to ensure that the mission is successful.

“The solar panels will pull back safely away so they can’t touch Bennu’s surface,” said Roger Harris, who served as Project Manager for OSIRIS-REx work at IV&V, in a NASA post. “The Natural Feature Tracking system will enable the spacecraft to pull back before the spacecraft is in danger of colliding with a hazardous area of the ‘Nightingale’ landing site, which while our best option for gathering surface material, is surrounded by massive mission-ending boulders.”

You can watch live coverage of the mission tonight starting at 5pm EDT. If all goes well and the sample is collected by OSIRIS-REx without a hitch, the spacecraft will still have quite a long way to go before it’s received at home. Because of differences in orbital alignments, it will not begin its return journey until 2021. Then, the spacecraft should travel home and touch down in Utah with its sample in 2023.