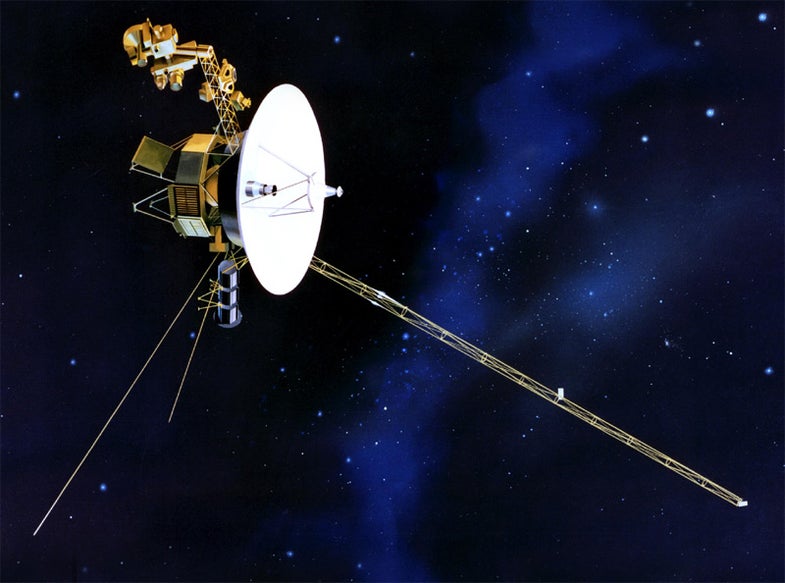 Most of the messages posted to social media are, in a word, garbage.

But while we are all in the gutter, some of us are tweeting at the stars. And Tuesday August 15 marks the end of a seriously stellar opportunity: until 11:59 pm PDT, you can send missives to NASA that might actually make it out into interstellar space.

It’s all in honor of the Voyager mission. Forty years ago, Voyager 1 and 2 hurtled away from Earth. Their primary missions had them studying Jupiter and Saturn. Today, they’re the longest running spacecraft in deep space, and they’re getting farther away every second. Voyager 1 finally made it to interstellar space—the boundary beyond which the sun’s magnetic field ceases to influence everything around it—in August of 2012. There’s no two ways about it: this little space robot is farther from home than any of our creations has ever ventured.

Voyager 1 carries all of our hopes for humanity’s future in the cosmos. A tiny American flag is tucked safe inside its thermal blankets. The famous Golden Record preserves snippets of our global culture, ostensibly for some alien race to listen to one day (considering the fact that they’d have to figure out how records are supposed to be played, it’s safe to say this is more of a symbolic gesture than anything else). The spacecraft is even responsible for one of the most awe-inspiring photos of Earth ever taken—the “Pale Blue Dot”. Taken 4 billion miles away from home, the shot moved physicist Carl Sagan to make this poetic observation: “Everyone you love, everyone you know, everyone you ever heard of, every human being who ever was, lived out their lives…On a mote of dust suspended in a sunbeam.

And all sentimentality and superlatives aside, the spacecraft has been responsible for quite a few scientific discoveries, too. In short: it’s a mission worth celebrating, so get those tweets out while you can.

Messages must be 60 characters or less (sorry, no GIFs) and carry the tag #MessageToVoyager. You can post your messages to Twitter, Facebook, Tumblr, Instagram, or Google+. Only one is getting beamed out to Voyager 1, so the competition should be pretty stiff:

All of us are behind you, and ahead of you is everything. #MessageToVoyager

"There never was a good war or a bad peace." – B. Franklin • Our #MessageToVoyager submission is one of Benjamin Franklin’s most famous quotations from his Letter to Josiah Quincy, penned in 1783. In honor of the 40th anniversary of @NASA’s Voyager mission, you can submit your own message through the end of the day today, August 15, 2017 for consideration to be sent more than 12 billion miles through space. Find out how at http://jpl.nasa.gov/ • #Voyager #Voyager40 #MessageToVoyager #NASA #Space #Science #FranklinInstitute #BenjaminFranklin #Franklin • James Earle Fraser (American, 1878-1953) | Benjamin Franklin Memorial | 1938 | The Franklin Institute, Philadelphia

Unsurprisingly, the call for submissions has also yielded some…less sincere results (which are also fantastic).

The flat earth society has members all around the globe #MessageToVoyager

(And yes, about a bajillion people have tweeted “send nudes.”)

After NASA closes submissions at 11:59 pm PDT, the Voyager team will pick a few of their favorite candidates. Then, and only then, will the public get to weigh in—presumably to avoid a Boaty McBoatface scenario. Public voting will open on August 23 and close six days later, and the message should arrive in interstellar space—in the vicinity of Voyager 1, 13 billion miles away—on September 6.

So hurry up and compose your perfect (sub-60-character) message to the galaxy. We can pretty much promise that aliens are never going to read it, but you’ll have the best ice breaker on the planet for the rest of your life.