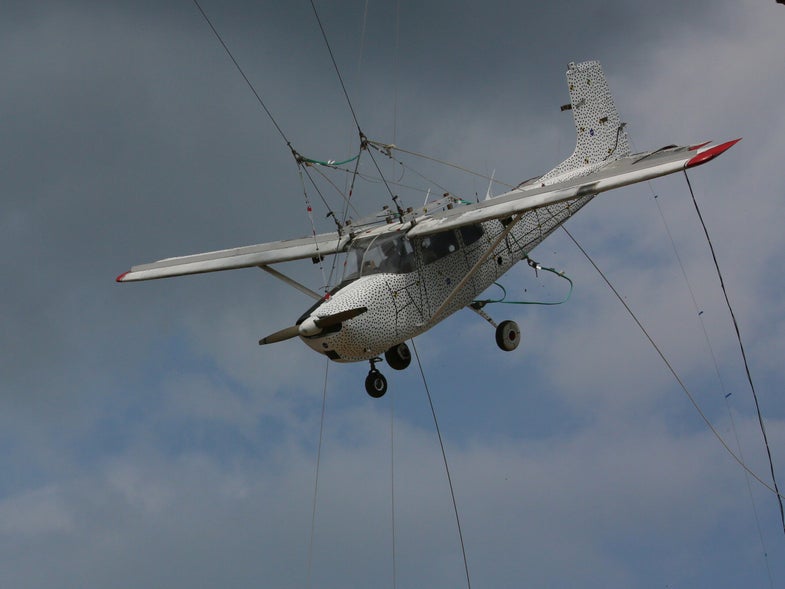 Yesterday, in Hampton, Virginia, about three hours south of Washington, DC, NASA researchers slung a plane into a harness and then sent it crashing into the ground. The researchers were specifically testing Emergency Locator Transmitters, which notify rescuers in the event of a crash. And what a crash they got!

Here’s the crash in .gif form:

Again, slower and from the other side:

This test was the second of three. In the first, the airplane was at a lower height and crashed onto cement, which tested the plane’s impact and meant the plane skidded forward somewhat. For this test, the plane hit sand and ate dirt. Soil, it turns out, is really good at absorbing high-energy impacts, which is bad news for the crash test dummy pilots, who were forcefully jostled about as the plane slammed into the ground. In a real life crash like this, it’s likely the people onboard the plane would need immediate medical attention–on account of all the limbs they broke.

The test was successful, in that the plane broke and the emergency locator transmitters on board blasted the plane’s location. When NASA has finished the third round of testing, the information gained from all three will enable them to recommend better ways and places to install the transmitters on planes.

Watch the full crash, over and over again from many angles, below: