Tumbling ‘Hedgehog’ Robot Will Roll Around On A Comet

Unlike the Philae lander, this one bounces around on purpose 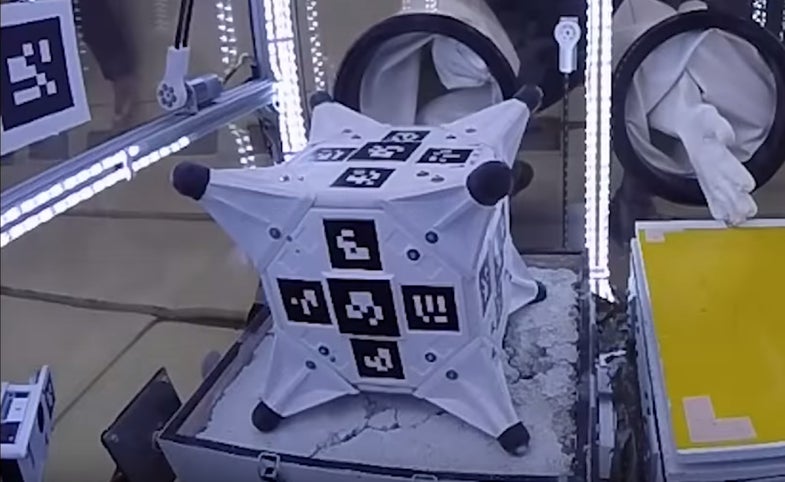 This year, mankind landed softly on a comet for the first time ever. Things didn’t go quite as planned—the Philae lander wasn’t able to secure itself to the surface of the comet—but the mission has still managed to return a wealth of information. Now scientists want to take it one step further by not only landing on a comet, but roving around all over it.

Frozen, icy comets provide a window into the earliest history of our solar system. But they’re also really difficult to maneuver around on. They have rugged surfaces and minuscule gravity—most comets are less than 6 miles in diameter, so an SUV-sized rover such as Curiosity would only weigh a few pounds there. Lightweight, wheeled rovers could easily flip over or get trapped a sinkhole.

That’s why we’re going to need different kinds of robots to explore comets. Hedgehog is one possible solution that’s being developed by NASA’s Jet Propulsion Lab, Stanford University, and MIT.

This spikey cube doesn’t have a top or a bottom. It contains three flywheels that spin up really fast, then brake suddenly to send it hopping or tumbling in any direction—similar to Sonic the Hedgehog. “By controlling how you brake the flywheels, you can adjust Hedgehog’s hopping angle,” said Stanford’s Marco Pavone in a press release.

Pavone and his colleagues think that Hedgehog could someday roll around a comet’s surface carrying cameras and spectrometers to measure its properties. Since the spacecraft is relatively small and low-cost, NASA could potentially send several to one comet to explore different regions at the same time.

Across 180 parabolic flights, Hedgehog has proven its ability to get around in low gravity and in a variety of different simulated terrains—rocky, icy, and the soft and sandy terrain that got the better of the Philae lander.

So far there’s no specific plan to include Hedgehog on a future mission—it’s still in development with funding from NASA.