Why are the Japanese so far ahead of us in certain important areas? 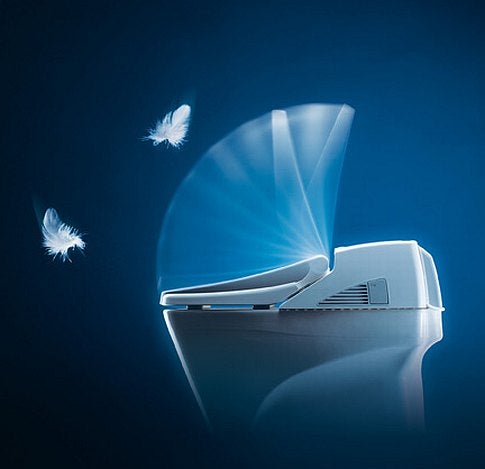 Remember the last time you had one hand Twittering away on your Blackberry and the other hand locating the nearest Prius dealership on your iPhone’s GPS, all the while talking to Best Buy on your Jawbone bluetooth earpiece about your 42-inch HD plasma TV? That was a moment to truly appreciate the staggering speed of technology’s march towards progress.

Now imagine you were doing all that while sitting on the toilet. Whoosh, one flush just ended technology’s march forward. Why? Because, despite the amalgam of technological advancements in phones, televisions, transportation, and the Internet, the one item we use everyday, multiple times a day – the ubiquitous toilet – has remained in the technological dark ages for centuries here in the U.S.

Think about it. The modern flush toilet system was designed in Great Britain in 1596 by John Harington (known as Queen Elizabeth I’s “saucy Godson”), and was popularized in the 1880s with the success of Thomas Crapper’s toilet manufacturing company. (No, that’s not where the word comes from.) Beyond advanced valves and low-consumption flushing, today’s American toilets are pretty similar to Crapper’s models. That’s over one hundred years without a major refresh!

For those that cry “if it ain’t broke, don’t fix it,” they should check out a washroom in Japan. The toilet may be the forgotten appliance in the U.S., but as a nation that has a cartoon show teaching potty training to kids (check out Pants Pankuro), Japan takes their toilets very seriously. The Japanese company Toto is the world’s largest toilet manufacturer and sells the world’s most advanced toilet, the Neorest 600.

One look at the online demo and you will see that the Neorest 600 may actually live up to being called a throne. To start, a motion sensor detects when you approach and automatically opens the lid. Your seat has the option of being heated, which you can manage from a wireless remote control that handles all of the Neorest’s functionality. When you’re finished, you control the position and pressure of a self-cleaning nozzle that washes you, front and back, with a warm water spray, and subsequently dries the area with bursts of warm air. Also, the bowl’s architecture helps initiate a cyclone flushing pattern that results in low water consumption (six liters per flush) and zero lag time for further use (no waiting for water to refill). The bowl has its own internal deodorizer, and when you get up to leave, the lid closes on its own.

Now, that is progress! This type of porcelain magic will cost you around $5,000. Most Japanese cannot afford this model, but still have washlets (as they call them) with similar functionality. Toto has very recently began aggressively marketing the Neorest line in Europe, citing the product as relevant for today because its water nozzle washing eliminates the need for toilet paper, which would save money and help the environment. Toto has already tried for years to promote their washlets in the U.S., but beyond high-end consumers, the no-toilet paper lifestyle has not caught on. Perhaps recent economic and environmental pressures will lead Americans to reconsider and join the modern era of toilet technology, especially when men, in particular, realize that this gizmo can be programmed to automatically put the toilet seat down when you walk away.

So, are you ready to take the plunge?