Don't like your government? Maybe it's time to make one of your own 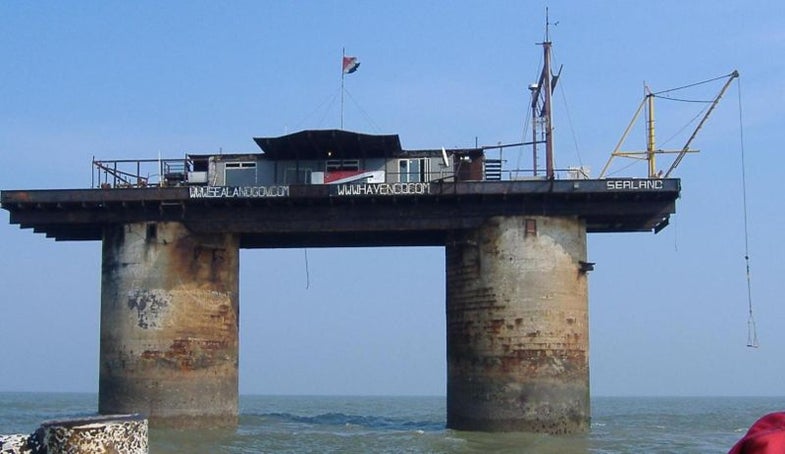 Economy got you down? Not sure if this whole “American capitalism” thing is working out for you? Looking for cheap housing? Well, you can always start from ideological scratch and build a new society on a free floating platform in the high seas.

Sounds nuts? Well it’s not to the Seasteading Institute, who is trying to make this utopian fantasy a reality. Backed by billionaire entrepreneur Peter Thiel (a PayPal co-founder) and run by Patri Friedman (grandson of Nobel prize winning Chicago economist Milton Friedman), the Institute’s goal, as stated on its Web site, is to “build a new frontier, a place where those who are dissatisfied with our current civilization can go and build a different (and hopefully) better one.” The eventual goal is to foster better government using free market principles. The Institute asserts that the challenge of experimenting with different governmental models is the high cost of switching (just try and get Australian citizenship) and high barrier of entry in starting a new nation. With seasteads, the idea is that people can sample a myriad of free-floating societies with different governmental structures, and this marketplace of social philosophies will lead to better societies. Don’t like the enlightened despotism of Seastead A? Then, move to the green-socialist colony on Seastead B!

Okay, still sounds crazy? Well, the concept is not as far fetched as it may seem, and there are existing real world examples. The idea of “seasteading,” creating permanent, politically-independent dwellings at sea, is an old one and based on the international legal principle that, outside of the exclusive economic zone (generally extending a set distance from the terrestrial borders of a country), the international waters or “high seas” are not subject to the laws of any nation except for the home flag of the ship in those waters. If the ship or dwelling does not fly the flag of a recognized nation, then technically it is not under any national jurisdiction if it remains in the high seas. So if you drop anchor in the right spot and have the means, you can begin your own society.

This is the (disputed) legal basis for Sealand, a self-declared micronation established when former British radio host Paddy Roy Bates took over the abandoned British World War II sea fort off the British coast in 1967. Although not recognized as a sovereign state by the UN, it operates as a constitutional monarchy by Prince Michael Bates, son of the founder/squatter of Sealand, and has been for the most part left alone by the British government. Sealand has had a colorful history, including issuing its own coins and stamps, establishing an offshore internet hosting facility or “data haven” that mysteriously disappeared, and hosting sporting events such as the annual international egg throwing championship and a 2008 Red Bull Extreme Skateboarding competition.

One look at Sealand and you will see that it is not likely what the Seasteading Institute has in mind for its sea-based utopias of the future. The Institute is not interested in squatting old military rigs, but rather in engineering new free floating cities that would provide a self-sustaining habitat and economy, much like any nation. Despite its political ideals, the Institute understands that eventual acceptance of seasteading starts with practical implementation. So they are beginning their ambitious agenda by focusing on incremental engineering achievements. This plan starts with designing and building small model seasteads that will demonstrate the viability of the larger design (i.e. prove through working models that they can achieve stable flotation, ballast control, mobility, synchronization, and habitability). If all the stages prove successful, they will build their primary prototype, the ClubStead, a 200-room hotel/resort to be located off the coast of San Francisco (and whose design they patented last month).

Of course there are a myriad of engineering, financial and political pitfalls that will have to be addressed along the way. But even a cursory glance at the Seasteading Institute’s Web site and the work already invested in these ideas, and it’s clear they are committed to making this dream a reality.

In the meantime, we can all look to Sealand for some real world guidance. One recent issue has been defense. Just this month, a British newspaper reported that a self-proclaimed German despot named King Marduk has claimed to have taken over Sealand and plans to demolish it and rebuild a Dubai-style resort replete with windfarms and a modern communication platform. Sealand’s Prince Michael has denied any such hostile conquest. Perhaps, he should take some defense advice from the Seasteading Institute. In a white paper entitled “Seasteading: A Practical Guide to Homesteading the High Seas,” the Institute recommends cost effective defensive measures: “For example, sea-skimming anti-cruise ship missiles like the Chinese silkworm are fairly cheap and quite effective.”