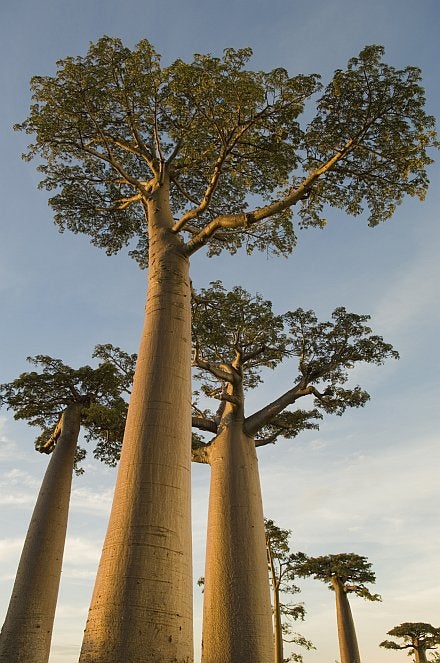 These baobab trees, native to Africa and Australia, are an important part of the Madagascar deciduous forest. Some baobabs are believed to be thousands of years old, but since the wood does not create annual growth rings, it is difficult to track their growth. The trees are a hardy breed though, with some Madagascar species growing directly out of limestone rock. Warwick Sloss
SHARE

Trees are great absorbers of carbon dioxide from the atmosphere, and inhibitors of climate change — that’s why treehuggers hug them so much. But leave it to humanity to engineer a better tree. A synthetic tree, currently being tested as a prototype, ensnares carbon about 1,000 times faster than a real tree.

The “tree” uses plastic leaves that capture the carbon dioxide in a chamber. The carbon dioxide is then compressed into liquid form. The tree captures the carbon without the need for direct sunlight, which means that, unlike traditional trees, the synthetic trees can be stored in enclosed places such as barns, used anywhere, and transported from one site to another regardless of conditions.

Klaus Lackner, a professor at Columbia University who is developing the tree, met with U.S. Energy Secretary Steven Chu last month to talk about the concept. In an interview with CNN, Lackner said the synthetic tree is “several hundred times better at collecting CO2” than windmill generators. Lackner says that for every 1,000 kilograms of carbon dioxide collected, the tree emits just 200 kilograms. This ratio is more than enough to warrant the relatively high cost of building the trees (about the same as a new automobile) or retrofitting coal plants.

Each synthetic tree could collect about 90,000 tons of carbon per year.