The herbicide uses some ingredients that sound like they could have come from a gritty face wash. 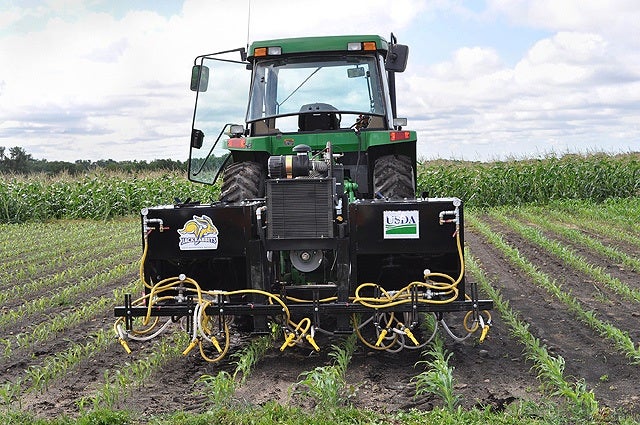 One U.S. Department of Agriculture researcher is experimenting with a sandblasting-style method of killing weeds that could be certified organic, Minneapolis’ Star Tribune reports. Agronomist Frank Forcella is blasting weeds with a spray of ground-up corncobs, walnut shells, corn gluten meal and other plant material. Sounds like he’s exfoliating the weeds to death.

Working with engineers at South Dakota State University, Forcella has even developed a tractor-mounted nozzle system that blasts out organic grit using air pressurized to 100 pounds per square inch. Take that, lambsquarters!

So how does this extreme exfoliation hit weeds, but not the crop you’re trying to protect? Strangely enough, Forcella’s weed-killing method, called “Propelled Abrasive Grit Management,” is indiscriminate. You do hit your crop, but the idea is that you use the technique on hardier crops that won’t sustain too much damage. Forcella has published a peer-reviewed paper that found his grit-blaster doesn’t harm corn, and results in higher corn yields than weeding by hand. Another researcher, Sam Wortman at the University of Illinois, has found Forcella’s method works with tomato and pepper plants, the Star Tribune reports.

Propelled Abrasive Grit Management needs more research before it’s ready for commercial farms, Forcella and Wortman both told the Star Tribune. Researchers will likely want to answer questions such as: What’s the optimal distance from which to blast weeds? What’s the optimal time to blast weeds? Can we blast weeds more cheaply? Here’s one tantalizing possibility: Instead of using inert materials such as corncobs, Forcella has tried blasting crops with corn gluten meal, which is gritty, but fertilizing. That means organic farmers could kill weeds and fertilize with the same process. From the crop’s point of view, I wonder if it’s a bit like getting smacked really hard in the face… with chocolate cake.