Saving the Seas: Fixing the Water Cycle Is the Key

Ocean "desert" areas, pinpointed on the map above, grew from 17 million square miles in 1998 to almost 20 million in 2007. Graham Murdoch
SHARE

As the atmosphere warms, the water cycle—the process by which seawater evaporates, rains down, and then evaporates again—will intensify. Everywhere, the ocean surface will become, on average, saltier. The extra evaporated water vapor will rain down disproportionately in areas such as the tropics and Scandinavia, bringing stronger storms and more frequent floods. Meanwhile, the areas just north and south of the tropics, which already tend to be saltier than other regions, will become saltier and warmer. In the very saltiest areas, existing “desert” areas—those too salty to host most life—could grow.

The salt fountain raised chlorophyll levels a hundredfold.So far, scientists have been able to do about as much to reverse the intensification of the water cycle as they have to control any other aspect of the weather: not much. But one technique, Ocean Thermal Energy Conversion, or OTEC, might help. In the 1970s, engineers began using platform-based rigs to bring cold, deep water to the warm surface; the idea was that the temperature difference would drive a heat engine, generating energy. Used on a large scale, OTEC could have the healthy side effect of lower the surrounding surface temperatures, and that would be a very good thing.

“If we lower the seasonal surface temperature, then we should expect the water cycle to become less intense,” says Ray Schmitt, an oceanographer at Woods Hole. The first wave of OTEC research died when the last demonstration plant closed in 1998, but now an OTEC revival might be under way. Since 2009, the U.S. Navy has paid Lockheed Martin $12.5 million to develop a commercial OTEC plant near Hawaii; an international consortium is considering building another plant in Tahiti. 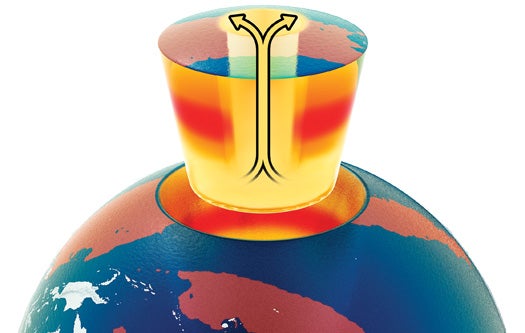 A “perpetual salt fountain” could pull relatively fresh, nutrient-rich water [light yellow] from the deep ocean to the surface, creating oases in the middle of marine deserts.

In the saltiest areas, pulling water from the deep might help create life-rich oases. In 2002, researchers at Tohoku University in Japan began testing a “perpetual salt fountain,” a thin pipe that transports less-salty water from the deep to the much saltier surface. Cold water enters the bottom of the pipe, warms, and then rises—but as it warms, it remains relatively fresh and rich in nutrients that stimulate the growth of chlorophyll and phytoplankton. For their project, the Japanese researchers have deployed a floating, GPS-equipped, 984-foot PVC pipe in the Mariana Trench area in the Pacific Ocean, and the early results are promising.

“Just outside the pipe, the concentration of chlorophyll was enormous,” says Shigenao Maruyama, the head of the research team. “About 100 times larger than in the surrounding sea area.” Like OTEC, the salt fountain would be only a stopgap measure—a way to treat the symptoms of global warming rather than a solution to the underlying problem. But Maruyama is optimistic about the salt fountain’s potential to repair damage on a local scale, and the experiments are scheduled to continue next year with a new salt fountain in the open ocean.