It'll trap tons of CO2 from a coal-fired power plant ... and then use it to mine for more fossil fuels. 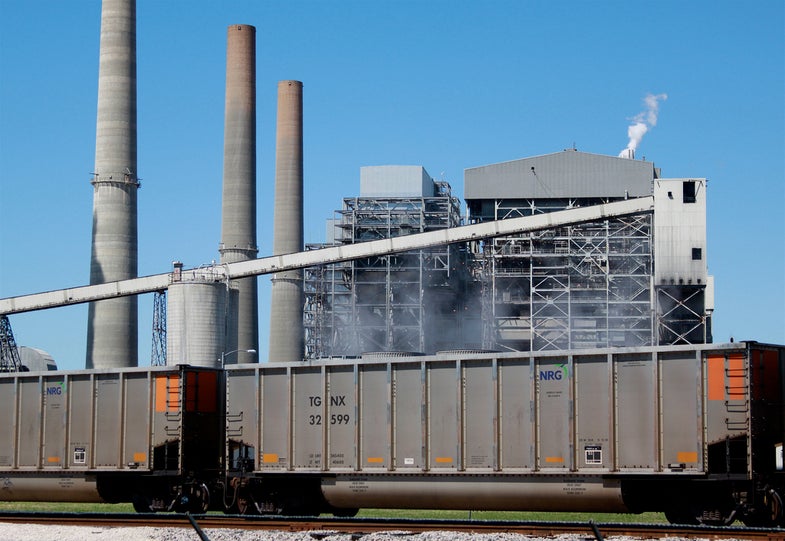 What will eventually be the world’s largest carbon capture facility has started construction near Houston, Texas.

The Petra Nova system will collect carbon dioxide leaving an existing coal plant by spritzing the plant’s exhaust with a chemical solvent. The purified carbon dioxide then gets compressed into a liquid and piped 80 miles away to an active oil field. Once there, the carbon dioxide gets piped underground, where it helps force oil to the surface. So, yes, Petra Nova captures carbon dioxide to help people mine ever more oil, which creates its own emissions once it’s burned to make electricity.

That’s not ideal, but experts who support such projects say they’re a necessary step. Projects similar to Petra Nova, in the U.S. and elsewhere, have been stymied by their high costs, Yale Environment 360 reports. Petra Nova’s engineers hope the system will eventually pay for itself because it’s linked to increased oil production, the Houston Chronicle reports. That, in turn, could encourage other companies to adopt the technology and improve it.

Critics worry sequestered carbon dioxide will eventually find its way up to the surface of the Earth and back into the atmosphere, as NPR reported in 2012. Oil field-linked projects may also prove unhelpful to global warming in the long term, if it encourages people and nations to continue to use fossil fuels.

The project is expected to capture 1.6 million tons of carbon dioxide annually, which equals about 40 percent of one of the coal plant’s units, the Houston Chronicle reports. The plant, called the W. A. Parish Plant, has four units.

Besides Petra Nova, a handful of similar projects are underway around the world. Yale Environment 360 reports there are pending projects in Saskatchewan, Mississippi and Illinois, plus 34 “proposed or operating” projects outside of North America. The Saskatchewan system is supposed to go online later this year. Petra Nova is slated to open in 2016.