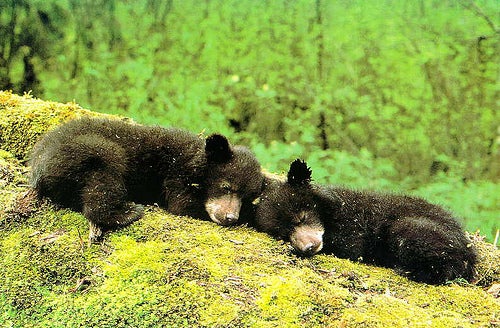 Lazy? Shy? Live in a cave? Those might not be positive attributes for the average human, but they sure are good for animals trying to survive in a changing environment. According to a new study in the journal_ The American Naturalist_, beasts that hibernate, burrow, or crawl into holes in things are less likely to be listed as endangered than those that don’t.

Intrigued from a previous study on extinct animals, which showed that species exhibiting “sleep or hide” (SLOH) behaviors did better than others, the study authors wanted to see if the same was true of modern creatures like moles, chipmunks and bears. To find out if our more timid and torpid animals have a leg up in the survival game, researchers made a master list of 443 sleep-or-hide mammals. Hiders and sleepers actually tend to overlap significantly, they report in their paper, as sleepy animals need a place to sleep, and burrowing animals often develop hibernation-style traits to survive underground. Many of the animals on the list were both sleepers and hiders, or some combination of the 9 types of SLOH behavior the authors identified.

With their list in hand, the team then compared their 443 to the “Red list” of endangered species published by the International Union for Conservation of Nature. As suspected, a sleepy, or hiding animal was less likely to be on the red-list than a regular animal, and a red-list animal was also less likely to be a SLOH-er.

This makes a lot of sense, they report, as animals that hide away in a cave or a tree stump are buffered by their physical shelters from a variable environment outside, while hibernators enjoy a flexible metabolism that can help them adapt to a changing climate.