To Harvest Natural Gas From the Ocean, Shell Is Building the World’s Largest Man-Made Floating Object

Shell is making good on its promise to build the largest object ever to float on water, announcing Friday it... 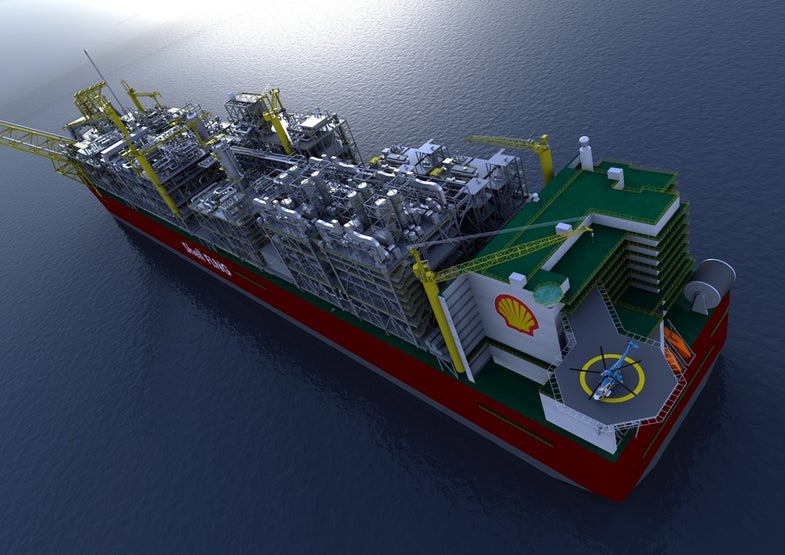 Shell is making good on its promise to build the largest object ever to float on water, announcing Friday it would build the Prelude FLNG Project to harvest offshore natural gas fields. The gargantuan ship will suck up the equivalent of 110,000 barrels of oil per day.

The floating liquified natural gas facility will dwarf the biggest warships, weighing in at 600,000 metric tons. By contrast, the U.S.’ next-generation Ford-class supercarrier will displace 101,000 metric tons of water. Shell says its ship will be able to withstand a category 5 typhoon.

In some ways, it’s more of a mini-island than a ship, designed to be moored in the same spot off the northwest coast of Australia for 25 years. The facility will be one-third of a mile long — longer than five football fields laid end-to-end — and will contain 260,000 metric tons of steel, about five times the amount used to build the Sydney Harbour Bridge.

The ship will chill the natural gas to -260° F to reduce its volume by 600 times, enabling it to be shipped to customers throughout Asia, according to Shell.

Shell did not disclose the cost of building the project, but said it would be built at Samsung Heavy Industries’ Geoje Island shipyards in South Korea, one of the few shipyards in the world capable of building such a monstrous vessel. 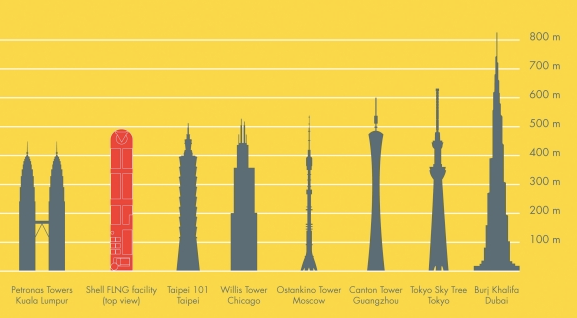 Once it is built, the Prelude will be towed to its station about 300 miles northeast of Broome, Australia, and hooked up to the massive Prelude natural gas field, which Shell discovered in 2007. Shell anticipates production to start in 2017. The facility will tap into about 3 trillion cubic feet of natural gas, the company said.

Without an oceangoing facility, it would be impossible to harvest natural gas that far from land, Shell said. The Prelude will be the first facility of its kind, but not the last — the design can accommodate a wide range of gas fields, said Malcolm Brinded, executive director for Shell’s Upstream International, in a news release. So someday, massive floating gas factories could be deployed in various oceans throughout the world.