It's a 0.4 percent risk, up from the general 0.01 percent of being crushed by space junk here on Earth. 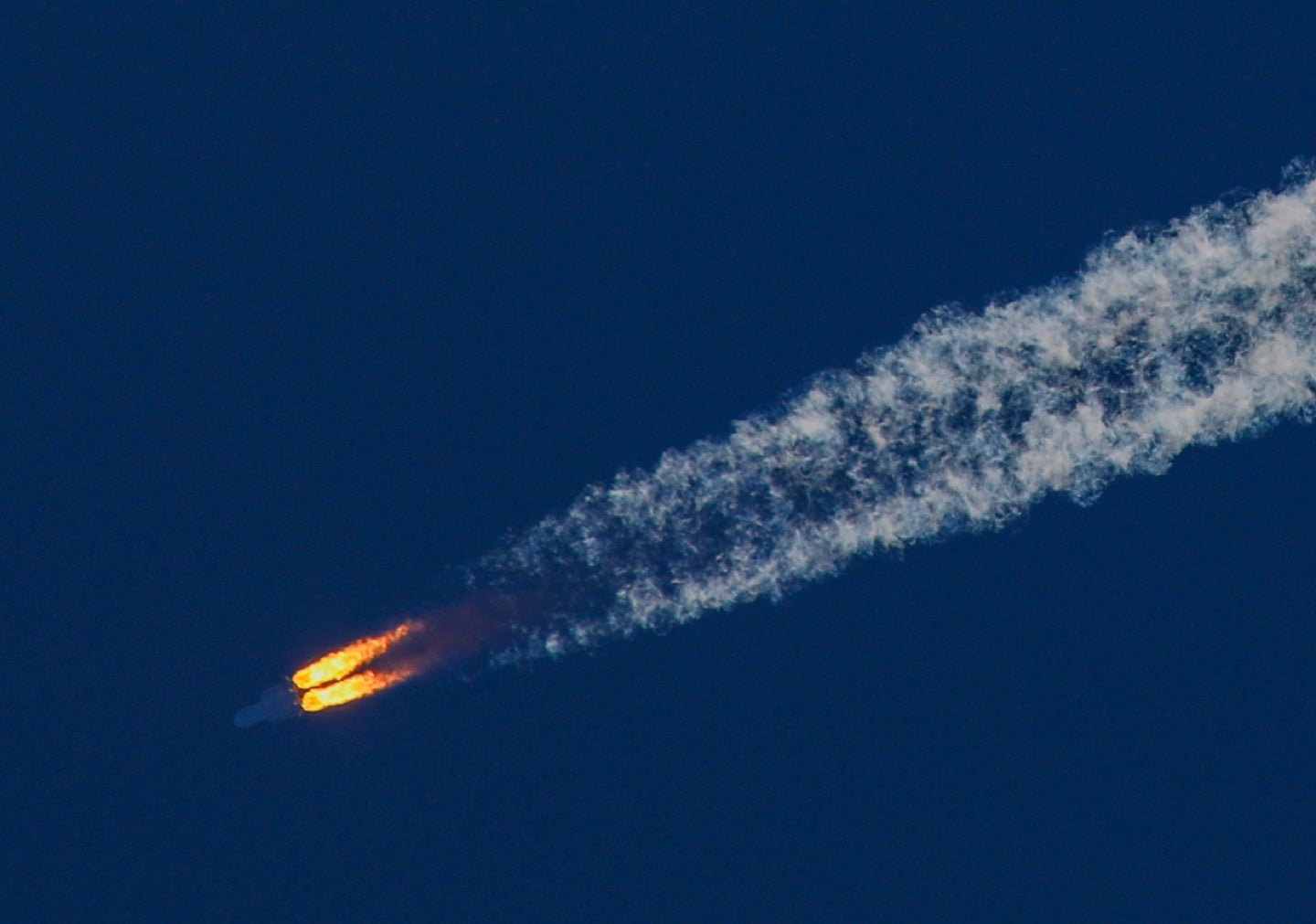 A Long March-5B-3 carrier rocket with the WENTIAN experiment module blasted off on July 24 from the Wenchang Space Launch Site in Wenchang, Hainan Province, China. Now, the booster is headed back down to Earth but doesn't have a specific landing site. CFOTO/Future Publishing via Getty Images
SHARE

The weekend forecast looks cloudy with a chance of raining space debris. On July 24, China launched its Long March 5B rocket to carry a laboratory module for the Tiangong space station it’s currently constructing. As it falls back to Earth, astronomers predict the 23-ton rocket body will break up into pieces big enough to survive the atmosphere. About 75 percent of those crash landings should be in water, desert, or jungle, making it unlikely to harm a person or damage any property. But the exact trajectories are not fully known.

Last week’s launch was the third time China used the Long March 5B rocket model since debuting it at the pad in 2020. In the first flight, the rocket’s entire main-core stage reached low orbit, allowing atmospheric friction to drag it back down to Earth and disintegrate most of the parts.

This isn’t the first time China has been responsible for falling space junk. In May 2021, the second booster of the Long March 5B rocket launch landed in the Indian Ocean near the Maldives, but caused no injuries. In an incident the previous year, remnants of a separate Long March 5B hit the Ivory Coast, causing damage to several buildings in the African country. The reason both events were so disruptive is likely because the rocket model is not designed to dispose of itself and have a controlled reentry.

[Related on PopSci+: How harpoons, magnets, and ion blasts could help us clean up space junk]

NASA and other space agencies have gone through similar trials and tribulations, but have since taken extra steps with their rocket designs to minimize large space debris from plummeting back to the home planet. The US has criticized China’s negligence and its irresponsibility to maintain safe conditions in orbit and in the atmosphere. “Spacefaring nations must minimize the risks to people and property on Earth of re-entries of space objects and maximize transparency regarding those operations,” NASA administrator Bill Nelson said in a press statement after the Long March 5B firestorm in May 2021. “It is clear that China is failing to meet responsible standards regarding their space debris.”

Responding to criticism, China accused American officials of overexaggerating the chances of the current rocket core freefalling back to Earth. “The US and a few other countries have been hyping up the landing of the Chinese rocket debris over the past few days,” said Hua Chunying, a senior spokeswoman at China’s Ministry of Foreign Affairs, per the New York Times. “To date, no damage by the landing debris has been reported. US experts put the chances of that at less than one in a billion.”

[Related: What happens when a rocket hits the moon? It’s not always what astronomers predict.]

The latest Long March 5B is predicted to crash down as soon as July 30. Astronomers placed the risk as fairly low with a one-in-230 chance of someone getting hit or killed from the falling pieces. Still, the chances are higher than the usual one-in-10,000 risk of being crushed by space junk on the ground. “The worst case in this event is going to be less serious than a single cruise missile strike that we’ve been seeing every day in the Ukraine war, so let’s put it in some perspective here,” Jonathan McDowell, an astrophysicist and satellite tracker the Harvard-Smithsonian Center for Astrophysics, said during a July 28 social media livestream.

Right now, the rocket core is expected to make impact in a remote area that’s 1,240 miles long and 44 miles wide. Astronomers will have more answers on its landing site when it gets closer to re-entry.