What the heck is a Space Force? We finally (sort of) know. 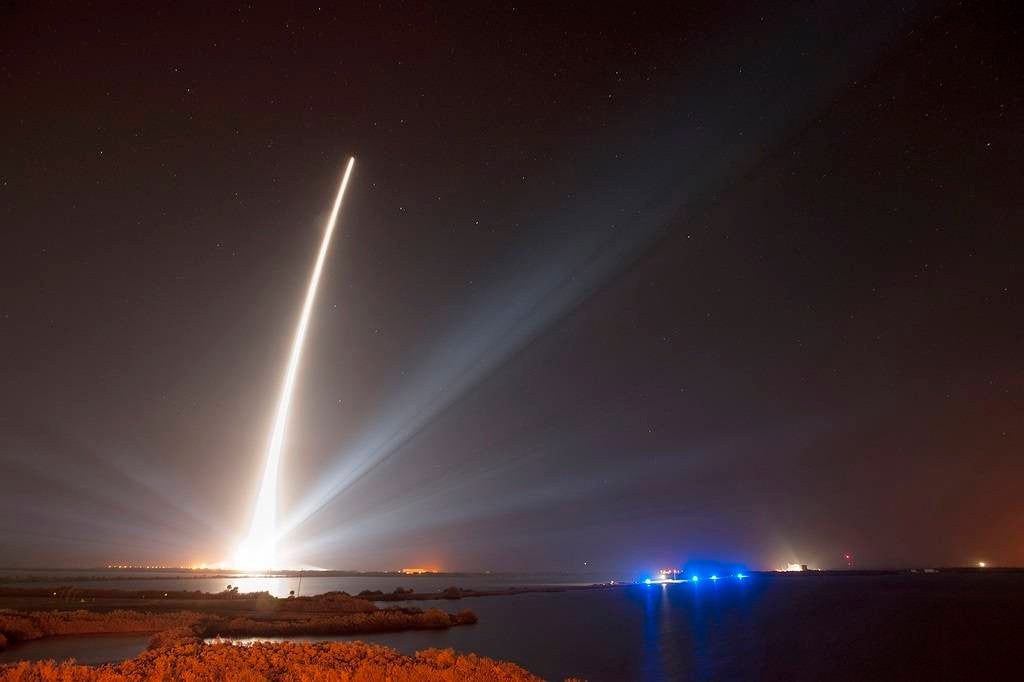 A Delta IV rocket launch from Cape Canaveral Air Force Station in 2014. A new proposal would break off space operations from the Air Force and other parts of the military and consolidate them in a Space Force. United Launch Alliance photo by Ben Cooper
SHARE

In an announcement at the Pentagon today, Vice President Mike Pence and Defense Secretary James Mattis outlined the basic structure of the administration’s proposed Space Force.

The plan expanded on President Donald Trump’s unexpected directive issued to the Commander of the Joint Chiefs in June. During a routine meeting of the National Space Council on June 19, Trump surprised the room of dignitaries, space experts, astronauts, and representatives of the aerospace industry by announcing that he wanted to create a sixth branch of the military that he referred to as the Space Force.

“Space is one of our vital national interests,” Mattis said, comparing it to land, sea, and cyberspace as a war-fighting domain.

Pence evoked growing security threats in space as a rationale for creating this new Space Force. He cited China’s 2007 missile test that destroyed one of its own satellites, and evidence that both China and Russia are actively looking for technologies that could interfere with or disable United States space-based systems, either through ground or space-based means, including increasing satellite maneuverability to interfere with the satellites of other nations, and hypersonic missile development, which China tested last week.

“As of today, I think there is little ambiguity left that the U.S. administration would like to have a space force as a sixth branch of the military,” Saadia Pekkanen, director of the Space Security Initiative at the University of Washington’s Henry M. Jackson School of International Studies, says in an email. “But there is still ambiguity about how it will be trained, whether it will be effective, and what it will mean in the rapidly expanding age of commercial space worldwide. It is easy to talk about space as a war-fighting domain, and about the need to defend and dominate. Nobody disagrees with that, since everyone knows dependence on space assets is America’s Achilles heel. But determining attack and attribution, and then fashioning a counter response, in the hazardous space domain, much less a conflict, is complicated to say the least. So we have to think about that very hard. And if we are going to fight, we have to start thinking also about what victory will look like in space,” she adds.

In addition to commercial satellites, there are international governmental space missions, too. The largest and longest-standing space venture in human history, the International Space Station, is a joint venture between Russia, the United States, Canada, and other space-faring Nations. The United States, which has been unable to launch astronauts into orbit since the Space Shuttle program ended in 2011, currently relies on Russia’s Soyuz craft to travel to the ISS.

It remains unclear how the announcement of these new details of the Space Force will play out internationally. After the initial announcement in June representatives from both Russia and China expressed alarm at the prospect of an arms race in space. But both China and Russia also reorganized their militaries back in 2015, elevating space as a military priority for both nations.

“We have moved from merely space situational awareness to battlespace awareness. Following America’s clear lead on the space force, the trends toward some sort of dedicated military units will only continue to be reinforced in all the major space powers today, including those in Asia where we find some of the most competent and ambitious space powers around,” Pekkanen says. “There is little doubt that other countries—say, China with its ‘celestial military’ idea, Japan with its ‘space surveillance force’ idea—that want to preserve and secure their space-based advantages might be galvanized to move down that road faster than before.”

Just to get it out of the way, this will not involve crews of space soldiers. “The Space Force is only about national security space, and all of our national security space is unmanned, it always has been,” says Todd Harrison, director of the Aerospace Security Project at the Center for Strategic and International Studies. NASA, which is focused on science and exploration, will have nothing to do with it, and the Space Force will not involve human spaceflight efforts.

The new efforts will entail the creation of a Space Operations Force drawn from space experts within the military focused on national security. It also involves the creation of civilian oversight as an assistant secretary of defense, a Space Development Agency focused on developing new technology for space (the output of which Pence likened to the development of ICBM’s and the Navy’s nuclear systems), and a United States Space Command which is intended to “improve, evolve, and plan space warfighting.”

“One of the main things the Pentagon unveiled today is that they’re creating Space Command, which is a combatant command. The job of a combatant command is to employ the forces provided by the services. Space Command is not a substitute for a Space Force,” Harrison says, likening it to the relationship between Central Command, which oversees military operations in the Middle East, and the Army.

Currently within the Department of Defense, there is already a Combined Space Operations Center, established last month, that is designed to coordinate defensive efforts in space between the United States, its allies, and commercial parties. The proposal would elevate space command within the military hierarchy.

As for the Space Force itself, this proposal takes baby steps toward its establishment. The Space Operations Force will essentially be an inventory of all the people and organizations within the military that focus on space. “They’re going to identify them and create a community of sorts. Then if they eventually do create a military service for space those are the people and organizations that would move into a new service,” Harrison says.

Not all positions can neatly be classified as space vs. not-space, says Harrison, pointing out that some groups—like those working on missile defense or intelligence—are more difficult to sort than others. Others, like many of the Air Force’s space operations, are more likely to fit into the new system.

Pence reiterated that the administration’s stance towards the area beyond our atmosphere is superiority over others. He quoted Trump as saying: “It is not enough to have an American presence in space, we must have American dominance in space.”

In his speech, Pence noted that Congress is required to act before another branch of the military can be created. The White House budget for next year (which will be presented in February) will allocate some money for the Space Force, but it’s unclear what the cost of establishing the branch would be (though Pence called on Congress to invest an additional $8 billion in space security systems over the next five years). It is also unclear if the proposal will garner the needed support in Congress to begin standing up the force in 2020, the administration’s target date. “Even if they start in 2020, it will probably take several years before its fully in place. It’s not going to happen overnight,” Harrison says.

A proposal for a Space Corps last year passed the House, but not the Senate, and was opposed by leaders of the Air Force, and by Mattis. He now says he is in complete agreement with the administration.

Others still have their doubts.

Former astronaut Mark Kelly said on MSNBC that while the nation should take threats (especially from China) seriously, there is already a group within the Pentagon capable of handling the peril. “There is a threat out there, but it’s being handled by the US Air Force today. (It) doesn’t make sense to build a whole other level of bureaucracy in an incredibly bureaucratic [Department of Defense],” he said.