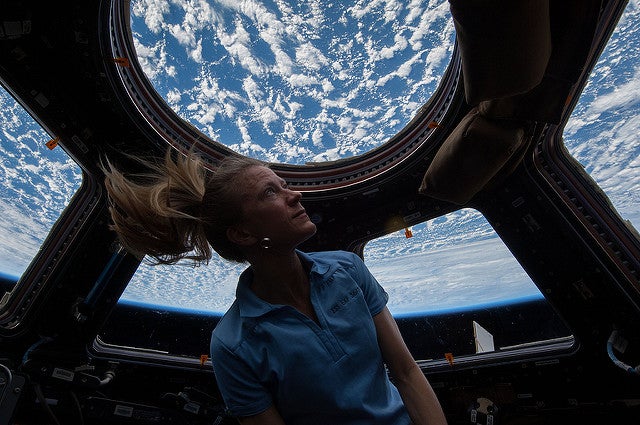 NASA astronaut Karen Nyberg, Expedition 37 flight engineer, enjoys the view of Earth from the windows in the Cupola of the International Space Station. A blue and white part of Earth is visible through the windows. NASA
SHARE

Close your eyes and picture what the Earth looks like.

You’re probably picturing a circle, mostly blue thanks to the ocean, with swirls of clouds and the occasional green and brown land mass. The entire sphere is floating in a mass of impossible black. You’re picturing Earth in a way that you’ve never actually seen with your own two eyes. Maybe you’re getting the sketch from this famous shot, below, known as the blue marble image. Astronauts aboard the Apollo 17 space mission snapped the picture on December 7th, 1972. Countless other images of our home planet have been taken, which have forever shaped our imagination of it. Still, only a handful of humans have seen it with naked eyes.

Almost without exception, those humans (mostly astronauts), say the experience of seeing the Earth from outer space profoundly changes who they are as a person. It makes the Earth feel more precious, they say, our human grievances seem pettier, and the environmental damages we are causing to the planet, graver. Today is World Environment Day, or what the United Nation’s calls the “people’s day” for doing something to take care of the Earth. But in order for us to take care of the Earth, we first have to remember why the Earth matters. And what better way to do so than a gallery of stunning images of the Earth from the outside combined with words that encapsulate the perspective of those who have had the fortune to see the planet first hand from this unique perspective. Enjoy.