Don’t worry, this magma is cool to the touch. 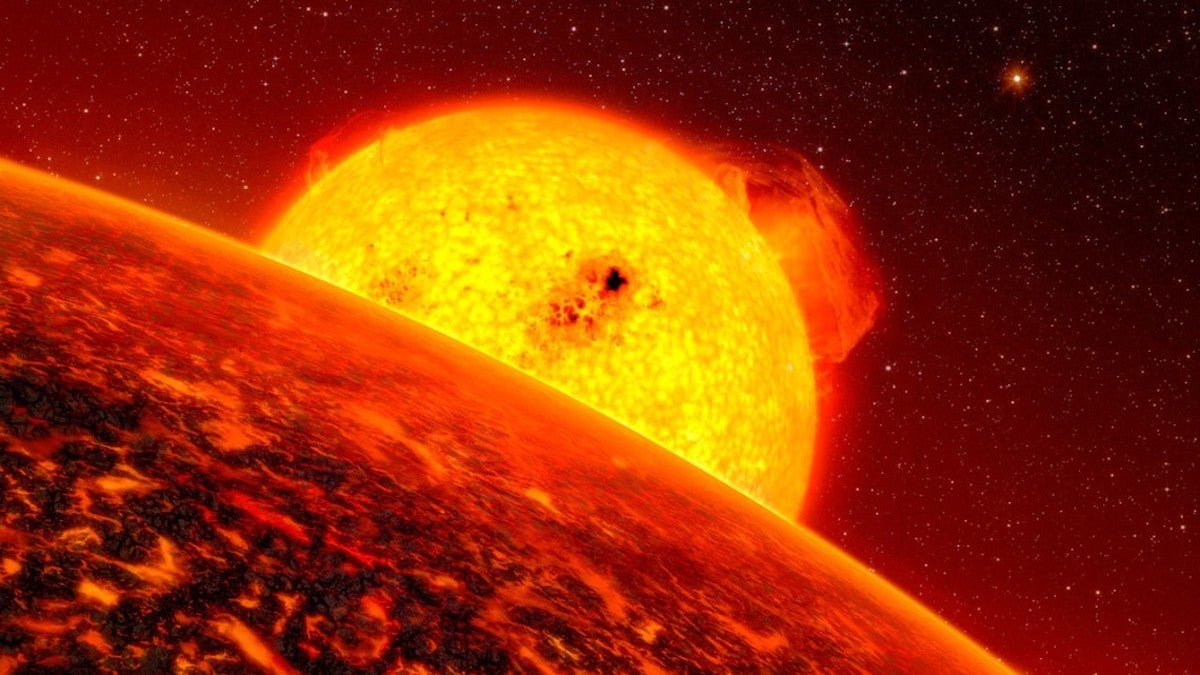 In this illustration, exoplanet CoRoT-7b, which is likely five times the mass of Earth, may well be full of lava landscapes and boiling oceans. European Southern Observatory/L. Calçada
SHARE

Scorching heat, pillars of darkened ash, gushing lava fountains. Volcanic eruptions on Earth are paradoxes of life and death, though they are nothing compared to entire planets embalmed in such a nightmare.

Lava worlds and other volcanically active bodies are some of the most enthralling cosmic destinations astronomers have ever discovered, and still some of the most scientifically elusive. The James Webb Space Telescope’s first batch of findings could reveal their secrets in greater detail, when paired with research already in the works. In an upcoming issue of the journal Monthly Notices of the Royal Astronomical Society, a team of scientists at Cornell University took existing atmospheric and surface composition data to understand the mantles—or the interior—of 16 different exoplanets by modeling and synthesizing them here on Earth. They were able to create and cool artificial lava from other distant locales in our universe inside the lab, no volcanic eruption required.

Given that exoplanets are difficult to reach by even our farthest traveling space probes, there have rarely been experimental studies done on these faraway worlds, says Esteban Gazel, lead author of the study and engineering professor at Cornell University who studies geochemistry and volcanology. His team’s new research is the first to provide a “library of composition” for potential exotic exoplanet surfaces—a rolodex of building blocks that exoplanet hunters can reference in their search for faraway planets and fiery space environments. In their lab, Gazel and his colleagues meticulously combined star metallicity data, thermodynamic modeling algorithms, and physical experiments to whip up their synthetic lava batches using different measurements of starting chemicals like magnesium oxide, iron oxide, and silicon dioxide. The final result were several porous igneous rocks, crystallized magma with glass and minerals you can touch without burning your limbs off.

Eventually, astronomers could use the team’s data from the lava experiments to interpret the inner-makings of different exoplanets. In the future this interplanetary brochure could even be used to shed light on Earth’s red-hot beginnings. “There are so many exoplanets out there in different evolutionary stages,” says Gazel. “If we can figure out their composition, it will give us a lot of information about how our planet evolved.”

Before the dawn of its glittering blue oceans and towering green forests, Earth too was a lava planet—molten and uninhabitable. At one point in its 4.5 billion-year lifetime, the planet might have resembled the hellish landscape of other super-sized Earths, like 55 Cancri e residing some 41 light years away. Today, we know that volcanoes are vital to spawning and sustaining life, as these volatile processes help with atmospheric cooling, land formation, and turning dead dirt into fertile flesh once more.

While using other planets to investigate our hot origins is hardly a new approach, it would be natural to expect alien planets to possess foreign elements—chemical compounds or materials that we would be unable to replicate on Earth. Yet Lisa Kaltenegger, co-author of the study and the director of the Carl Sagan Institute at Cornell and associate professor in astronomy, says that isn’t the case. She explains that while they may look different to the naked eye, many planets and stars in our celestial neighborhood actually hold the same celestial ingredients, just arranged in different ways.

“When we look at other stars, we see the disks around them that make the planets,” she says. “And so far in those disks, we haven’t found anything we can’t explain.” That means that their team was able to create all 16 synthetic surfaces with chemical materials easily found here on Earth. Kaltenegger says their work is only just beginning to create a larger picture of the cosmos, and will only continue to improve. They plan to pull in exoplanet data from the James Webb Space Telescope, which will become more precise over time.

Despite some calibration issues since the telescope’s initial data release, Karl Gordon, an astronomer at the Space Telescope Science Institute, says that such small setbacks are expected of any mission. The only difference this time, he says, is how quickly scientists are jumping on the data. “The best way to describe calibration is it’s an exponential,” he says. “Right at the beginning, it’s not so good, and then it quickly gets better and better.”

Kaltenegger agrees that the calibration issues are mere “stepping stones,” that will begin to clear up as JWST’s mission continues.

“I think the more time we have with the data, the better we’re going to be in actually finding out nuances that we don’t even see yet,” she says.

Correction (October 5, 2022): Information in the story originally implied that the new study used data from the JWST. We updated the language to clarify that the team plans to use JWST data in future experiments. An earlier version of this story misspelled Esteban Gazel’s name. We regret the error.